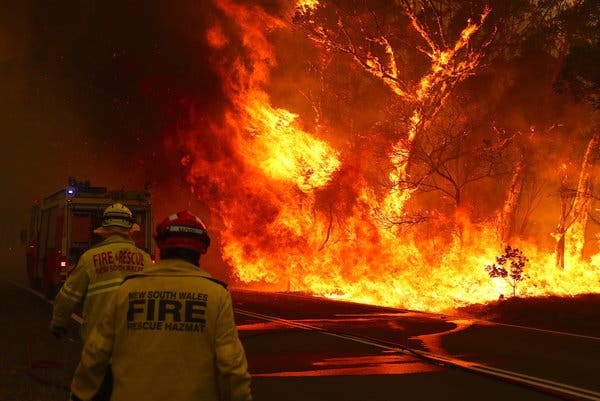 Mass evacuations are continuing across the lower half of Australia’s eastern coast due to devastating bushfires, with potentially catastrophic conditions expected later this week.

More than a dozen towns in the states of New South Wales (NSW) and Victoria have been ordered to evacuate, including popular tourist areas and national parks, causing massive traffic queues and petrol and supply shortages.

Traffic came to a grinding halt in some areas as thousands fled the South Coast region of NSW, according to the police, who overnight escorted 100 cars out of the area at a time.

In Victoria, catastrophic bushfires continue to tear through the north-eastern region. Some 1,000 people were being evacuated by the Australian Navy on ships on Friday morning.

The number of people unaccounted for in Victoria has increased to 28, while two more people have been confirmed dead in East Gippsland, Victoria Premier Daniel Andrews told a press conference on Friday.

“We’ve not had such large-scale fire activity, such a big fire edge, so many going fires, and then get another wave of really challenging weather a week or so later,” Andrews said.

Navy Commander Scott Houlihan told reporters that 60 people were flown out overnight from Mallacoota in Victoria, which has been cut off by bushfires since New Year’s Eve, forcing people to flee to the beach for safety.

More than 960 people had signed up for evacuation, he added.

“The fires were of such ferocity and intensity that it was very traumatic and people felt their lives were absolutely at risk,” Victoria’s Emergency Services Minister Lisa Neville said Friday.

“You should leave to save your life. If you don’t we will be sending out police to make sure you’ve got the message.”

The evacuation order in NSW has also affected tourists and visitors in the Snowy Mountains region, a popular holiday destination.

Local authorities have stepped in to address complaints of petrol and supply shortages, amid massive traffic logjams in the area.

Bushfires have been raising havoc in all six of Australia’s states and one territory.

Only the Australian Capital Territory has been spared so far.

In total, 19 people have died.