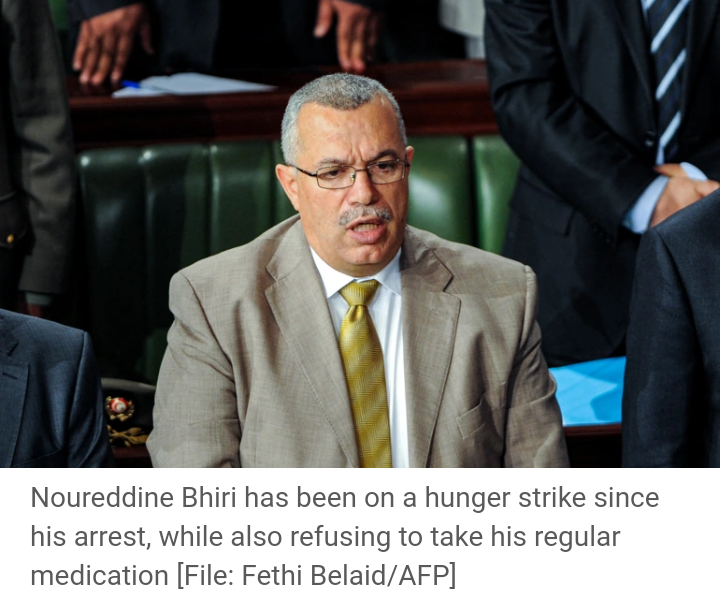 Doctors in Tunisia have expressed alarm about the health of Noureddine Bhiri, the deputy chairman of the Ennahdha party, who has been refusing food or medication since his arrest last week, a human rights body has said.

The 63-year-old, who was arrested by plainclothes officers on Friday and later accused of possible “terrorism” offences, suffers from several pre-existing health conditions and was hospitalised on Sunday. His lawyers have rejected the allegations as “totally false”.

Bhiri’s wife, Saida Akremi, and children have started a sit-in at the hospital where the former justice minister was admitted. Akremi said she will not leave the hospital unless her husband is with her.

Tunisia’s independent national body for the prevention of torture (INPT) said three of its medics had visited Bhiri on Wednesday afternoon.

Earlier in the day, he had agreed to be put on a fluid and medication drip, “but later he refused again”, INPT official Lotfi Ezzedine said.

INPT and Bizerte hospital doctors have “grave fears” of a deterioration in his health, Ezzedine said.

Ennahdha, the party with the largest number of seats in Tunisia’s frozen parliament, has called for Bhiri’s release and denounced his detention as an illegitimate attempt to silence political opposition in the country.

Tunisian President Kais Saied assumed sweeping executive powers in a series of moves that started on July 25 last year and his opponents have branded a coup.

Saied sacked the Ennahdha-supported government and suspended parliament, presented himself as the ultimate interpreter of the constitution and also took steps to rule by decree.

Bhiri suffers from hypertension and diabetes and has had heart issues. His blood pressure was still high and “his kidneys are beginning to struggle” due to dehydration, the hospital medics said. “Saying he is stable would be saying a lot,” they added.

Earlier on Wednesday, Ennahdha lawmaker Samir Dilou, citing medical sources, had told reporters that Bhiri was “between life and death” and that his wife and children were on standby.

“Those who ordered his kidnapping must assume their responsibilities,” he added, referring to Saied and his interior minister, Taoufik Charfeddine.