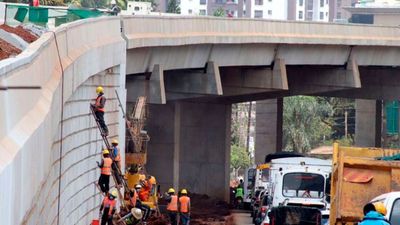 A few Chinese companies have amassed road and infrastructure contracts worth Ksh1 trillion ($8.8 billion) under the Jubilee administration while Kenyan contractors are left to fight for small roads and sub contracts.

Their speed, financing muscle and negotiation power has endeared them to almost all government departments, ministries and parastatals, which have seen them eat the lunch of local companies who the government accuses of shoddy jobs and uncompetitive bids.

Others include China Wu Yi, Synohydro, Jiangxi Engineering, China Railways 21 Bureau Group and Third Engineering Bureau of China City Construction Group that have earned hundreds of billions for projects across the country.

Local companies like S.S Mehta, H. Young, and Seco have been pushed to the periphery as Chinese firms secure lucrative road, rail, and electricity contracts.

The dominance of Chinese companies has left a bitter taste among local contractors who are now losing out even on county roads and real estate projects.

China’s influence on Kenya’s mega projects development started gathering steam with the construction of the Thika Superhighway between January 2009 and November 2012 at a cost of nearly Ksh32 billion ($282.6 milion) in the last term of President Mwai Kibaki.

CRBC and CCCC have since bagged the lion’s share of Kenya’s mega projects — at least two railways, two ports and 23 road projects.

They include a $3.5 billion (Ksh393.82 billion) standard gauge railway, a $398 million (Ksh44.78 billion) oil terminal at the Mombasa port and road projects such as Southern, Western, and Eastern Bypass in Nairobi and the A109 National Highway Project.

Transport Cabinet Secretary James Macharia did not pick our calls or answer text messages with related queries but in a televised interview he said Kenya preferred Chinese firms due to the speed of delivery and costs.

The Chinese, Mr Macharia said, are fast in terms of making decisions and implementation of projects, for instance the Nairobi Expressway was launched in October 2019 and it is 80 percent complete yet a European consortium to dual the Rironi-Mau summit that started negotiations in September 2016 has not

The Mombasa-Nairobi SGR was initiated on December 12, 2014 and completed on May 31, 2017, eighteen months ahead of schedule.

“If some of these projects are won by the Chinese it is because their bids are a lot more competitive. Kenol to Marua was open for competitive bidding, which is being done for total Ksh13 billion ($114.8 million).

“When we opened the bid for the first lot, the winning bidder was at Ksh7 billion ($61.8 million) but we had some European bidders which I will not mention which had gone up to Ksh18 billion ($159.01 million). So, when people say we are giving the Chinese, am I going to give a project for the sake of not giving Chinese at Sh18 billion when it could have been done at Ksh7 billion ($61.84 million) the same standard?” he asked.

Local contractors, however, say the reason the Chinese complete the projects in time is being paid immediately they undertake the job while Kenyan companies have to wait for years, accumulating pending bills.

They claim the Chinese firms are getting the contracts due to political influence and kickbacks.

“The truth is political kickbacks right now, no local tier-1 companies are getting any contracts. The idea was to encourage skills transfer but right now it seems like no Kenyan company has skills to do even basic roads,” the source said.

Oscar Otele, a University of Nairobi lecturer and governance consultant, says companies such as CRBC have been in Kenya since 1984 and have learned how business is done here and cultivated political and business links to help them secure contracts.

Through their business partners, they select projects and sell to the

government with a promise to help them source for funding from China and once they do those among the local businessmen who assured them of the project gets a cut.

“They are also better with costs; Western companies take time in long procurement processes, involve technical expertise involving their nationals coming to Kenya at a huge cost. The Chinese are flexible when negotiating and bring in cheaper labour who can stay in Eastlands in one bedroom units, lowering the cost of projects,” Dr Otele said.

US companies say since their operations are above board and they operate with a lot of scrutiny, it is difficult to engage the informal channels being used by the Chinese.

China’s State-linked firms are getting ahead partly due to Chinese government loans which has increased to $7.09 billion (Ksh797.77 billion) as at June last year as the country promotes investments abroad.

Chinese State Councilor and Foreign Minister, Wang Yi, is currently in Kenya to promote investments between the two countries with scheduled bilateral meetings with his Kenyan counterpart Raychelle Omamo and will also meet President Uhuru Kenyatta.