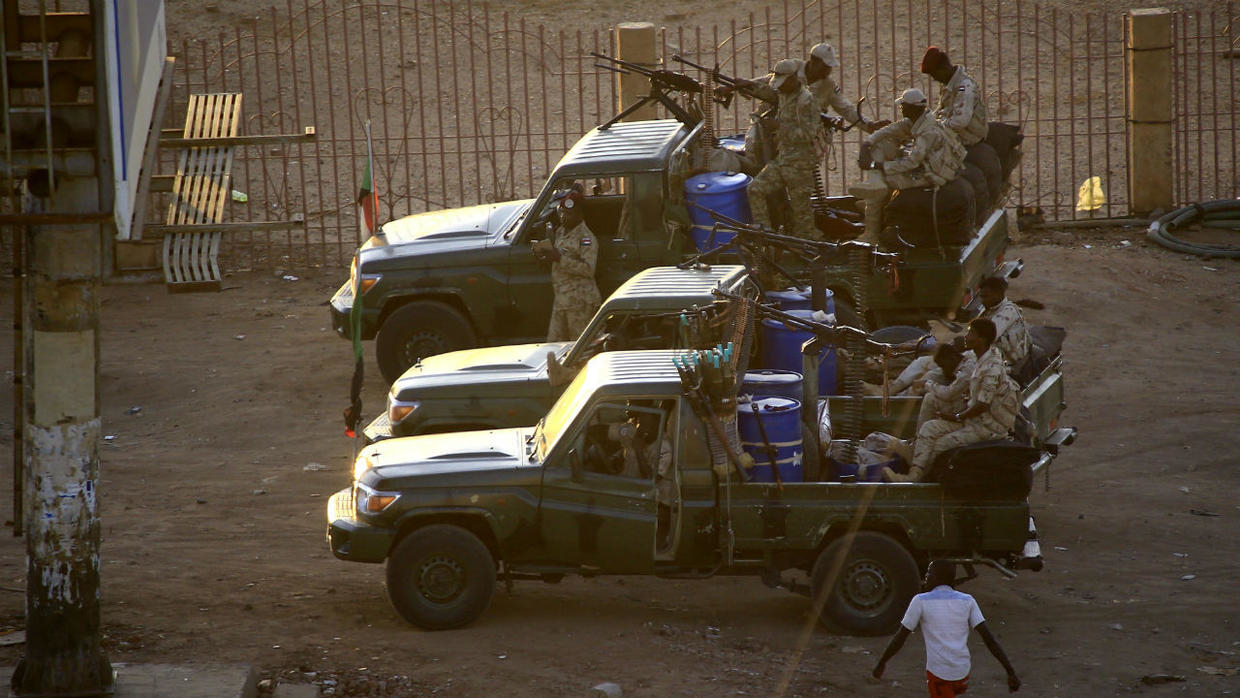 A deadly revolt Tuesday by Sudanese security forces protesting against their severance packages has underscored the importance of reforming and restructuring the country’s hydra-headed security services. But it’s a daunting task with ambitious armed men jostling for power.

When gunshots broke out in the Sudanese capital Tuesday, a local wag shot a little video clip of himself nonchalantly strutting through the Khartoum night. “I’m in the ghetto…ratatata!” he intoned with insouciance, repeating, as the heavy gunfire persisted, “RA-tatata! RA-tatata!”

The Khartoum version of the “I’m in the Ghetto” meme was promptly picked up and shared by social media users of Sudanese origin across the world. “When popular western memes meet volitile [sic] African states. #ILoveMyPeople” posted one Twitter user.

By Wednesday morning though, the generals were out, revealing the cause and fallout of the gunfire and it was clear it was no laughing matter.

“What happened on Tuesday was a revolt,” Mohamed Othman al-Hussein, Sudan’s army chief of staff, told reporters in the capital.

The shooting broke out at Khartoum bases of the Directorate of General Intelligence Service – formerly known as the National Intelligence and Security Service (NISS) – after some of its agents rejected a retirement plan proposed by the country’s new authorities.

Sudanese troops from the regular army and from the paramilitary, former Janjaweed Rapid Support Forces (RSF) then crushed the rebellion after storming these bases amid heavy gunfire. Two soldiers and three civilians who happened to be in the area were killed in the fighting.

Hours later, the head of the country’s ruling transitional council, Gen. Abdel-Fattah Burhan, announced that “life has returned to normal” and warned that “anyone who tries to disturb the security and stability of citizens will be defeated”.

Sudanese transitional Prime Minister Abdalla Hamdok described the mutiny as “discord” aimed at “cutting off the nation’s transition to building a solid democracy”.

But the breakout of fighting between two wings of Sudan’s vast, hydra-headed security services have raised fears of armed groups battling for power in the northeastern African nation, threatening a delicate democratic transition since the April 2019 ouster of Sudanese strongman Omar al-Bashir.

“This is the nightmare people predicted back in April,” noted Patrick Smith, editor of The Africa Report, in a phone interview with FRANCE 24. “There was a feeling back then that, ‘this is fantastic,’ the people have triumphed, the revolution has forced Bashir from power. But the fact is, Bashir was forced out of power by his own soldiers and there were fears over what was going to be the reactions of Sudan’s myriad security forces.”

‘Not just a bunch of spooks’

International attention through much of last year was rightly focused on the battle for control between civilians and the military in a country that sits at the crossroads of sub-Saharan Africa and the Middle East. Sudan experts however warned that reforming and restructuring the security services could pose a challenge, one that risked plunging the country into a fresh round of bloodshed.

Bashir, like many seasoned autocrats, oversaw a vast, entangled network of security services designed to prevent coups as well as surveil and crack down on any opposition.

His security-intelligence establishment included the Sudanese regular army, comprised of around 180,000 troops.

Meanwhile the paramilitary Rapid Support Forces (RSF) rose out of the Darfur conflict, when the dreaded Janjaweed militias indicted for war crimes by the International Criminal Court (ICC) were officially merged. The commander of the RSF, Mohamed Hamdan Dagalo –  widely known by his nickname “Hemedti” – is a widely reviled figure who and has been the focus of civilian ire since his troops conducted a brutal crackdown on the Khartoum protest camp in June 2019.

Sudan also has the Popular Defence Forces (PDF), an umbrella term for a range of militias and paramilitaries, as well as border security and policing services.

But there’s also a more sinister security services branch, and its troop and arsenal sizes have never been publicly disclosed.

The National Intelligence and Security Service (NISS) is described as Sudan’s intelligence agency, but it was always much more than that. “The NISS is the epitome of the Deep State, it’s the belly of the beast,” explained Smith. “This intelligence service is a military in itself. They had massive amounts of money under Bashir and they possess heavy weapons including helicopter gunships and armored cars. It’s not just a bunch of spooks who happen to be good shots, they have military hardware.”

Under its powerful former chief, Salah Gosh, the NISS played a major military role during the Sudan-Chad border hostilities that erupted due to the Darfur conflict as well as in coordinating militias in the troubled western province. Although Gosh grew threateningly powerful and was sidelined by Bashir around 2011, the NISS itself stayed loyal to the Islamist strongman.

In a 2019 academic report, seasoned Sudan expert Alex de Waal noted that the NISS is “thoroughly interpenetrated with the NCP” – referring to Bashir’s Muslim Brotherhood-linked National Congress Party – and “has its own commercial operations and external links (to many different Middle Eastern states) and thus parallel sources of finance”.

An Islamist who was instrumental in helping al Qaeda set up branches in Sudan in the 1990s, Gosh was quick to realise his glory days were over when Bashir was ousted from power. Two days after the country’s regular armed forces removed the Sudanese strongman from power on April 11, 2019, Gosh resigned his post and has not been seen in public since. He is believed to have fled to Egypt although Cairo has never confirmed these reports.

Months later, the country’s ruling Transitional Military Council (TMC) announced that the NISS would now be called the Directorate of General Intelligence Service. But few Sudanese put much store in a terminology revamp and the old NISS name has stuck.

The sudden public disappearance of the once omnipotent spy chief has sparked rumours and reports of Salah’s whereabouts, continued behind-the-scenes flexing of power and bids to bring back Sudan’s old guard. But none of them have been confirmed.

The ‘nub’ of transitional issues

The intrigue around Gosh peaked again on Tuesday, when NISS agents voiced their discontent over their retirement plans with volleys of gunshots and seized two oil fields in southern Sudan.

Dagalo (a.k.a. Hemedti) – whose RSF troops crushed Tuesday’s rebellion – was quick to blame the former spy chief for the latest disturbances.

“This is a coordinated plan by Salah Gosh,” Dagalo told reporters during a visit to neighbouring South Sudan. “The person behind this shooting today is Salah Gosh. He has many generals active within the security sector with an aim to create confusion and fighting.”

But many Sudanese put little credence on Dagalo’s word. The ambitious provincial former Janjaweed commander who gained immense power and wealth by fighting wars for whoever would pay him – including Saudi Arabia and the UAE – is widely distrusted in Sudan.

Analysts were quick to note that the statement by the Sudanese regular army that the latest rebellion had been quelled made no mention of Gosh. Local reporters meanwhile noted that Hemedti appeared to be training his sights on Gosh’s successor, the new NISS chief, Gen. Abu-Bakr Mustafa, also known as “Dambalab”.

Seems like Hemediti is laying the ground work to remove Dambalab (current head of Intelligence) & other high ranking Intelligence officials. Dambalab is an ally of Gosh. OTOH Hemediti is seeking to be the ultimate power in the “armed forces.” #Sudan

Seems like Hemediti is laying the ground work to remove Dambalab (current head of Intelligence) & other high ranking Intelligence officials. Dambalab is an ally of Gosh. OTOH Hemediti is seeking to be the ultimate power in the “armed forces.” #Sudan

But hours later, Mustafa handed in his resignation as spy chief. His quitting however did little to quell fears of a counter-revolution by Bashir’s supporters.

The revolving door of senior uniformed men moving around the power board game with their armed fighters has underscored the importance of a Disarmament, Demobilization and Reintegration (DDR) process for Sudan to avoid the fate of its northern neighbour, Libya.

“This crisis gets to the nub of the transitional issues in Sudan: to what extent can the regular military begin to get purchase of the security services,” explained Smith. “The tragedy of Sudan now is the lack of focus on this critical issue.”