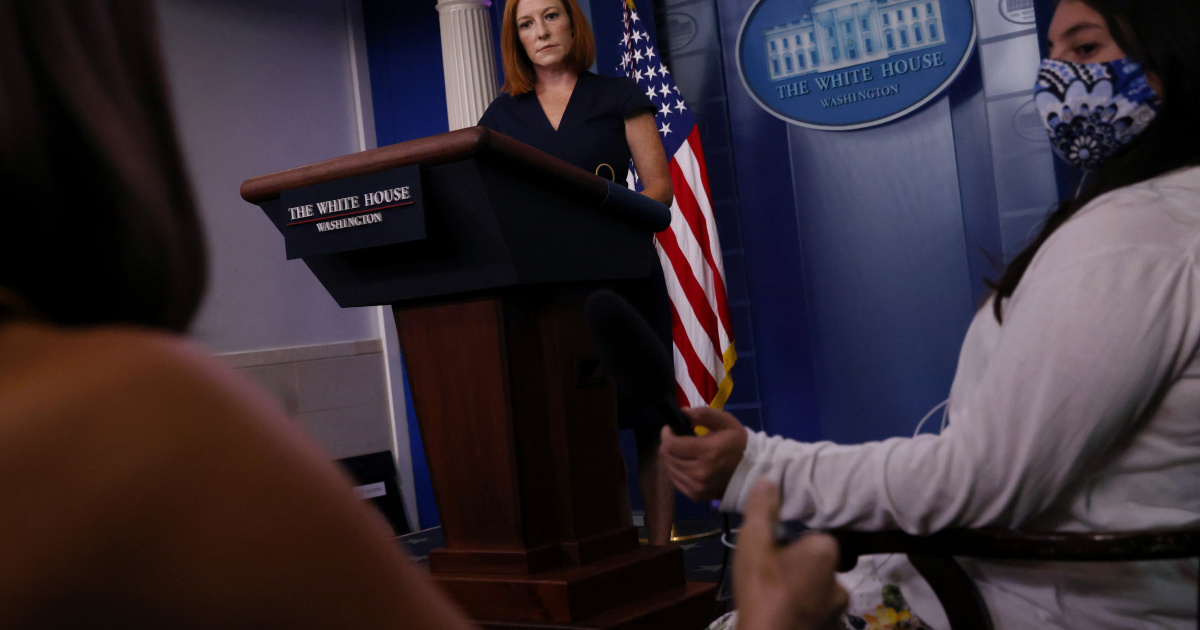 After a G7 meeting with Washington’s top international allies, the White House remains non-committal on extending the withdrawal deadline from Afghanistan.

President Joe Biden was set to deliver a speech at noon local time in Washington (16:00 GMT) announcing – according to several US media outlets – that American troops would leave Kabul by August 31.

The speech was delayed several times. And hours later, the White House released a statement saying that the evacuation of American citizens, third-country nationals and Afghan allies was “on pace to finish” by the end of the month.

Still, the statement by White House press secretary Jen Psaki left the possibility for extending the withdrawal deadline open. She said the operation will “end based on the achievement of our objectives”.

“In addition, the president has asked the Pentagon and the State Department for contingency plans to adjust the timeline should that become necessary,” she said.

Psaki later told reporters that coordination with the Taliban, the threat from ISIS-K and the contingency plan that Biden requested are “key caveats” in the decision about the withdrawal deadline.

Washington’s European allies had urged Biden to extend the deadline to allow more time for the evacuation operation, but the Taliban warned of “consequences” if US forces remain in the country past August 31.

“We are concerned about the deadline set by the United States on August 31. Additional time is needed to complete ongoing operations,” French Foreign Minister Jean-Yves Le Drian said on Monday.

At a news conference on Tuesday, Taliban spokesman Zabihullah Mujahid had ruled out extending the deadline, saying that the US and its partners have the resources to evacuate their citizens by the end of August.

As for Afghan allies of Washington, he said the group is “not in favour of allowing Afghans to leave”, especially those with special skills, including doctors and engineers.

“This country needs their expertise. They should not be taken to other countries,” Mujahid said.

Key US lawmakers, including members of Biden’s own Democratic Party, have called for extending the deadline as well.

Congressman Adam Schiff, a Democrat who chairs the House Intelligence Committee, said on Monday that it was “unlikely” to evacuate all US citizens and allies from Afghanistan by August 31.

“I’m certainly of the view that we maintain a military presence as long as it’s necessary to get all US persons out and to meet our moral and ethical obligation to our Afghan partners,” Schiff told reporters in Washington on Monday.

A bipartisan group of 25 legislators who have served in the US military sent a letter to Biden calling for keeping the troops at the airport for as long as necessary.

“This is about more than doing the right thing,” the letter said. “This is a national security imperative. The eyes of the world are watching whether we will stand by our friends.”

The Taliban took over Afghanistan in a blitz this month, capturing the capital Kabul on August 15 with government forces collapsing and President Ashraf Ghani fleeing the country.

Thousands of US troops remain in control of the Hamid Karzai International Airport to oversee the evacuation of Americans and Afghan civilians who worked with the US.

Despite scenes of chaos at the airport, the Biden administration has defended its actions in Kabul.

On Monday, US National Security Adviser Jake Sullivan, said the airlifts in Kabul were one of the largest in history, describing the operation as a “massive military, diplomatic, security, humanitarian undertaking”.

Sullivan also said Biden, not the Taliban, will make the final decision on when US troops will leave Afghanistan.

Administration officials have said that Washington is in regular contact with the Taliban to facilitate the evacuations, but stress that the Afghan group must respect human rights, including the rights of women, to gain international recognition.

As reports that Biden would stick by the August 31 deadline emerged, his critics were quick to denounce the decision.

“The world just witnessed the President of the United States take orders from a band of barbaric terrorists while ignoring the pleas of our international allies and American citizens he will leave behind,” Crenshaw wrote on Twitter, referring to the Taliban.

Prior to his public speech on Tuesday, Biden addressed the leaders of Canada, France, Germany, Italy, Japan and the United Kingdom, as well as NATO’s Secretary-General Jens Stoltenberg and UN chief Antonio Guterres as part of a G7 meeting tackling the situation in Afghanistan.

European Council President Charles Michel, who attended the meeting, said the EU stressed to its US partners “the need to secure the airport as long as necessary to complete the operations”.

“We call on the new Afghan authorities to allow free passage to all foreign and Afghan citizens who wish to get to the airport,” Michel said in a news conference after the G7 session.

We must also prepare ground for wider #G7 engagement & coordinated international action in support of Afghan people and prevent resurgence of terrorism pic.twitter.com/xLbnD6MHKA

UK Prime Minister Boris Johnson said the G7 will use its political and economic leverage to pressure the Taliban to ensure safe passage to the airport for those wishing to leave.

“The conditions we’re setting as G7 is that they’ve got to guarantee – right the way through August the 31st and beyond – a safe passage for those who want to come out,” Johnson said.

Earlier in the day, Pentagon spokesman John Kirby said the US is “aiming for the end of the month” as a departure date from Afghanistan.

“The Taliban have been very clear about what their expectations are,” said Kirby.

As the US withdraws and the Taliban tightens its grip on the country, humanitarian groups are warning of a dire crisis in Afghanistan.

“There’s a perfect storm coming because of several years of drought, conflict, economic deterioration, compounded by COVID,” David Beasley, director of the World Food Programme, told the Reuters news agency on Tuesday. “The number of people marching towards starvation has spiked to now 14 million.”

The United Nations rights chief, Michelle Bachelet, said her office is receiving reports of “serious violations” of international humanitarian law in areas under Taliban control, including summary executions of civilians and abuses against women.

“There are grave fears for women, for journalists and for the new generation of civil society leaders who have emerged in the past years,” Bachelet said at an emergency meeting of the UN Human Rights Council on Tuesday.

“Afghanistan’s diverse ethnic and religious minorities are also at risk of violence and repression, given previous patterns of serious violations under Taliban rule and reports of killings and targeted attacks in recent months.”