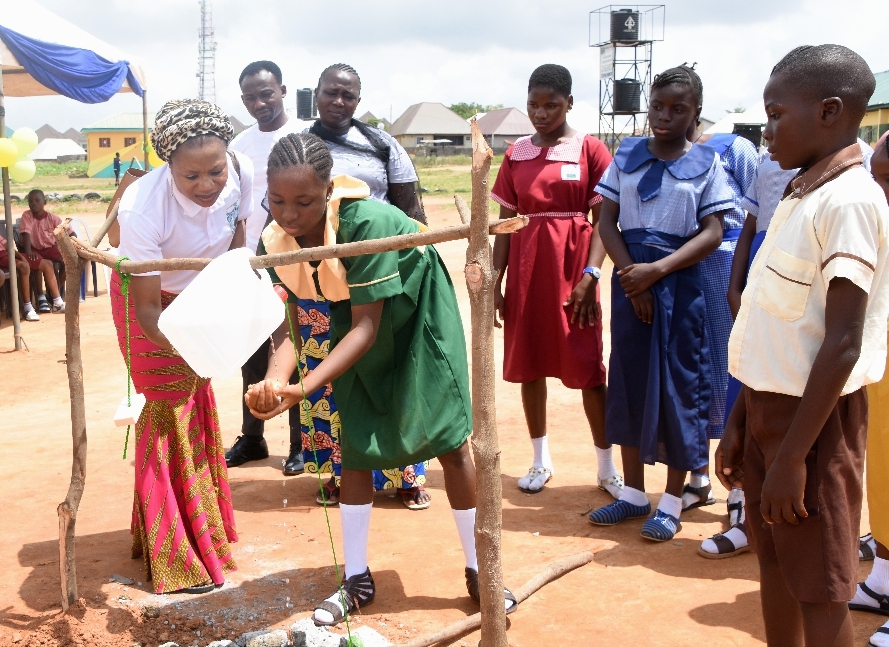 Mrs Nguzo Ogbodo, the President of the NGO, made this known during sensitisation programme organised by the organisation for seven primary schools along Airport Road Abuja on Tuesday

Ogbodo, at the inauguration of the projects, said the organisation also renovated one of the community’s boreholes in Aleita to commemorate the day.

“Because one of my focus areas is hand washing, it will make no sense to teach about hand washing and not making provision for hand washing station that could be used for it.

“I built the library and need to renovate it, it is a standard library, we also rehabilitated the community bore hole because one of the things the community is lacking is water.

“The bore hole is there but the water was not flowing and we have to work on it to make it functional to serve the community,” she said

Ogbodo said the Global Hand Wash Day was marked on Oct. 15 annually, adding that this year’s theme “Clean Hands for All”, was very apt because of the importance of hand washing to human health.

“It is an annual global advocacy day dedicated to increasing awareness and understanding about the importance of hand washing with soap as an easy and affordable way to prevent diseases and save lives.”

Ogbodo, while teaching the pupils the various steps of hand washing with soap and water, urged them to wash before eating and after the use of toilet.

She also called on government to invest more in the health and education needs of the population.

“The government needs to do more in building library, toilet, free food for the students because if children are hungry they cannot learn.

“And, to other stakeholders and well meaning Nigerians, they should also come out and do something for the community schools, there is nothing that is small, we can do more no matter how small.

“To the parents, they should take care of their children and feed them well and also maintain hygiene for them,” she said.

The Education Secretary, Local Education Authority (LEA) AMAC, Alhaji Haruna Karshi, lauded the NGO for the initiative which he said would go a long way to enhance the health of the students.

According to the secretary, the efforts of the initiator is commendable and should be emulated by all well meaning Nigerians as government alone cannot solve the problem of its citizens.

“Today is a global hand washing day, it is high time that people in Nigeria should learn to support government in development of the country

“People should come out and do something meaningful to support the schools and communities in which they live,” he said.

The Head Teacher Aleita Primary School, Mrs Florence Adebayo, commended the HDI CEO for remembering the school and embarking on some projects especially the renovation of toilet, library and bore hole for the community.

“My advice to the government is that they should try as such as possible in the public schools to provide toilet, bore hole and health facilities of the schools,” she said.

A parent, Mr Jonathan Mazawaji also commended the Hope and Dream initiative for coming to the help of the schools and community especially in renovating the borehole.

Mazawaji called on other Nigerians to emulate Ogbodo who has done a lot for the schools and the community in the last few years.

Favour said he would in turn enlighten his parents and other children on the importance of hand washing and healthy living. (NAN)