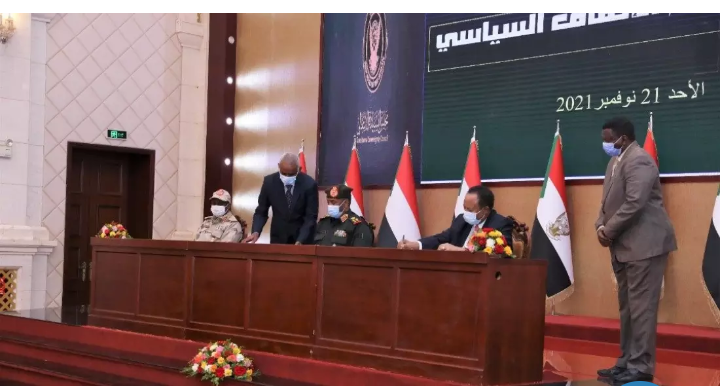 The Sudanese military, who ousted prime minister Abdulla Hamdok in late October, agreed on Sunday (21 November 2021) to reinstate Hamdok back as prime minister. This came after a new power-sharing agreement was signed with coup leader Lt. Gen. Abdel Fattah al-Burhan while protests and civil unrest continued in the streets. Sudan has been under a state of emergency since 25 October.

In a televised ceremony, prime minister Abdalla Hamdok appeared alongside Lt. Gen. Abdel Fattah al-Burhan and signed a 14-point agreement which they both hailed as an important step forward.

The civilian coalition, Forces for Freedom and Change, who supported Hamdok two years ago after the ousting of Omar al-Bashir did not acknowledge any new deal. Hamdok was quoted saying he had agreed to the deal to stop the violence: “Sudanese blood is precious, let us stop the bloodshed and direct the youth’s energy into building and development.”

The deal also allows for the release of political prisoners but does not make clear whether Hamdok will be able to exercise his full powers as prime minister. A source close to the negotiations says that Hamdok will be allowed to form his own government.

Much of the pressure came not only from the streets where protests demanded an end to the coup but also from the international community. The World Bank froze its aid to Sudan and the African Union (AU) suspended the country’s membership in the bloc. Some of the alleged military supporters from the region, Saudi Arabia and the UAE in particular, also joined the call for the restoration of the civilian-led government and return to power-sharing.

However, the army claimed that it had intervened to prevent a civil war that was threatening to erupt because political groups had been inciting civilians against the security forces.

Sudan’s Sovereign Council, the 11-member collective head of state since August 2019, will meet later Sunday before formally announcing the deal.