Sudan: Security forces use lethal force on protesters, at least 16 killed in the crackdown 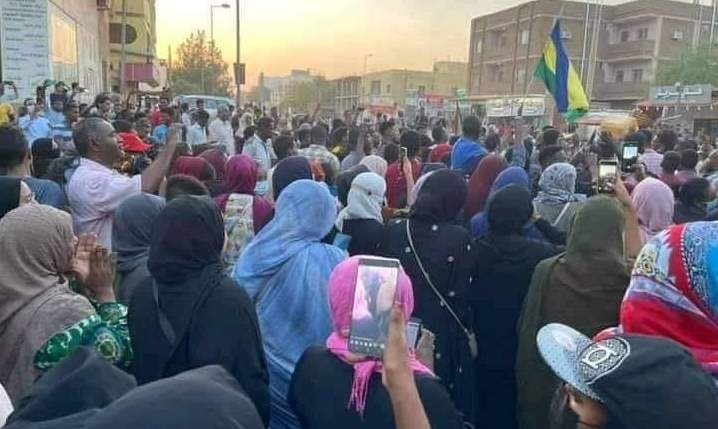 November 23, 2021 – Security forces have repeatedly used excessive force, including lethal force, against demonstrators in and around Khartoum, Human Rights said today. Sixteen people were shot dead on November 17, 2021, alone, including a woman and a child, the deadliest response to date. Protesters again took to the streets on November 21, despite the announcement that the prime minister, Abdalla Hamdok, had been released and had signed a deal with the military.

“The ruthless killing of 16 people on November 17, many shot in the head, shows clearly that Sudan’s security forces had no intention of exercising restraint, but are bent on silencing Sudanese voices,” said Laetitia Bader, Horn of Africa director at Human Rights Watch. “Sudan’s backers should not, in the name of political expediency, let these crimes go unanswered nor those responsible get away with them.”

The November 21 deal with Hamdok reinstates him as prime minister and allows him to form a technocratic government. The deal also calls for the release of “political detainees,” and national investigations into abuses. The deal was immediately rejected by protesters and the Freedom and Change Forces (FFC), the political alliance that once represented the civilian component in the transitional government, which was overthrown.

Since the October 25 military coup, groups have organized multiple large-scale demonstrations during which security forces have repeatedly used lethal force. While the prime minister was signing the deal with the military leadership, security forces used teargas, rubber bullets, and live ammunition to disperse protesters outside. Human Rights Watch spoke to 10 protesters and 3 doctors, and reviewed 7 video clips posted online. The Sudanese Archive, an independent rights organization that archives, verifies, and investigates open-source documentation in Sudan, verified the videos.

According to doctors’ groups, 41 people have been killed since the protests began, including 5 children and a woman. The military has deployed joint forces including Sudan Armed Forces (SAF), Rapid Support Forces (RSF), regular police, riot police, and Central Reserve Police (CRP), a militarized police unit, at protests in Khartoum and its outskirts.

According to forensic reports seen by Human Rights Watch, 6 of 12 people on whom autopsies were carried out after November 17 had been shot in the head, one in the neck, and five in the chest. Medical reports said that 107 were wounded, including 48 reportedly due to live ammunitions.

On November 18 the police denied that their forces had used live ammunition. Human Rights Watch examined reports filed by families of the killed at police stations for eight protesters killed on November 17, citing live ammunition injuries as the cause of death. Lt. General al-Burhan, the military chief, denied in a televised interview on November 7 that the army was involved in previous killings. However, evidence obtained by Human Rights Watch, including witness accounts, forensic reports, and video footage, point to the use of live ammunition by security forces in SAF, RSF, CRP, and regular police uniforms.

Bahri, a town within Khartoum, had the highest toll, with at least 11 killed and over 77 injured on November 17. A 31-year-old protester said that protesters gathered around noon along Bahri’s main street near al-Mo’assa intersection where police units were already stationed.

He said the police suddenly fired teargas canisters without warning: “Some protesters started throwing rocks at the police, but we asked them to stop. Then the situation changed. Around 1:30 to 2 p.m. the police opened fire. Again, without warning. We thought they were shooting in the air until I started feeling bullets flying

flying at my body level. I saw one protester hit and fall bleeding.”

Three witnesses said they saw members of both regular and anti-riot police, as well CRP, directing their guns at the protesters, some kneeling or taking a shooting position before opening fire.

A 41-year-old journalist at the same location reported seeing police forces use teargas at first, including firing canisters directly at protesters. Mid-afternoon, he saw police and CRP shooting live ammunition and saw three protesters killed: “they [police[ directed their guns at us. They did not shoot to scare off only – they wanted to kill us.”

Two witnesses near al-Sha’abia area in Bahri said the use of live ammunition intensified between 3 and 4 p.m. as some protesters remained on the streets. “There was more deployment of Central Reserve Police at that time,” one said. “I even saw one of them carrying a big machine gun and shooting at protesters. It felt like a war zone. I saw two protesters near me hit and bleeding a lot.”

Four said that police repeatedly fired teargas canisters at protesters without warning: “Sometimes they use teargas as a weapon. At some points, we were maybe 10 meters away from them, and I saw police officers directing their teargas guns at us. I saw two hit: one in the head and one in the shoulder.”

According to doctors’ groups, 13 were transferred to hospitals with wounds from direct hits from teargas canisters.

A 30-year-old protester said security forces also used live ammunition: “I saw one protester hit in his head. I carried him with others to a raksha [rickshaw] nearby. He was already not breathing, and he died later in the hospital.” According to a report a medical source provided to Human Rights Watch, three were killed that day and two others on later days; 175 were injured on October 30 and treated in hospitals in the capital, 11 had gunshots in the upper parts of their bodies, 36 were injured by teargas canisters.

One doctor said anti-riot police stationed themselves outside the East Nile hospital, then raided the hospital: “they] police forces [said they saw some people inside the hospital taking pictures of them. They arrested one doctor for a short period and searched other medical staff’s mobiles looking for videos and pictures before leaving. They made us feel unsafe doing our work.”

Abusive security force operations in health care facilities and harassment of providers was also documented during the 2018-2019 protests, and following the dispersal of the sit-in on June 3, 2019.

Human Rights Watch has also documented internet and telephone communications slowdowns and shutdowns since the protests began, hampering reporting and restricting people’s access to vital information at this critical time, especially outside of the capital. On November 17, local telecommunication services were also cut for most of that day. Internet services were restored on November 18, activists said.

Only four detainees have been released despite commitments in the November 21 deal to release more.

Dozens of protesters arrested in the last month by the security forces are still detained, with some transferred to a prison in Khartoum, reportedly waiting to appear before emergency tribunals.

While the use of teargas for crowd control when a protest has turned violent is permissible, forces should only use teargas when necessary to prevent further physical harm; where possible, they should issue warnings before firing. The deliberate use of lethal force is permissible only when it is strictly necessary to protect life, Human Rights Watch said. Even if some protesters sought to repel the forces by throwing rocks at them, use of live ammunition would not be justified.

Human Rights Watch had found that a handful of killings of protesters were investigated and prosecuted prior to the coup, but impunity for serious crimes has remained largely the norm. Obstacles such as lack of cooperation from security forces in lifting immunity for suspects or providing access to evidence continued to challenge existing efforts, said prosecutors, victims’ families, and lawyers.

Sudan should cooperate with the new expert on Sudan designated by the UN High Commissioner for Human Rights and UN Joint Human Rights Office in Sudan, to allow for credible investigations into events of the last month. Sudan’s international and regional partners should continue to call for an end to abuses against protesters and perceived dissent and press for the release of all persons detained in connection to their free and peaceful exercise of their rights.

“With so many Sudanese reeling from the ruthless clampdown of the last month, this is not the time for a return to business as usual,” Bader said. “Sudan’s partners, regional and further afield, should meaningfully support and help the Sudanese achieve their aspirations to build a fairer, rights-respecting country.”