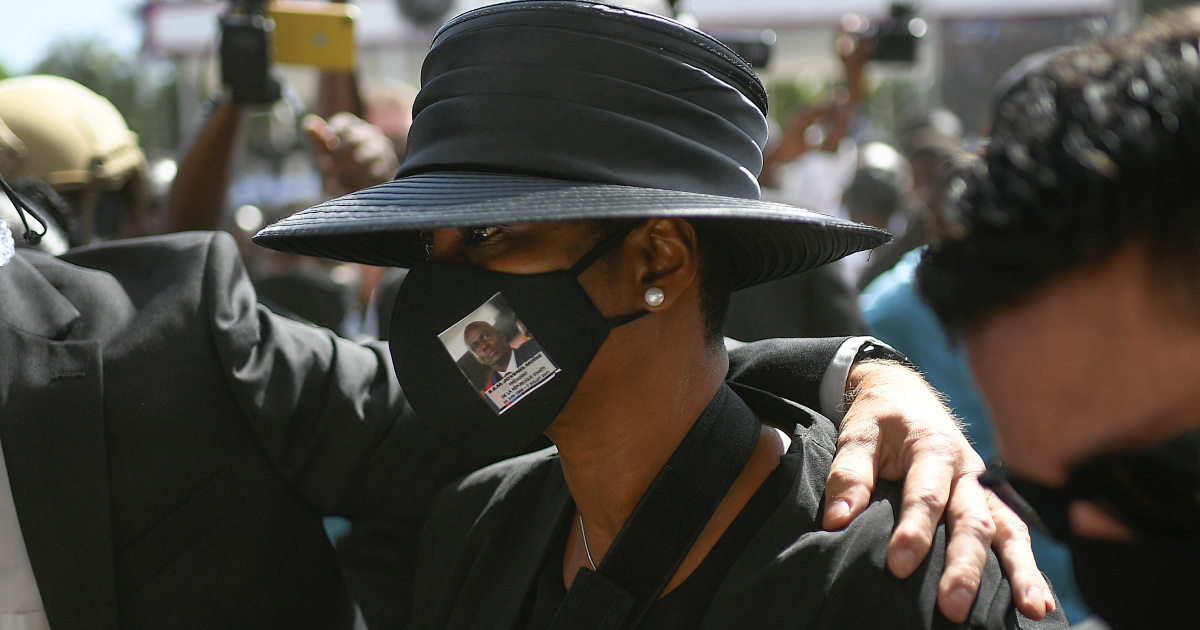 The body of slain Haitian President Jovenel Moise was returned to his hometown Friday for a private funeral amid heavy security following violent protests and fears of political volatility in the Caribbean nation.

His wife, Martine Moise, arrived at her husband’s service in Cap-Haitien to cries of “Justice! Justice!” as she headed straight to his casket, climbing the stairs and stopping in front of it. Her right arm in a sling from wounds she suffered during the assassination, she lay her left arm on the casket and then brought it to her heart as she stood there in silence. Her eyes filled with tears as her three children joined her.

Minutes later, a group of supporters grabbed a large portrait of Moise and paraded with it as the police band began to play the national anthem over loud wails.

As the ceremony began, hundreds of protesters clashed with police outside the private residence. Shots erupted and tear gas and black smoke wafted into the ceremony. Protesters’ cries carried over religious leaders speaking at the funeral.

United States Ambassador to the UN Linda Thomas-Greenfield, who led the US presidential delegation to Moise’s funeral, tweeted “We urge everyone to express themselves peacefully and refrain from violence.” The US delegation is safe and returning home slightly earlier than expected, the Reuters news agency reports.

The Haitian people deserve democracy, stability, security, and prosperity, and we stand with them in this time of crisis. We urge everyone to express themselves peacefully and refrain from violence.

Earlier, cries of “Assassin!” filled the air at the arrival of Haiti’s National Police Chief Leon Charles. Haitians clad in sombre suits, shiny shoes and black and white formal dresses shouted and pointed fingers at the neighbouring seating platforms where Haitian officials and foreign dignitaries sat above at least a dozen men with high-powered weapons.

White t-shirts and caps emblazoned with his picture were distributed to supporters for the final ceremony to honour Moise, who was shot several times on July 7 during an attack at his private home that seriously injured his wife, Martine.

Moise’s body arrived shortly after dawn at his family’s seaside property where the funeral is being held. Six officials carried the brown casket up a stage where they saluted it and stood before it in silence for several minutes before draping a large red and blue Haitian flag over it.

Before the funeral began, a man wrapped himself in a large Haitian flag and approached the casket, crying out, “We need to fight and get justice for Jovenel!” Next to him, a man carrying a t-shirt commemorating Moise joined in as he yelled, “Jovenel died big! He died for me and for the rest of the country… We’re not going to back down.”

The funeral comes days after Henry, with support from key international diplomats, was installed in Haiti – a move that appeared aimed at averting a leadership struggle following Moise’s assassination.

Henry, who was designated prime minister by Moise before he was slain, but never sworn in, replaced interim prime minister Claude Joseph, and has promised to form a provisional consensus government until elections are held.

Set on land held by Moise’s family and where he lived as a boy, the partly built tomb stood in the shade of fruit trees, just a few steps from a mausoleum for Moise’s father, who died last year. Police controlled access to the compound through a single gate.

Authorities have said that at least 26 suspects have been arrested in the killing, including 18 former Colombian soldiers. Police are still looking for several more suspects they say were involved in the assassination plot, including a former rebel leader and an ex-senator.

The attack’s plotters disguised the mercenaries as US Drug Enforcement Administration (DEA) agents, a ruse that helped them enter Moise’s home with no resistance from his security detail, authorities have said. At least one of the arrested men, a Haitian-American, had previously worked as an informant for the DEA.