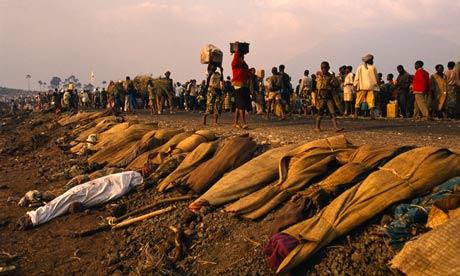 Remains of 141 victims of 1994 Rwandan genocide against Tutsi have so far been exhumed from mass graves at Rubavu airstrip in the western part of the country, a local official said.

The official said the bodies were exhumed since the search started on Monday.

The search started after casual labourers at the airstrip, who were digging water channels dug out human remains on Saturday, Pacifique Ishimwe, Rubavu District Vice Mayor said on Thursday.

“With the help of excavators, we have so far exhumed remains of about 141 people from mass graves but the search continues,” she said.

On the first day of the search, remains of 28 victims, including that of women were exhumed from two separate mass graves adjacent to Rubavu airstrip and district stadium.

She said the women were buried with babies strapped on their backs.

She appealed to the public to come forward with information which could help in identifying the names of the victims who were buried in the mass graves.

Genocide survivors said in late April 1994 during the genocide, several Rwandans of Tutsi ethnic group were led to the stadium called Umuganda, where they were killed.

Remains of genocide victims are still being discovered in different parts of Rwanda two decades after the wanton massacres.

Rwanda’s National Commission for the fight against Genocide (CNLG), said in 2009 that government was considering use of ground penetrating radar to locate mass graves for remains of the genocide victims in order to give them a befitting burial.

About one million people, mainly Tutsi and moderate Hutus, were killed in the 1994 genocide against Tutsi which lasted 100 days. (Xinhua/NAN)