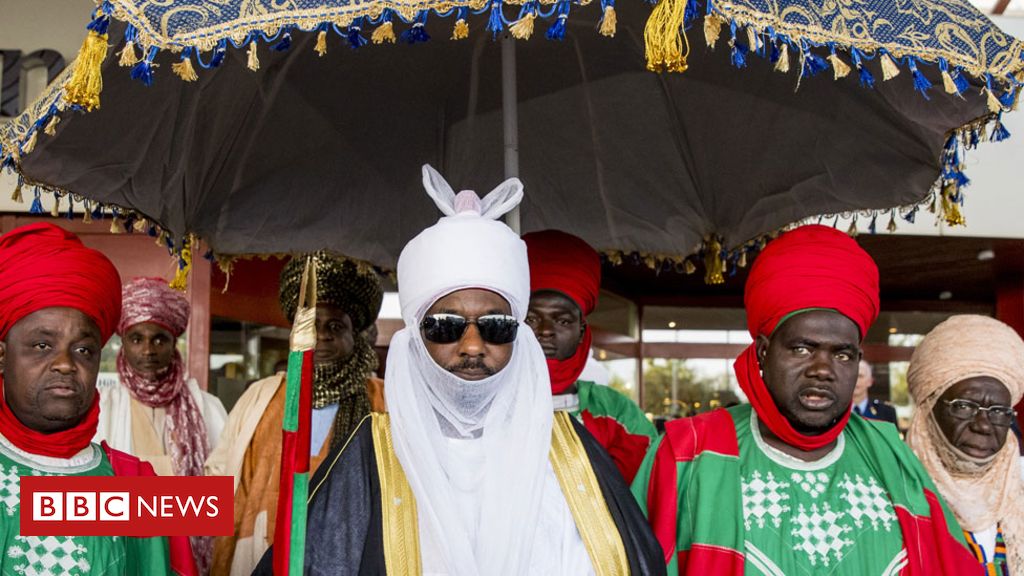 One of Nigeria’s most influential Muslim and traditional leaders, the Emir of Kano, says he accepts his dethronement as the “will of God”.

He was escorted out of the palace by security officers, and replaced by his predecessor’s son, Aminu Ado Bayero.

In his first comments since he was deposed, Mr Sanusi called for calm and for people to “embrace” the new emir.

“God in His infinite Wisdom had willed that I will become an emir of Kano so I was enthroned on the 8th of June 2014. I spent almost six years on the throne. But today God has also willed I will leave the throne. I have taken it in good faith,” he said in a video message.

“We are calling on people to be calm. “We urge our families and children to embrace the new emir. They should protect the heritage of this house,” he added.

It is unclear where security officers took Mr Sanusi, but by tradition he will be expected to live in exile outside the emirate for the rest of his life.

He was Nigeria’s central bank chief before he became the Emir of Kano in the mainly Muslim north.

State government officials said Mr Sanusi was removed “in order to safeguard the sanctity, culture, tradition, religion and prestige of the Kano emirate”, accusing the emir of “total disrespect” of institutions and the governor’s office.

But many say his sacking was politically motivated because of a protracted dispute with the governor of Kano Abdullahi Umar Ganduje.

After falling out with him in 2017, Mr Sanusi did not attend state functions and official meetings, which the state government said amounted to “total insubordination”.

The emir’s refusal to appear before a panel investigating allegations of corruption against him also did not go down well with the government.

He is accused of selling property and mismanaging funds but he secured a court order stopping the probe.

The father of his successor Aminu Ado Bayero was the Emir of Kano for more than half a century until his death in 2014.

Mr Sanusi was seen as a reformist and had been critical of some government policies – a stance that frequently put him at loggerheads with ruling politicians.

Chad trials of pro-democracy activists due to start