My elevation to SAN humbling, call to service – Umar 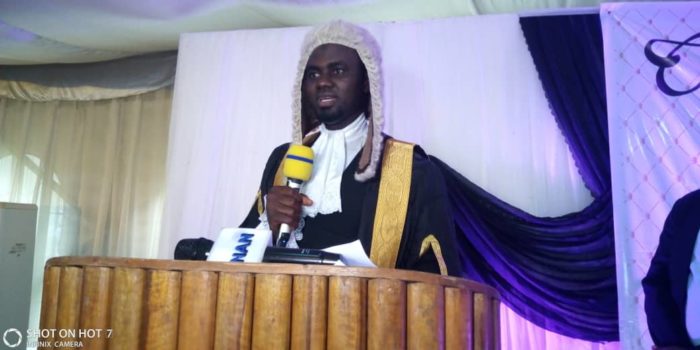 Barr. Alhassan Akeje Umar on Thursday, described his elevation to a Senior Advocate of Nigeria (SAN) as a humbling call to service.

Umar who is a solicitor for the Independent National Electoral Commission (INEC) spoke at an event organized by family and friends to celebrate his conferment of the highest recognition in the legal profession.

The solicitor, who had been in the legal practice for over 10 decades, traversing through the hierarchies of the courts up to the Supreme Court, was full of gratitude to God for the honour.

“When I received a letter dated July 8, 2019 communicating my elevation to the rank of Senior Advocate of Nigeria (SAN), it was both satisfying and humbling.

“It was satisfying because of the devotion I have over the years accorded my legal profession and career formation.

“This devotion was now resulting in my being conferred with the highest possible recognition in the legal profession.

“It is at the same time humbling as my attention particularly falls on the eminent persons conferred with the rank of SAN in the past and those with whom I stood this morning,” he said.

Umar who recalled how he gave up a much contested slot in the family business to pursue education, thanked his parents and siblings for the upbringing, support and encouragement all through the years.

The University of Jos graduate expressed gratitude to the INEC Chairman, Mahmood Yakubu, his senior colleagues and bosses, past and present for the grooming and other colleagues at INEC.

He pledged to meet the new expectation that will be demanded of him with his elevation as SAN, stressing that God will be his helper.

Meanwhile, the Kogi State Governor, Yahaya Bello in a congratulatory message said that the conferment on Umar and three others from the state was an honour to the state.

Bello who was represented by his Chief of Staff Edward Onoja commended all four recipients of the honour.

“Today Kogi is blessed with four of its indigenes that have been conferred as SAN.

“His Excellency’s goodwill message is to all of them, congratulations to them as they have been brought to a privileged league of elites.

“There are less than 550 SANs in Nigeria and that he has made it into that league is evidently based on hardwork, commitment, character and most importantly trust and faith in God.

“Gov. Bello joins him today to celebrate this great feat and wishes that his judicial work after today would be at a higher level and the world will tap from his wealth of experience,” he said.

For the Director Legal Services and Litigation, INEC, Tanimu Inuwa SAN, he said that Alhassan’s humility, uprightness, patriotism and dedication to his work made him to always excel in everything he does.

“His hard work earned him recognition by his employer INEC last year and now being recognized by the Chief Justice of the federation with the conferment of the highest rank in the legal profession.

He prayed God to grant the celebrator long life to stamp his name positively in his chosen profession.