KZN schools: Sadtu concerned over damages that may impact learning 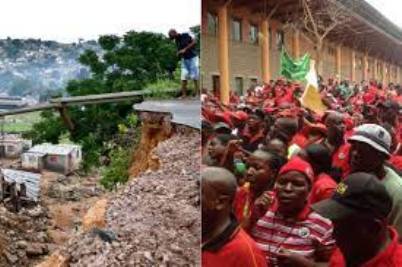 Sadtu has expressed concerns over the damages that schools across KZN have faced due tot he torrential rains and floods.

A number of schools opened for learning on Tuesday, 19 April. The South African Democratic Teacher’s Union (Sadtu) has expressed concern over the state of a few schools that reopened in KwaZulu-Natal (KZN).

A NUMBER OF SCHOOLS HAVE BEEN DAMAGED AND NEED REPAIRS
Approximately 600 institutions faced damage from the torrential rains and floods in KZN. 443 people were reported to have lost their lives due to the disaster. Sadtu’s KZN secretary Nomarashiya Caluza shared that a number of students do not even have uniforms to attend school.

Caluza said that there are around 124 educational facilities that need major repairs. Sadtu is also concerned about learners having nothing to wear and missing out on schoolwork.

“The extent of the damage is not the same. There are about 124 (schools) that will need major repairs or will have to be restarted. But we are worried because as we go back to school, some of our learners do not have school uniforms. They have nothing to wear. Some of them won’t even be able to go to school,”

Nomarashiya Caluza , SADTU KZN secretary
EDUCATION DEPARTMENT WILL BE ASSESSING THE DAMAGE
The Department of Basic Education said that learning institutions that have been severely damaged will be opened on Tuesday for assessments. Elijah Mhlanga, the department’s spokesperson, stated that learning and teaching in facilities that are inaccessible are unlikely to continue.

Mhlanga shared that schools are being opened for principals and officials to assess the damage and note what needs to be done. Other schools are opening teaching and learning. Mhlanga explained that the 102 schools, which are inaccessible, are unlikely to open for learning.

On Tuesday, Department of Basic Education Minister Angie Motshekga is among government officials who will be visiting KZN. The officials are intending to inspect and assess the damage caused by the floods in the province.

Government officials including Minister Angie Motshekga will be visiting KZN to assess the damages caused by floods. Photo: toruto1234 / Flickr
KZN FLOODS: ONLINE LEARNING MAY BE RE-INTRODUCED AT SOME INSTITUTIONS
Spokesperson for the KwaZulu-Natal (KZN) Education Department Muzi Mahlambi stated that 248 schools have been damaged by the floods. Mahlambi shared that the department has not been able to assess the exact damage.

He said that they are currently relying on information gained from principals of schools that were impacted by the KZN floods. Mahlambi explained that the extent of damage varies from classrooms and admin blocks being flooded to offices being filled with water.

The spokesperson said that due to collapsed roads and mudslides, proper assessments could not be done. He continued by explaining that assessments will begin on Tuesday, 19 April, when schools re-open. Mahlambi shared that a circular had been issued where parents were asked to keep kids at home.

‘Thousands’ of Toyotas to be scrapped due to KZN flood damage