Kenya bus attack: ‘My passengers are like my brothers and sisters’ 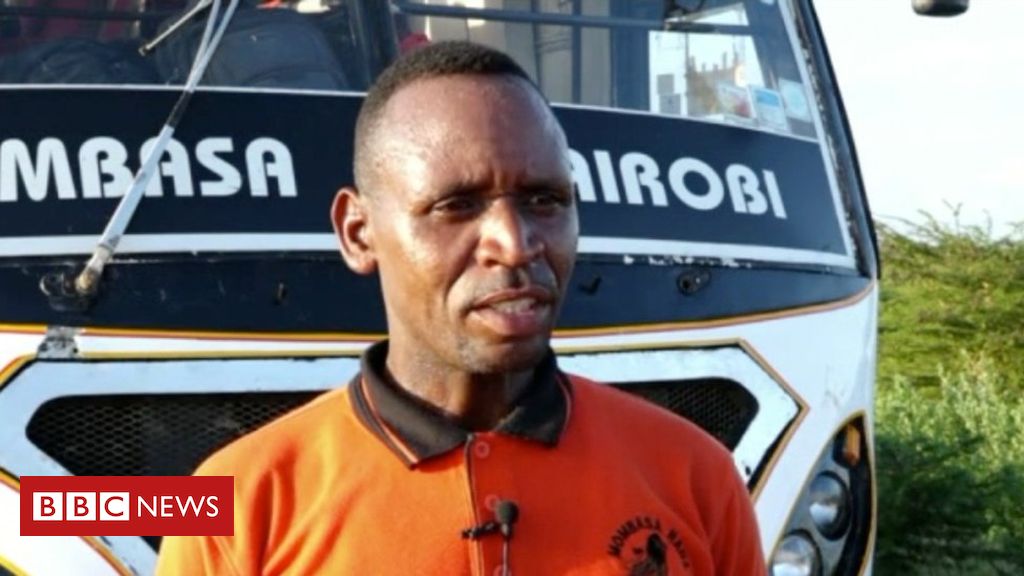 “I am not a hero,” said softly spoken Raymond Juma.

The bus driver was speaking after his actions saved his 47 passengers from a militant attack in the east of Kenya.

“My passengers are like my mothers, my brothers and sisters.

“I just did what anyone else would have done to save myself and those I love,” he told the BBC.

Mr Juma was driving one of the two buses, owned by the Mombasa Raha company, which were attacked by heavily armed men on 2 January on the road between the coastal towns of Mombasa and Lamu.

He said the men, who were wearing military fatigue jackets, appeared without warning from behind a minivan that was parked at the side of the road and fired in the air, ordering him to stop.

“It was like a scene from a horror movie,” he said. But he drove on.

“When I didn’t stop, they fired directly at the bus. I knew if I stopped, that would be the end of me and my passengers.

“People were screaming and crying when the shots were fired. From my rear-view mirror, I saw some duck on the floor of the bus as I sped off.”

‘Scariest moment of my life’

The bullets grazed the side of the bus and punctured the front tyres, which meant it finally ground to a halt 100m (330 ft) up the road.

“When I stopped… people started jumping out of the bus windows trying to get to safety. People were just running everywhere, including into the forest.”

The 46-year-old father of four said he did not stop running for an hour before he was spotted by the driver of another bus, who gave him a lift.

“This was the scariest moment of my entire life,” he said, his voice still shaking.

“It’s just by the grace of God, as we are lucky the bus didn’t roll over and we are all alive.”

But the driver of the second bus, Aboubakar Hemed, was not so lucky.

‘My conductor was killed’

Unaware of what had happened ahead of him, he complied with the gunmen when he was ordered to stop, thinking they were security officers.

All 41 passengers were asked to get off.

“They asked passengers to recite the Muslim Shahada [declaration of faith]. Those who couldn’t were shot,” Mr Hemed told the BBC.

He said that he was so afraid that he trembled as he recited the Shahada himself.

Three men in the bus were killed by the militants, believed to be members of the Somalia-based al-Shabab group. Several others were injured in the attack and are recovering in hospital.

“How do you ever get over something like this?” Mr Hemed asked.

“My conductor was killed by the attackers. It’s traumatic. I can’t explain it.”

He said people were trembling and crying as they alighted from the bus while the gunmen waited for them. Some got out and immediately ran for their lives while they were being shot at, but luckily none was hit as they escaped.

“As a driver, you keep hearing these stories of al-Shabab attacks on this road but nothing can ever prepare you for something like this,” says Mr Hemed, who has been plying the route for more than five years.

Al-Shabab has not said it was behind last week’s bus attack, but the jihadist group has carried out similar attacks on this road over the last few years.

Kenya has troops in Somalia as part of the African Union force supporting the UN-backed government in its fight against al-Shabab.

The militant group has lost territory but has carried out guerrilla attacks across the border, including an assault on a Kenya-US military base on 5 January in which three Americans died.

Overall, hundreds of civilians have been killed or injured during the raids.

Since 2015, in an effort to combat the militants, the security force have been conducting an operation in the Boni Forest, believed to be a hideout and training ground for al-Shabab fighters.

The unrest has severely affected the region.

For several years, teachers, and also nurses, who aren’t from the area have refused to be deployed there, meaning some schools are struggling to function.

Schools were due to reopen this week after the holidays but once again, many were deserted.

Dozens of families have left their farmlands, saying they are too afraid to work in the fields.

One Chinese company working at the planned Lamu Port has announced it will be temporarily shutting down and sending home nearly 2,000 casual workers because of security concerns.

Lamu is a popular tourist destination but Western holidaymakers are shying away from the picturesque island.

As for the drivers, Mr Juma says he wants to continue working but will be scared if security doesn’t improve.

Astonishingly, he was back at work the following day – driving another bus along the same route, under heavy military guard.

He said that as he approached the scene of the attack, he felt a chill down his spine.

Mr Hemed also had to work the next day. He said he was seriously thinking about quitting for the sake of his family and children.