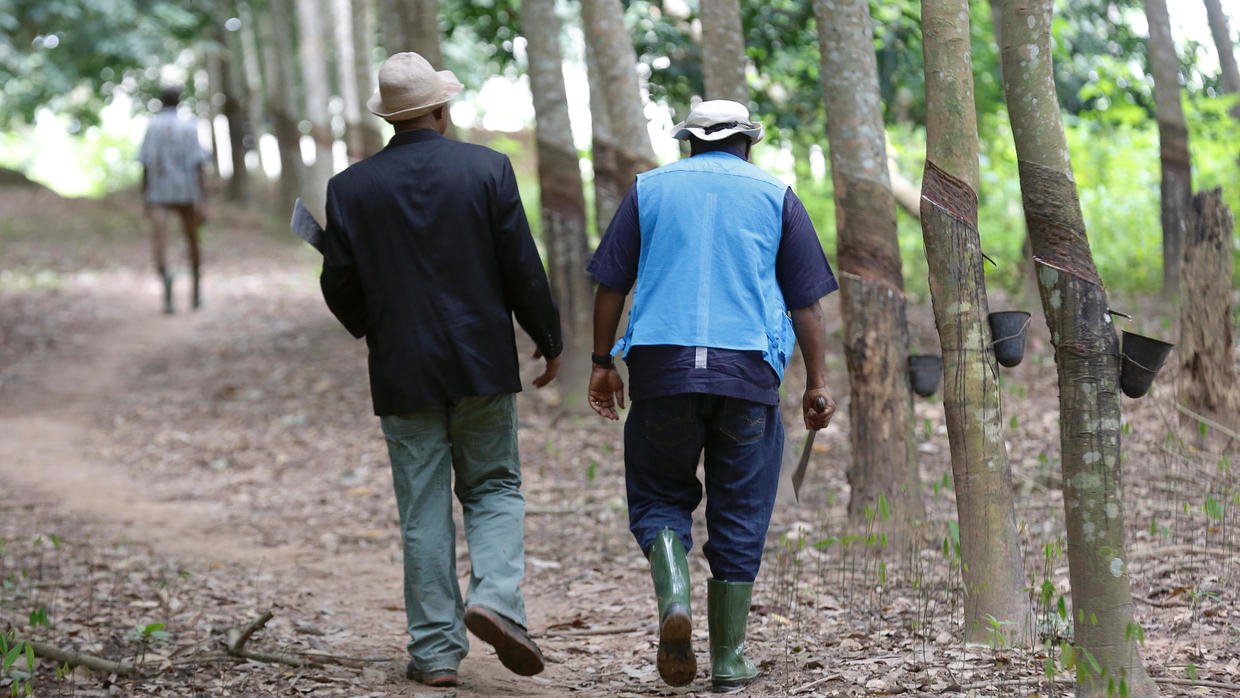 As the coronavirus takes hold, the demand for rubber gloves is on the up. Yet despite being the largest rubber producer in Africa, the Ivory Coast is failing to make the most of it.

With the number of Covid-19 infections surpassing one million, the demand for rubber gloves is soaring. As governments across the world scramble to stockpile medical supplies, the World Health Organization warned on March 27 that a “chronic global shortage of personal protective gear” was “one of the most urgent threats to our collective ability to save lives”.

“We are at a loss because of the cancelling of contracts and the closing of factories in Europe and Asia,” said Apromac president Eugène Kremien.

Kremien told FRANCE 24 that if the coronavirus crisis lasts for more than three months, the sector would face “catastrophe”. He added that at least one million Ivorians depend on rubber for their income, when the 160,000 producers, their employees and their families are accounted for.

Ivorians are failing to exploit the current crisis for financial gain for one key reason. Most rubber glove manufacturing takes place in South East Asia. The Malaysian Rubber Glove Manufacturers Association alone makes 60 percent of all rubber gloves globally, with a single company, Top Glove, holding a quarter of the world market share. The key ingredient is raw latex – the milky-coloured liquid collected through the process of ‘bleeding’ trees.

It would take days for Ivorian producers to transport the latex to these factories in Malaysia by boat. And in that length of time, the latex liquid would have begun to congeal and, as such, become unsuitable for glove manufacturing.

This transportation issue is the main reason that rubber exports from the Ivory Coast come in a solid, granulated form. In 2019, around 80 percent of the country’s rubber exports went to the automobile industry, for tyres. But Kremien says that tyre manufacturers Michelin, Goodyear and Bridgestone are among the companies to stop importing, because of the coronavirus crisis.

The Ivory Coast is one of the fastest expanding economies in the world, with a growth rate averaging 8.5 percent annually from 2011-19. Rubber production is one of many sectors to be infected by Covid-19.

On March 31, the Prime Minister, Amadou Gon Coulibaly, revised the country’s GDP growth forecast from 7.2 to 3.6 percent for 2020 – the lowest rate in nine years.

In a televised address, the PM said that this prediction only holds if the crisis ends in June. Given that the first case of coronavirus was not detected until March 11, hopes of reaching a ‘peak’ before that point seem unlikely.

The Ivorian government has proposed a stimulus package of €2.6bn – about 5 percent of the country’s GDP. Businesses, many of which have been forcibly closed, will receive tax breaks. While the agricultural sector, dominated by cocoa, but also including cashew nut and, of course, rubber production, will receive subsidies.

‘Europe must understand we are partners’

The Ivory Coast does not currently have the facilities to manufacture rubber gloves on its own. For Kremien, the answer is obvious.

“We need to be able to produce gloves here,” he said, adding, “I am not blaming the government, but they need to invest in factories.

“Europe too must understand that we are partners. The distance from the Ivory Coast to Europe is much shorter than Asia to Europe – and we have the raw materials. The coronavirus has highlighted the dysfunctional relationship between Europe and Africa.”