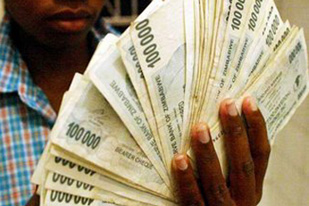 Harare, Zimbabwe – In early 2019, Zimbabwe’s central bank announced plans to bring back the Zimbabwe dollar as legal tender after a decade of using the US dollar and seven other international currencies because raging hyperinflation had run the local currency aground.

The country’s economists warned against the move.

“The fundamentals are definitely not right to sustain any new currency,” Victor Bhoroma, an independent Harare-based economist told the press at the time.

Zimbabwe’s surrogate currency, the bond note, had been touted as being of equivalent value to the US dollar in 2016. But by 2019, it had tanked and was trading at a 400 percent discount to the greenback.

Despite all the warnings, central bank chief John Mangudya was not dissuaded.

Now, the Southern African country is once again in the grip of a severe economic crisis characterised by a massive shortage of foreign currency, unemployment of more than 90 percent, low production and hyperinflation that has reduced purchasing power.

Barely three years after the reintroduction of the Zimbabwe dollar, its value has plunged dramatically. From trading at around 210 Zimbabwean dollars to $1 at the beginning of March, it is now trading at 400 to $1 and black market dealers are selling it for $450.

The effects of the COVID pandemic and the ongoing Russia-Ukraine war are battering the economy.

A combination of the $18.5bn public debt, a sustained average fiscal deficit of $2.3bn in the last three fiscal years, high inflation and other factors meant the odds were always stacked against the new currency.

Now history could be repeating itself as the country may be forced to either get rid of its currency or adopt the US dollar again – a term known as dollarisation.

“I instituted legal proceedings (against the central bank in 2016) because it was very clear that Treasury and RBZ would print money and take the country back to 2008/2009 hyperinflation,” prominent businessman and investor Fred Mtanda, who held stakes in Zimbabwe’s Volkswagen dealership and Western Union franchise, told Al Jazeera.

In 2016, Mtanda had moved to legally compel the central bank to prove the existence of an African Export-Import Bank bond that it claimed backed the value of the bond note. The case was dismissed but, six years on, the businessman says his fears have been confirmed.

“We are here because Treasury and Reserve Bank of Zimbabwe (RBZ) paid the government of Zimbabwe capital expenditure,” Mtanda said. “RBZ and treasury drive the exchange rate to where it is. Black market players act for RBZ and Treasury.”

Economists agree. Gift Mugano, visiting professor of economics at the University of Zimbabwe Business School, says the major driver of the exchange rate’s collapse was “excessive printing of money” and a lack of fiscal discipline.

“In the last two years, the government has never spent within its means,” Mugano told Al Jazeera.

By the third quarter of the last fiscal year, the government had exceeded the budget by 71 percent, Mugano said. Money released by the treasury since March has found its way to the black market, precipitating the devaluation of the already struggling local unit, Mugano adds.

“Dollarisation is like death,” Mugano told Al Jazeera, adding that it may still be inevitable. “You collapse and die. That is where the currency is going. Our government has continued to take in lots of poison into this economy and printing money and being stubborn and putting more into construction and agriculture and failed to take advice.”

On top of that, because of its dysfunctional official auction system, which is accused of overvaluing the local dollar, Zimbabwe has one of the most vibrant foreign currency black markets in Southern Africa.

But President Emmerson Mnangagwa’s administration will probably not take kindly to the dollarisation.

Mnangagwa, who took over in a November 2017 military coup from Zimbabwe’s founding leader Robert Mugabe, has resisted a return to the US dollar.

That reluctance could be because the central bank fears it could “lose control of monetary policy” under dollarisation, Vince Museve, a Harare-based independent economist, told Al Jazeera.

But the troubled Zimbabwe dollar had already been rejected by the public in 2009, the height of hyperinflation, and now distrust in the currency is high again.

Like Mugano, Museve believes Zimbabwe may have to dollarise again, regardless of its impact.

“If we don’t do that, we are going to have a serious problem,” Museve said. But it is “a dilemma with no clear cut solutions in terms of the way forward” for companies without dollar revenues, he added.

“The US dollar [is] now seen as a currency to preserve value,” Rashweat Mukundu, a Harare-based political scientist told Al Jazeera. “Anyone with excess Zimbabwe dollars looks for US dollars [to buy],” he said.

As the country heads for elections next year, the political situation seems set to impact the status quo.

“The long-term issue is how do you build confidence in the Zimbabwe dollar. It means getting the politics right and addressing risk perception. You need to create a stable economic and political environment,” Museve added. “Those things do not exist currently.”

Judging by developments on the ground, dollarisation may indeed be the lesser evil. Inflation that surpassed 800 percent in 2020 before coming down to 60 percent in January this year has since started going up. April inflation shot up to 96.4.

The rising number is pushed by a jump in prices of basic goods. For instance, two litres (half a gallon) of cooking oil now sells for $4.50 from $3.80 in March. A packet of two kilogrammes (about four pounds) of sugar is now selling at $2.50 from the March price of $1.90.

Citizens have long been groaning about the situation and now manufacturers are joining too.

Last week, a position paper on the currency crisis by the Confederation of Zimbabwe Industries, a group representing manufacturers in the country, leaked in the local media.

“Getting the price of foreign currency right is a fundamental matter of Zimbabwe’s economic development interest,” it read.

“An overvalued Zimbabwe dollar broadly undermines the scope for maximising structural efficiency and the growth of both the export industry and import substitution. We are at a point where what to do is just as important as what should not be done.”