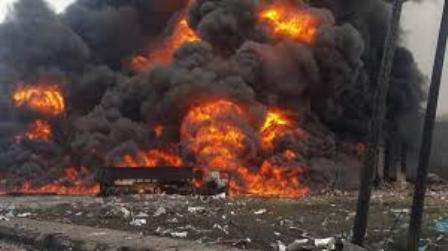 President Muhammadu Buhari has commiserated with families who lost loved ones, and all those affected by explosion in Abule Ado, Amuwo Odofin Local Government Area of Lagos State, on Sunday.

In a statement by his Senior Special Assistant on Media and Publicity, Malam Garba Shehu in Abuja on Sunday, the President condoled with the Lagos State government and all residents affected by the unfortunate incident.

News Agency of Nigeria (NAN) reports that the National Emergency Management Agency (NEMA) had on Sunday confirmed that 15 corpses, including a family of four, were recovered from the scene of Sunday’s explosion which occurred at Abule Ado,  Trade Fair axis of Lagos State.

No fewer than 60 students of Bethlehem Girls College located within the area who sustained various degrees of injuries in the incident were also taken to the Nigerian Navy Hospital in Ojo Cantonment.

Mr Ibrahim Farinloye, Acting  Coordinator of NEMA in Lagos, told NAN that the couple and their two sons were caught by the explosion on their way to church around about 9a.m. on Sunday.

Farinloye said over 50 buildings, including Bethlehem Girls College and a popular hotel, were damaged in the explosion.

He said: “The resulting fire later spread to the Nigerian National Petroleum Corporation (NNPC) oil pipeline passing through the area even though the pipeline has been shutdown as a precautionary measure.

“The fire was eventually extinguished about 3.30p.m. through the combined efforts of officials of the Lagos State Fire Service,  Federal Fire Service and Nigerian Navy Fire Tender.”

President Buhari said: “I have received with sadness the news of this unfortunate incident which caused loss of lives and property.

“A misfortune of whatever scale anywhere is a tragedy to the country, and while the NNPC makes efforts to determine the cause of the incident, I send my deepest and profound sympathises to the victims, their families, government and people of Lagos State.” (NAN)