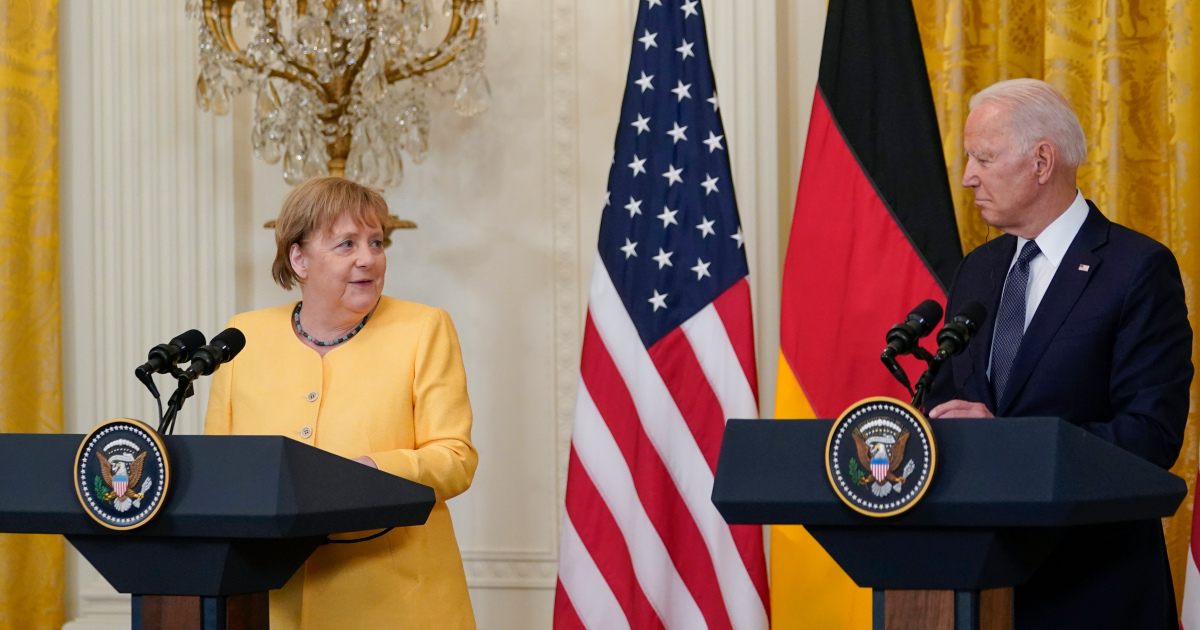 United States President Joe Biden and German Chancellor Angela Merkel have pledged a unified front against “Russian aggression” from Moscow, while remaining at odds over the Russia-to-Germany Nord Stream 2 pipeline, in what is likely the outgoing German leader’s final visit to the White House as a head of state.

Biden and Merkel were quick to strike a familiar tone during the German leader’s first visit to Washington following four years of fraught relations under former President Donald Trump.

“On a personal note, I must tell you I will miss seeing you at our summits,” Biden said as he stood by Merkel, the second-longest serving chancellor in Germany’s history, during a late afternoon joint news conference on Wednesday. “I truly will.”

Merkel, in turn, repeatedly referred to Biden as “Dear Joe”.

“I value the friendship,” she told reporters while hailing the US and Germany as sharing the same values and “determination to tackle the challenges of our times”.

On Russia, Biden and Merkel were careful to stress unity on standing up to “aggression” as they navigated a longstanding disagreement over the nearly-completed Nord Stream 2 natural gas pipeline, which would deliver gas from the Arctic to Germany via the Baltic Sea, bypassing Ukraine and depriving it of valuable transit fees.

Washington has long opposed the $11bn project, arguing that it will threaten European energy security by increasing the continent’s reliance on Russian gas and allowing Moscow to exert political pressure on vulnerable Eastern and Central European nations.

Merkel, for her part, repeated Berlin’s stance that the pipeline is intended as an additional project, not a replacement for Ukraine as a gas transit route. She added that Russia could face EU sanctions if it violated its agreement to continue shipping gas supplies through Ukraine.

“Good friends can disagree,” said Biden, who, in a sign of detente, had decided against sanctioning the company behind the pipeline because the project was near completion, drawing ire from some members of Congress.

The visit comes amid a backdrop of looming uncertainty over how Germany and the US will navigate disagreements going forward.

Merkel, who has been chancellor since 2005, plans to exit Germany’s government after the national elections in September.

Polling shows her Christian Democrats are poised to take the lead in forming a government after the election but it remains unclear which parties would be included in a coalition.

Biden’s Democratic Party, meanwhile, has tenuous majorities in the US Senate and House of Representatives. Those could evaporate in the 2022 congressional elections.

During the White House visit, the leaders also walked a careful line on China, a policy area where Washington and Berlin have been at odds in recent times.

Berlin has wooed Chinese trade, while the Biden administration has framed combatting Chinese competition as its top foreign policy priority.

“There is a lot of common understanding that China, in many areas, is our competitor; that trade with China needs to rest on the assumption that we have a level playing field,” Merkel told reporters.

Both leaders said they would stand up for democratic principles and universal rights when they saw China or any other country working to undermine them.

“We are united, united in our commitment to addressing democratic backsliding, corruption, phony populism in the European Union or among candidates for the EU membership, or anywhere we find it in the world,” Biden said.