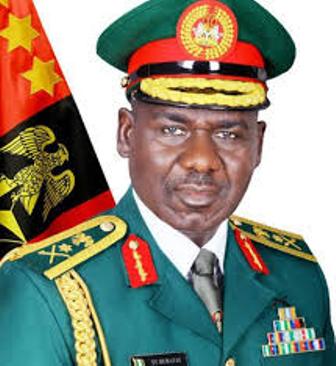 By Modupe Oremule
The Chief of Army Staff (COAS) Lt.- Gen. Tukur Buratai, has inaugurated two blocks of 39 flats at the Nigeria Army Cantonment in Ikeja, Col. Musa Sagir, the Acting Director, Army Public Relations, said this in a statement in Lagos.

Buratai, who was represented by the General Officer Commanding (GOC), 81 Division Maj.-Gen. Olubunmi Irefin, noted that the inauguration signified his commitment to the welfare of Army personnel and their families.

He demanded nothing less than the personnel’s unwavering commitment to duty and loyalty to constituted authority.

“It is heartwarming to note that the army has indeed deployed enormous resources to facilitate the expeditious completion of the project.

“This was with a view to ensuring that the erstwhile occupants who had to squat with colleagues to give room for the renovation return immediately to their newly renovated flats, thereby decongesting their temporary refuge in the spirit of the requirement for social distancing in the face of the ravaging COVID-19,” he said.

Congratulating the beneficiaries, the COAS urged them to ensure adequate maintenance of the facilities.

News Agency of Nigeria (NAN) reports that the inauguration was the third since the GOC assumed duty in July 2019.