Whitney Houston, Notorious B.I.G get nomination for Rock and Roll Hall of Fame 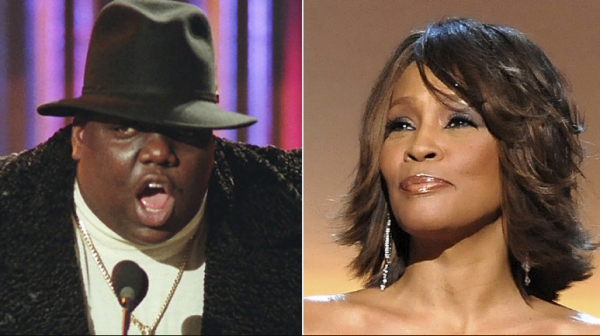 The Rock and  Roll Hall of Fame has announced late American international music legends, Whitney Houston and Notorious B.I.G  among its inductees for the 35th annual Hall of Fame ceremony, years after their death.

According to US Today, the Rock Hall announced Houston and the legendary rapper B.I.G among nine first-time nominees and 16 overall under consideration for induction for the 2020 edition holding in May in Cleveland, United States.

Their nominations honour artistes who both died young, as Houston was 48 when she drowned in a Beverly Hills hotel bathtub and B.I.G was just 24 when he was killed in a drive-by shooting.

The Rock and Roll Hall of Fame is a museum and hall of fame, established in 1983 and is located in downtown Cleveland, Ohio, on the shore of Lake Erie.

It documents the history of rock music and the artistes, producers, engineers, and other notable figures that have influenced its development.

To be eligible for nomination, an artiste or band must have released its first commercial recording at least 25 years before the year of nomination.

After the nominees are announced, ballots will be sent to more than 1,000 artistes, historians and members of the music industry, who will consider an act’s career work, influence on other artists, innovation and skill as they vote.

The 2020 inductees will be announced in January and the next ceremony will take place in Cleveland on Saturday May 2, 2020.

News Agency of Nigeria (NAN) reports that Whitney Houston, the daughter of gospel star Cissy Houston, was born into a musical family on Aug. 9, 1963, in Newark, New Jersey.

She was an international superstar singing diva, with her debut album, ‘Whitney Houston’, released in 1985 and became the biggest-selling album by a debut artist.

Her several hit singles include ‘Saving All My Love For You’, ‘How Will I Know’, ‘You Give Good Love’, and ‘The Greatest Love of All’

Houston was married to singer Bobby Brown with whom she had her only child Bobbi Kristina Brown, 22, who had also passed on July 26, 2015.

She was a Multi-Grammy Award winning singer, with an unequalled run of seven consecutive number one records (1980s), and held number one spot on Billboard’s Hot 100 for 14 weeks with “I Will Always Love You”.

In 2009, Guinness World Records cited her as the most awarded female act of all time.

NAN also reports that late rapper Notorious B.I.G, the only child of Jamaican immigrant parents, was born Christopher George Latore Wallace  on May 21, 1972 and raised in the Brooklyn  borough of New York City.

His debut album Ready to Die (1994) made him a central figure in East Coast hip hop and increased New York City’s visibility in the genre at a time when West Coast hip hop dominated the mainstream.

The Notorious B.I.G. was noted for his “loose, easy flow”,dark, semi-autobiographical lyrics and storytelling abilities, which focused on crime and hardship.

He was married to singer Faith Evans, and they had a son, before his murder by an unknown assailant in a drive-by shooting in Los Angeles on March 9, 1997.

His second album, “Life after Death”, released two weeks after his death, rose to number one on the U.S. album charts.

In 2000, the album became one of the few hip-hop albums to be certified Diamond.(NAN)