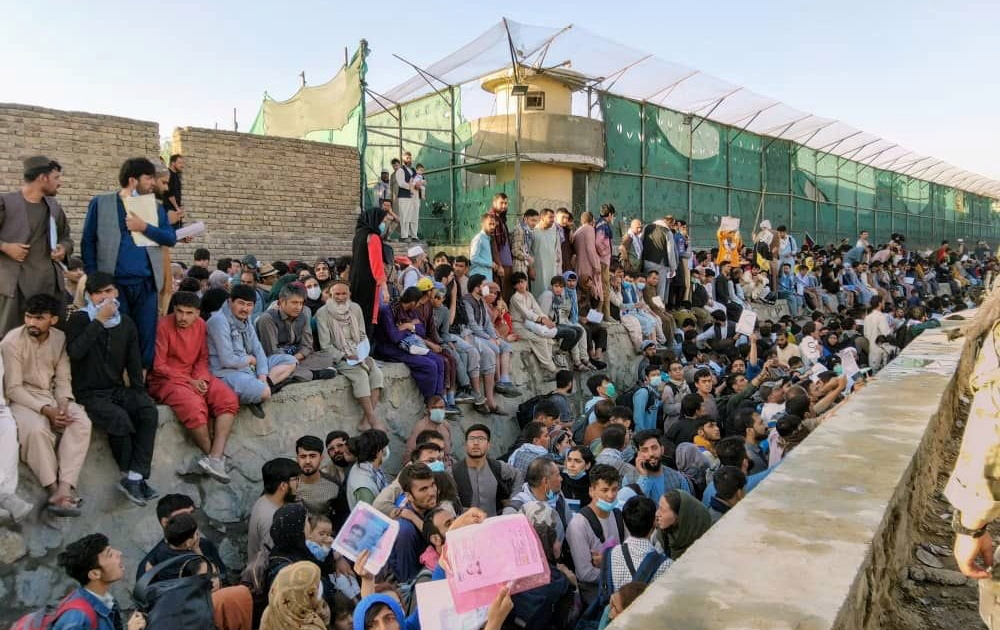 The United States, Australia and the United Kingdom have urged people to move away from the international airport in Kabul due to the threat of an attack by the ISIL-offshoot in Afghanistan, the Islamic State in the Khorasan Province (ISKP).

The warnings on Thursday came as Western troops hurried to evacuate as many of their citizens and vulnerable Afghans as possible before a withdrawal deadline on August 31.

The US Embassy in Kabul issued an alert advising US citizens to avoid travelling to the airport and said those already at the gates should leave immediately. It cited unspecified “security threats”.

The British Foreign Office issued a similar advisory, telling people in the area of the airport to “move away to a safe location”, adding, “There is an ongoing and high threat of terrorist attack.”

Australia’s Department of Foreign also urged Australians and Afghans with a visa for Australia to leave the area, warning of a “very high threat of a terrorist attack” at the airport.

Crowds of desperate people seeking to flee Taliban rule have tried to access the Kabul airport since the Taliban captured the Afghan capital on August 15. Since the Taliban seizure, the US and its allies have been flown more than 88,000 foreigners and Afghans out of the city’s airport in one of the biggest air evacuations in history.

According to the US military, planes are now taking off the equivalent of every 39 minutes.

“The countdown is on. The US and foreign forces only have until Tuesday to withdraw and their pullout means an end to evacuation flights,” said Al Jazeera’s Charlotte Bellis, reporting from the Kabul airport. “Now, outside the airport, there’s panic as people rush to see if they can get on some of these final flights,” she said.

“We understand the US and Taliban have a deal and the Taliban are only allowed to let people through here who have foreign passports, who have visas and who have paperwork that is verified.”

Those who are cleared to leave are put on designated buses and the rest are pushed back, she said.

“In the meantime, they are trying to control the crowds and keep people back and stop them from swamping the area so that these buses can come through. How they are doing that is by shooting guns in the air, by using water cannons and by beating people.”

‘Everyone is risking their life’

The Taliban have promised to provide security outside the airport but said foreign troops must be out by the end of the month. They have encouraged Afghans to stay while saying those with permission to leave will still be allowed to do so once commercial flights resume after the foreign troops go.

“It’s very easy for a suicide bomber to attack the corridors filled with people and warnings have been issued repeatedly,” Ahmedullah Rafiqzai, an Afghan official working at the Directorate of Civil Aviation at the Kabul airport, told the Reuters news agency.

“But people don’t want to move, it’s their determination to leave this country that they are not scared to even die, everyone is risking their life.”

The White House said US President Joe Biden was briefed about the threat from the ISKP group as well as contingency plans for the evacuation.

“ISIS-K is a sworn enemy of the Taliban, and they have a history of fighting one another,” Biden had said on Sunday, using a different name for the ISKP.

“But every day we have troops on the ground, these troops and innocent civilians at the airport face the risk of attack from ISIS-K.”

Outside the Kabul airport, a former Afghan soldier told Al Jazeera he did not have the proper documents but he still hoped to be evacuated to the US.

“I’m here without documents because a lot of people that went to the US on evacuation flights were civilians,” said Zyrah Gul. “So I thought if civilians are going and I served in the army, I should be eligible to go too.”

Meanwhile, Zakirah Ahmadi said she has not been able to enter the airport despite having a valid visa to Turkey. “I’ve been close to the gate three times, but because of gunshots and shouting, it makes everyone scared,” she said. “Since I’m a woman, I don’t have the courage to push past them. I’ll do my best to get out. Even if I get shot, I will continue trying to get inside the airport.”

Many in Afghanistan fear the Taliban may revert to its brutal brand of rule, which ended in 2001 and was marked by public executions and the curtailment of basic freedoms. Women were also barred from school or work.

US-backed forces deposed the Taliban in the weeks following the September 11, 2001, attacks on the US, planned from Afghan territory by al-Qaeda. But the group retook the country in a lighting-fast offensive earlier this month as the US-backed Afghan government collapsed in the wake of the US withdrawing its troops from the country.

While the Taliban have said they will respect human rights and not allow “terrorists” to operate from the country, Taliban spokesman Zabihullah Mujahid told broadcaster NBC News there was “no proof” that Osama Bin Laden, the late al-Qaeda chief, was involved in the 9/11 attacks on New York and Washington.

“There is no evidence even after 20 years of war, we have no proof he was involved … There was no justification for this war,” he said.