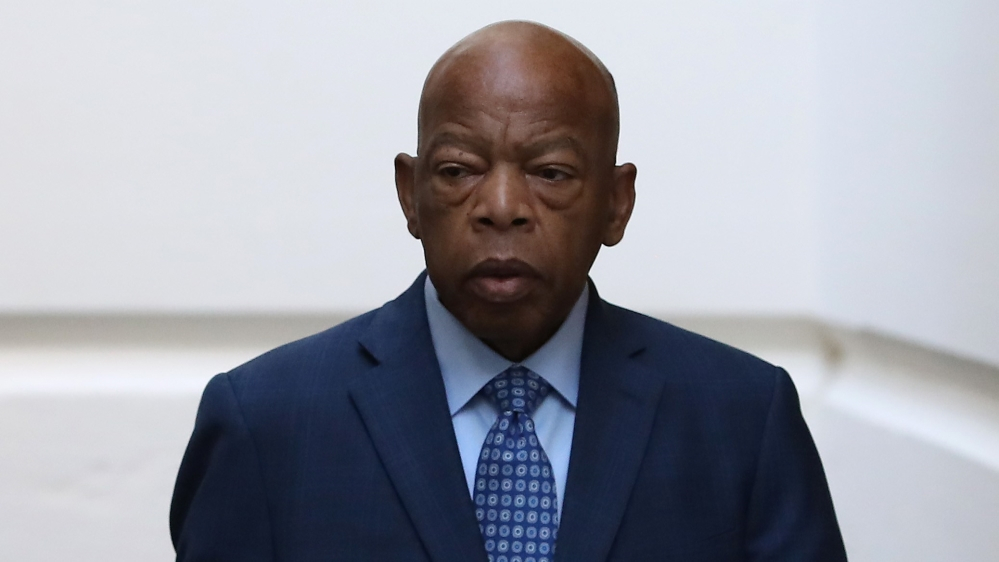 US President Joe Biden has renewed his call for Congress to pass legislation that would protect the right to vote in honour civil rights leader and longtime Congressman John Lewis, who died one year ago.

In a statement on Saturday, the one-year anniversary of Lewis’ death, Biden said it was critical to continue “the cause that John was willing to give his life for: protecting the sacred right to vote”.

“Not since the Civil Rights Movement of the 1950s and 1960s have we seen such unrelenting attacks on voting rights and the integrity of our elections,” said Biden, who pointed to his predecessor Donald Trump’s false claims the 2020 election was marred by widespread as one example.

He also slammed “new waves of voter suppression”, a reference to a slew of state legislation that aims to restrict access to voting and which critics say would disproportionately harm Black and other voters of colour.

Contentious laws are being debated in states like Texas and implemented by Republican lawmakers in other states, including Arizona, Florida and Georgia.

The Brennan Center for Justice at New York University, which tracks voter suppression laws across the US, says on its website that 17 states had enacted 28 new laws restricting access to voting as of June 21.

“I again call on Congress to pass the For the People Act and the John Lewis Voting Rights Advancement Act so I can sign them into law,” Biden said in his statement, referring to proposed legislation that would strengthen voting rights but has stalled in Congress.

Democrats are pushing for the For the People Act, a sweeping federal voting and elections bill, but Senate Republicans have united to block it, saying it infringes on states’ ability to conduct elections. Most Republicans have also dismissed the John Lewis Voting Rights Advancement Act, which would restore sections of the Voting Rights Act that were weakened by the Supreme Court.

Lewis, who served in Congress for decades, was a protege of Martin Luther King Jr and kept up the fight for civil rights and human rights until the end of his life.

He was perhaps best known for leading about 600 protesters in the Bloody Sunday march across the Edmund Pettus Bridge in Selma, Alabama, in 1965. State troopers beat Lewis and other activists who were marching for voting rights that day.

“Congressman Lewis fought tirelessly for our country’s highest ideals: freedom and justice for all, and for the right of every American to make their voice heard at the ballot box,” Harris said in her own statement on Saturday.

As a college student at American Baptist College and then Fisk University, Lewis also helped desegregate public spaces in Nashville and pushed for racial justice across the south.

Nashville marked the anniversary of his death with events on Friday and Saturday, renaming a large portion of Fifth Avenue to Rep. John Lewis Way.

Among establishments lining the street is the Woolworth downtown building, where Lewis and other Black civil rights leaders defiantly sat at the segregated lunch counter that would not serve them in 1960. Hundreds marched down the street before arriving at Ryman Auditorium for a celebration ceremony.

Meanwhile, senior US lawmakers and members of Lewis’ family gathered in San Diego on Saturday for the christening of a Navy ship named after Lewis.

“This ship will be a beacon to the world reminding all who see it of the persistence and courage of John Lewis,” Democratic House Speaker Nancy Pelosi said at the christening of the USNS John Lewis.

Lewis’ nephew, Marcus Tyner, said the family was grateful for the honour, but said “what would please my uncle most” is if Congress passed the voting rights bill named after him.