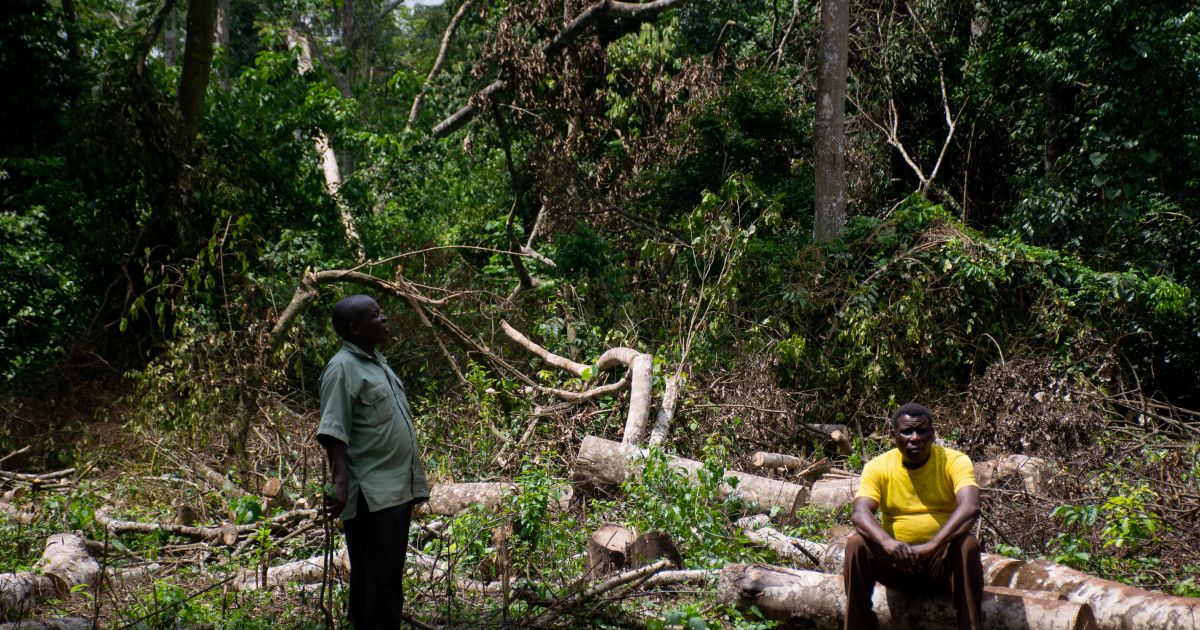 Since August 2020, when mechanical graders roared to life as part of a controversial sugarcane development project, residents and civil society groups under the Save Bugoma Forest campaign have been waging an uphill legal battle.

A short walk from a parked bulldozer, police officers and private guards stationed in proximity of the Nsozi village have been preventing access to parts of the forest. Locals who depend on wood for domestic energy and as a source of livelihood have little choice but to trespass, Anatole said. Since the clearing of the forest began, vexed chimpanzees and herds of fleeing wildlife have attacked villagers in surrounding areas and raided their crops.

“The problems began when the clearing of the forest started,” Anatole, a member of the campaign and the chairperson of Kabegaramire village, told Al Jazeera.

“We want the forest to stay, we don’t want sugarcane,” the father of eight said.

Located 250 kilometres (155 miles) northwest of Uganda’s capital, Kampala, Bugoma Forest covers more than 400 square kilometres. It is home to 38 species of mammals, of which four are globally threatened and nine are listed in the International Union for Conservation of Nature’s red list. Some 600 chimpanzees, classified as endangered and of global conservation concern, live in this stretch of tropical rainforest.

In a preliminary ruling in May, Justice Musa Ssekaana, head of Uganda’s high court civil division, dismissed a lawsuit filed by three civil society groups, who are part of the Save Bugoma Forest campaign, aimed at halting the clearing. In the court ruling, Ssekaana called the lawsuit an attempt to “suppress the real facts” by “exaggerating that the entire forest is being cleared for sugarcane planting”.

Uganda’s bar association, a body tasked with advising the government on matters of jurisprudence, took the matter in its hands on May 18, when it brought the case to the constitutional court.

“The high court ruling sets a very bad precedent,” Pheona Wall, president of the Uganda Law Society, told Al Jazeera. “We have a bit more confidence in the constitutional court because it sits as a panel of eminent judges,” as opposed to a single judge.

No date has been set yet for the hearing.

The origins of the legal wrangling over Bugoma forest date back to 2016, when Hoima Sugar – a private subsidiary company to the agro-forestry giant Sarrai Group (PDF) operating in Uganda, Kenya, and Malawi – obtained a 99-year-long land lease from Uganda’s ancient kingdom of Bunyoro-Kitara, one of five traditional kingdoms to which the government of President Yoweri Museveni gave back some land titles in 2011.

The plot returned to Bunyoro-Kitara incudes the Kyangwali Ancestral Land site, which has since become an object of contention between the Bunyoro-Kitara kingdom and the National Forestry Authority (NFA), the governmental body mandated with managing forest reserves.

The NFA claimed the Kyangwali Ancestral Land included parts of Bugoma forest, a natural reserve gazetted in 1932 without clear demarcation lines. According to the 1998 Land Act, protected areas may not be leased out or sold.

The NFA took Bunyoro-Kitara and Hoima Sugar to court to oppose the lease, on the grounds that the Kyangwali Ancestral Land includes patches of protected land. In April 2019, the court case was thrown out and the NFA ordered to withdraw its officers from the woodland.

Members of the Save Bugoma Forest campaign have claimed corruption has played a role in the lease. However, in August 2020, the National Environment Management Authority (NEMA), a governmental entity tasked with supervising and coordinating environmental activities, approved the environmental assessment, giving the project the final go-ahead.

According to the environmental and social impact assessment (ESIA) drafted by Hoima Sugar, the Kyangwali Mixed Land Use Project “will involve establishing a sugar cane plantation with the associated infrastructure including roads, work camps, a primary school, Secondary School, Technical School, Hospital and an urban centre”.  The plan also includes an eco-lodge, walk trails, camping sites and an area for natural conservation.

The ESIA envisages “a number of environmental and social impacts resulting from the establishment of this mixed-use project”, including deforestation, soil degradation, micro-climate modification and biodiversity loss. However, it lists among its mitigation strategies that it will “avoid well vegetated areas” and “leave moist tropical vegetation thickets within the woodlands undisturbed”.

Shortly after NEMA’s approval, Save Bugoma Forest campaigners hired the Environmental Law Alliance Worldwide (ELAW), a US-based network of public interest lawyers, to conduct an impartial review of the ESIA. The organisation found the mapping of the document to provide no site lay-out plans and a vague location of project components, to the extent that “stakeholders and decision-makers are unable to rationally decide whether the proposed project is acceptable from an environmental and social standpoint”.

Three civil society groups – the Africa Institute for Energy Governance (AFIEGO), the Water & Environment Media Network (WEMNET) and the National Association of Professional Environmentalists (NAPE) – presented these findings as part of a lawsuit against the environmental agency in September, which Ssekaana, the high court judge, threw out in May.

Open-source satellite imagery shows extensive signs of deforestation within the thick canopy of Bugoma Forest beginning in September 2020, shortly after NEMA’s approval, rapidly expanding in April and May 2021.

Hoima Sugar, which describes itself as a “green field sugar factory and distillery”, is a private company registered in Uganda in December 2011. It is owned by four members of the Rai family, a billionaire household that controls multiple inter-related agro-manufacturing companies across East and southern Africa.

According to documents deposited at the Registrar of Companies in Kampala, Hoima Sugar shares a postal address with Nile Plywoods (U) Ltd, a wood manufacturer controlled by two members of the Rai family and a subsidiary of the Sarrai Group. Sarbit Singh Rai, a Kenyan national, figures in the registration documents of both companies.

Local journalists requesting information from Hoima Sugar on the ongoing clearance and on the destination of the logged wood told Al Jazeera they have become targets of the Uganda People’s Defence Force (UPDF), a police force under the command of Museveni mandated to “guard nationalism” and “support socio-economic transformation”.

Vanex Watebawa and Joshua Mutale, two members of Uganda’s environmental media collective WEMNET, were detained in September while on their way to a radio talk show to discuss the obstacles in reporting on Bugoma Forest. They were released on bond after spending several hours in custody. Police said the arrest had been a preventive measure to avoid a demonstration in the area.

In October, journalist Gad Asaba was detained by UPDF officials while on the ground in Bugoma to verify deforestation claims. He was released with no charges after spending five hours in custody. The authorities said they had mistaken him for an illegal logger.

“It’s becoming very difficult to get first-hand information,” Watebawa said. “The space for freedom of the press is continually shrinking and political and environmental reporters are becoming targets.”

A 2020 Global Forest Resources Assessment by the Food and Agriculture Organisation (FAO) estimates Uganda’s total forest area at 9 percent of the country’s land size (240,000 square kilometres), compared to 24 percent forest cover in 1990 – a loss of more than 3 million hectares of forest in 25 years due to unsustainable or illegal trade in forest products and the expansion of agricultural land, among other factors.

In 2020, Nile Plywoods (U) Ltd received a financial incentive of around $340,000 to plant trees in Nakasongola and Jinja as part of a United Nations-led project in support of sustainable commercial tree planters. Leonidas Hitimana, chief technical adviser at FAO, told Al Jazeera that the company qualified in 2016 to take part in the Sawlog Production Grant Scheme III, which supports tree farmers in establishing tree plantations.

“With the increasing demand for wood and dwindling supplies from natural forests, forest plantations are a feasible intervention to provide sustainable supply of wood and reduce pressure off the existing natural forests,” Hitimana said.

The UN agency found commercial agriculture to account for about 40 percent of tree cover loss on a global scale. In Africa, FAO estimates sugar production will increase by 40 percent (PDF) by the end of 2029, due to an increase in output in sub-Saharan countries. Globally, the total global sugarcane production has risen fourfold since 1965, in line with population growth and a rise in demand for sugar-rich products and drinks.

Tony Achidria, senior public relations officer at NEMA, declined to comment for this article on the grounds that legal proceedings are ongoing.

In a press statement in August 2020, NEMA said “all the fragile ecosystems within the project area … shall be protected” and called the project a “remarkable case of sustainable development”.

Norman Lukumu, the former prime minister of Bunyoro-Kitara kingdom who was in office when the lease agreement was signed, told Al Jazeera that the area designated for the project is distinct from the gazetted Bugoma Forest and did not include wooded areas.

“That’s very clear in the agreement,” he said. “If the company is not respecting its terms, then someone should stop them.”

Bunyoro-Kitara kingdom receives lease payments from Hoima Sugar, however Lukumu said he was not authorised to provide exact figures.

Aisha Alibhai, communications and public relations officer at Uganda’s forest authority, the NFA, the government agency that manages Uganda’s forest reserves, told Al Jazeera that they are “not giving up the fight for Bugoma”.

“We call on all international organisations to join us in the fight,” Alibhai said.