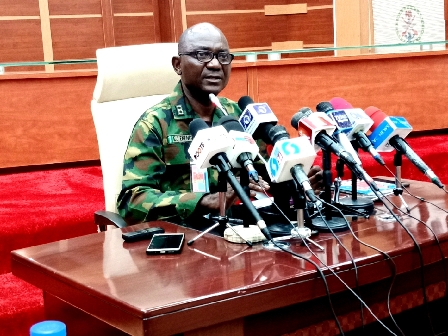 The Nigerian Army on Friday said its combined troops have pounced on some fleeing Boko Haram and Daru Salam sect members in Toto, Nasarawa State.

The combined troops of Guards Brigade, operating with Troops of Operation Whirl Stroke and supported by the Nigerian Air Force have had successfully dislodged the criminals from their hideout.

Enenche said that the troops conducted a successful clearance operation on Tuesday and Wednesday at the location as a follow up exploitation against fleeing Boko Haram and Daru Salam sect members recently dislodged from their camps by troops of Guards Brigade at Uttu general area of the state.

” The operation was a follow up exploitation against fleeing Daru Salam Sect members recently dislodged from their camps at Uttu general area of Nasarawa State.

” During the operation, troops engaged the criminals and neutralised four of them.

” In all the operations, most of the bandits and criminals fled or escaped with gun shot wounds with narrow chances of survival,” he said.

Enenche also disclosed that the troops of Operation Lafia Dole (OPLD) also carried out an intensive clearance operations across the theatre leading to killing of several of Boko Haram/ISWAP elements.

According to him, troops of Operation Hadarin Daji, Operation Whirl Punch and Operation Whirl Stroke in Zamfara, Niger and Nasarawa states neutralised several bandits, rescued kidnapped victims and recovered some equipment during the period.

Enenche said the feats were achieved through ground and air operations.

” Efforts to curb crude oil thefts and protect economic assets of the country within the period yielded positive results.

“Cumulatively, about 65,000 litres of illegally refined Automotive Gas Oil (AGO) and 943.5 barrels of suspected stolen crude oil were impounded from oil thieves.

“The Armed Forces of Nigeria will remain committed to protecting our Exclusive Economic Zone in order to curtail economic sabotage and ensure the economic security of the maritime environment.

“On this note the Armed Forces of Nigeria wishes to thank the general public for its support and further solicit its cooperation towards providing credible and timely information that will facilitate proactive engagements in our operational commitments,” he added.