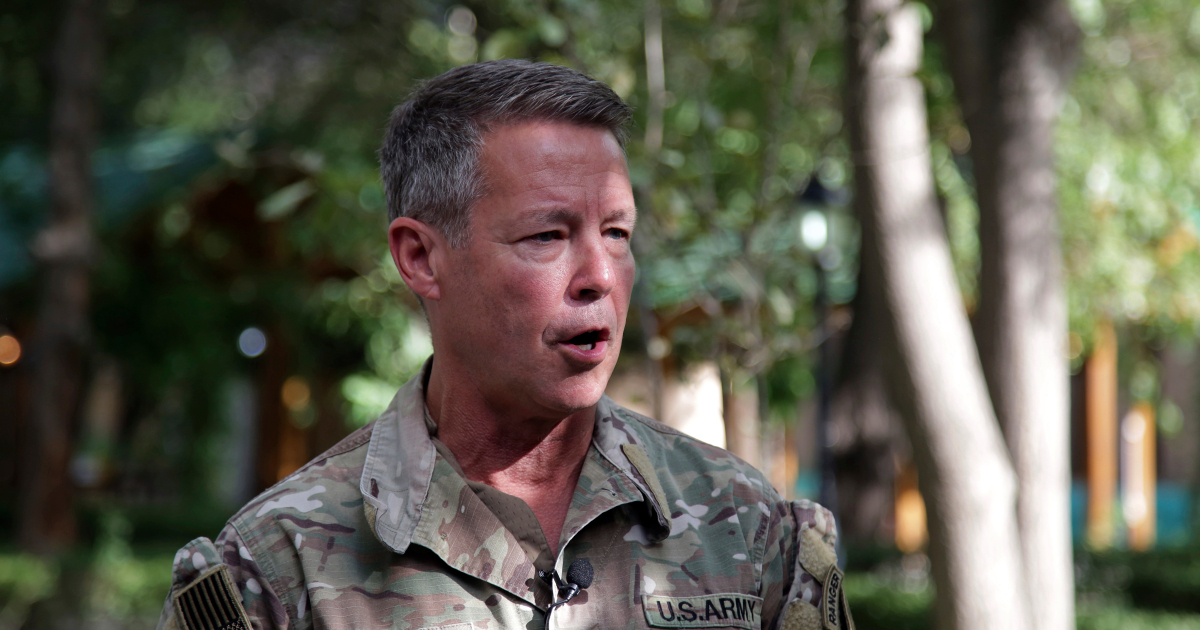 Kenneth Mackenzie will assume authority from four-star General Scott Miller as the US ends its 20-year war in Afghanistan.

The top US general in Afghanistan relinquished command on Monday at an official ceremony in the capital, the latest symbolic gesture bringing America’s longest war nearer to its end.

At a time when the Taliban are making sweeping advances across the country, General Austin “Scott” Miller – the highest-ranked officer on the ground in Afghanistan – handed command to General Kenneth McKenzie, an AFP news agency correspondent at the Kabul ceremony reported.

Miller has been in Afghanistan since 2018, but in May was charged by commander-in-chief President Joe Biden with organising the final withdrawal of US troops, to be completed by the end of August.

Since May, most of the 2,500 American troops remaining at that time have left, and the US has also handed over to Afghan forces Bagram Air Base, from where coalition forces carried out operations against the Taliban and armed groups for the past two decades.

About 650 US service members are expected to be stationed in Kabul to guard Washington’s sprawling diplomatic compound, where Monday’s ceremony took place.

President Joe Biden has reiterated that the US will remain engaged in Afghanistan with humanitarian assistance.

The US also is committed to spending $4.4bn annually to fund Afghanistan’s security forces until 2024.

The handover took place in the heavily fortified Resolute Support headquarters in the heart of Kabul at a time of rapid territorial gains by Taliban fighters across Afghanistan.

In a flag-passing ceremony, Miller remembered the US and NATO troops killed in the nearly 20-year war as well as the thousands of Afghans who lost their lives.

He warned that relentless violence across Afghanistan is making a political settlement increasingly difficult.

The outgoing commander said he has told Taliban officials “it’s important that the military sides set the conditions for a peaceful and political settlement in Afghanistan … But we know that with that violence, it would be very difficult to achieve a political settlement.”

The Afghanistan National Defense and Security Forces, mostly funded by the United States and NATO, have put up resistance in some parts of the country, but overwhelmingly Afghan government troops appear to have abandoned the fight.

In recent weeks, the Taliban have gained several strategic districts, particularly along the borders with Iran, Uzbekistan and Tajikistan.

Afghanistan’s National Security Adviser Hamdullah Mohib who attended the handover said the US and NATO withdrawal has left a vacuum that resulted in Afghanistan’s national security forces stranded on the battlefield without resupplies, sometimes running out of food and ammunition.

In comments after the ceremony, Mohib said the greatest effect of the withdrawal is a lack of aircraft to resupply troops.

Currently, the government is regrouping to retake strategic areas and defend its cities against Taliban advances.

The Taliban control more than one-third of Afghanistan’s 421 districts and district centres. A Taliban claim that they control 85 percent of the districts is widely seen as exaggerated.