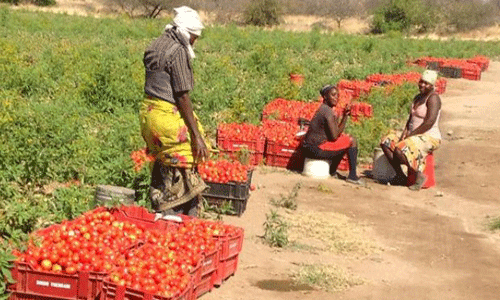 Some tomato farmers in Kumo, Gombe have advocated for pest control measures to accelerate cultivation of tomato and perishable produce in the state.

A cross section of the farmers made the call in separate interviews with the News Agency of Nigeria (NAN) on Wednesday in Kumo community of Akko Local Government Area of the state.

Alhaji Yaya Siddau, a tomato grower in Wuro-YayanGari village, said that cultivation was becoming more difficult due to pest infestation of tomato plants.

Siddau lamented that pests were more prevalent during rainy season and exposed them to losses, describing the trend as discouraging.

“I have been a tomatoes farmer for over 32-years. I have not experienced this kind of pest destruction in the past six years, we have battled with tomato disease.

“We call for the Federal and State Governments’ intervention to boost cultivation and halt farmers jettisoning tomato cultivation for other crops because of pest invasion,’’ he said.

Another farmer, Mai-Anguwa Mohammed, said that many people in the area engaged in tomato and perishable produce cultivation in view of its lucrative nature.

Mohammed added that most farmers lost their investments to the pests due to the lack modern technologies to control it.

“We no longer get good returns,” he said, and appealed to the government to assist them with chemical and irrigation facilities to encourage productivity.

Also commenting, Mr Ibrahim Mustapha, the Chairman of the Tomato Farmers Association in the area, said tomato and other perishable produce cultivated by farmers were been transported to other  parts of the country and Niger Republic.

“Pest control is imperative to sustain tomato cultivation which provide means of livelihood to our people.

“It is because of the mass cultivation that a tomato processing plant was set up by the defunct  Bauchi State Government.

“Even though, the company is moribund, it is a proof of our contribution to the national food security,” he said.

When contacted the state Commissioner for Agriculture and Animal Resources, Mr Mohammed Magaji, said that he would liaise with officials of the Agricultural Development Programme (ADP) over the issue. (NAN)