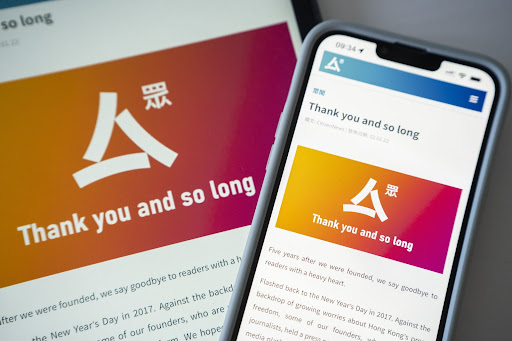 A third Hong Kong news outlet announced it would shut as the city installed a legislature vetted for loyalty to the Communist Party, in a stark illustration of Beijing’s success in silencing the local opposition.

The milestones unfolded in dramatic split screen as Citizen News briefed reporters on its decision to close at midnight at the same time as dozens of pro-establishment lawmakers were sworn-in one by one in front of the red and gold Chinese national flag. It’s the third independent publication to close in six months as national security police probe journalists in the former British colony, which once enjoyed one of Asia’s freest media environments.

“The indications are clear that overall the media is facing an increasingly tough environment. Those seen as critical or troublemakers are more vulnerable,” Chris Yeung, chief writer at Citizen News, said at a Monday press conference.

“In the midst of those uncertainties, we’re not able to get a clear, reassuring picture. So we’ve decided not to operate,” he added, elaborating on plans the outlet had announced in a statement late Sunday.

Citizen News is the third independent publication to close in six months as national security police probe journalists in the former British colony that once enjoyed one of Asia’s freest media environments. Days earlier, Stand News collapsed under a security investigation that saw seven arrested, while in July the city’s largest independent news source, Apple Daily, shut under intense police pressure that left it unable to pay staff.

Dozens of activists and media professionals have been arrested under the national security law Beijing imposed in June 2020, and authorities have begun charging journalists under a colonial-era sedition law that can jail a writer for as many as two years.

Beijing overhauled Hong Kong’s electoral system last year to reduce the number of directly elected lawmakers, as part of its clampdown on dissent in the wake of 2019’s antigovernment unrest. It also gave national security officials power to vet candidates for their respect of the Communist Party.

The first lawmakers sworn in under that system Monday won their seats in a vote last month that drew the city’s lowest ever turn out in legislative elections. Hong Kong CEO Carrie Lam, who presided over the ceremony, is expected to ask the new legislature to consider proposals for more national security legislation.

Chief Secretary John Lee, Lam’s top aide, defended the government’s actions on Friday in response to a Wall Street Journal editorial that argued “no-one is safe doing business in Hong Kong.” Lee said in a letter that “peace and stability” had been restored and the city would “continue to be an internationally preferred place for business.”

Citizen News had come under official pressure in recent months. The Hong Kong government issued a statement in October accusing the portal of “misleading” readers that Security Secretary Chris Tang had “refused to guarantee” freedom of speech under possible future legislation.

The Communist Party’s Global Times newspaper wrote Monday that Citizen News had published articles “harshly criticising the central government and also the Communist Party of China.” It cited as evidence the outlet’s description of the CCP as a “dictatorship” that abused power.

The Hong Kong Journalists Association, which has also been admonished by the government in recent months, said in a Monday statement it was deeply saddened by the loss of Citizen News. “The closure of media organisations has now had an incalculable affect on the reputation of Hong Kong,” HKJA said. It urged the government to uphold the freedom of the press enshrined in the city’s mini-constitution, the Basic Law.

Citizen News said in its Sunday statement that it had been founded “against the backdrop of growing worries about Hong Kong’s press freedom” on Jan. 1, 2017, and since gone on to employ dozens of reporters.

“We have never forgotten our original intent,” it said. “Sadly, we can no longer strive to turn our beliefs into reality without fear because of the sea change in the society over the past two years and the deteriorating media environment.”