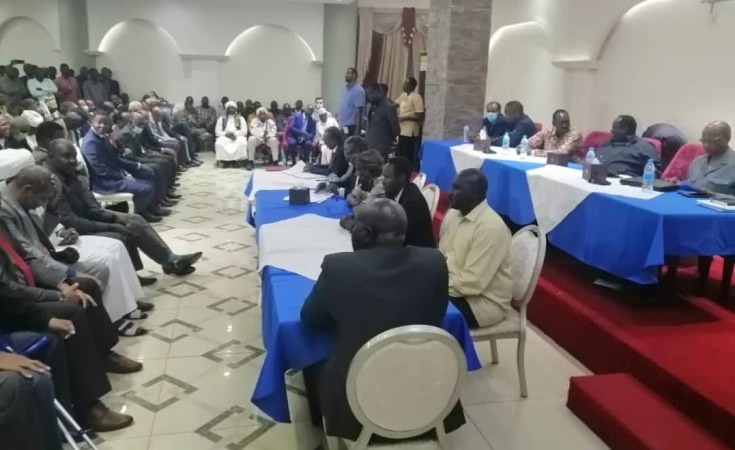 Sudan’s transitional government on Monday signed a peace deal with rebel groups, in what donors and activists said signals a permanent end to the decades-old civil war.

The Sudanese parties crowned marathon negotiations that lasted more than a year in Juba, South Sudan, which mediated the talks.

The agreement contained timelines that if implemented could bring rebel group leaders into the mainstream government in about 18 months.

It includes most of the armed movements in the country, most notably the Popular Movement in the Northern Sector which is led by Malik Agar, the Justice and Equality Movement led by Gibril Ibrahim and the faction of the Sudan Liberation Movement led by Minni Minawi.

The mediation in Juba focused on areas including the Darfur region (west), the states of South Kordofan (south) and Blue Nile (southeast), eastern, northern, and central Sudan.

Among those who attended the ceremony were the head of the Sudanese Transitional Sovereign Council, Lieutenant-General Abdel Fattah Al-Burhan and Prime Minister Abdullah Hamdok, who arrived earlier.

Mr Hamdok said: “Today is the beginning of the long road to peace, peace that needs a strong and solid will, like the will of December, which shattered the fortresses of tyrants.”

He added, “I dedicate the peace deal we signed today in the brotherly State of South Sudan to children who were born in displacement and refugee camps, and mothers and fathers who long for their villages and cities, waiting for the glorious December revolution, the promise of return, the promise of justice, the promise of development and the promise of safety.”

“Rather, we have lost all the past and may lose the future if we do not admit to failure and face it with the truth,” he said. “We stand today on the right side of history, bypassing those regrettable phases.”

He described the signing as “representing the birth of a new dawn for our country”.

Suliman Baldo, a Senior Advisor at The Sentry, a governance watchdog supported by American Actor George Clooney, said the event signaled a step towards lasting peace in Sudan.

But he called on the government to continue discussions with groups that stayed away from the deal.

“The agreement doesn’t offer a clear separation of state and religion as demanded by SPLM-AL-Hilu and many Sudanese who denounce the weaponisation of religion in Sudanese politics,” he said in a statement on Monday.

“Many in Sudan are also apprehensive about the armed movement’s insistence on an over-representation in government positions, which is delaying the transition to democracy.”

The United States, the United Kingdom and Norway (the Troika) welcomed the peace agreement between the Sudan Revolutionary Front (SRF) and the Civilian-led Transitional Government of Sudan.

The head of the Sudanese Sovereign Council, Abdel Fattah Al-Burhan asked the remaining rebel leaders – Abdelaziz al-Hilu and Abdel-Wahid Nour to sign peace the deal.and be apart of rebuilding Sudan.

The Sudan Liberation Army Movement faction led by Abdulwahid Nur, and SPLM-North led by Abdel Aziz Al-Hilu were not party to the agreement.

The security advisor to the President of South Sudan, Tut Qalwak, praised Juba’s success in making peace, saying the people expressed their happiness by stopping the wars in their country and South Sudan, so they sang for them on the “wedding of peace”

“We believe the military option is not a solution to Sudan’s internal problems,” he said, and called on the international community to stand by the people in implementation of the provisions of the agreement, with political support and resources to support the peace process.

The parties reached understandings on the division of power, security arrangements, compensation for war victims, and other important issues

Sources reported that the agreement includes autonomy for the Blue Nile and South Kordofan regions, with the resources and income of the two regions divided into two – 60 per cent for the federal authority and 40 per cent for the local area.

According to the sources, among the most prominent provisions of the agreement is the granting of 25 per cent of cabinet seats, another 25 per cent of those legislative and three per cent in the sovereignty to the Revolutionary Front.

The agreement includes extending the transitional period in Sudan by an additional 39 months, starting from the date of signing of the agreement.

The transitional period in Sudan began in the second half of 2019, a few months after the fall of Omar al-Bashir’s regime.

A popular revolution from April that year led to a 39-month political transition period that started in September.

Among the terms of the agreement is also setting a 39-month period to end the merger and demobilisation of forces affiliated with the armed movements, as part of several measures included in the security arrangements.

Last September, the Sudanese parties signed the “Juba Declaration” for pre-negotiation issues, including the ceasefire, humanitarian issues and compensation, but according to this extension, the parties seek to reach peace that ends the conflict.

The Sudanese are counting on signing a comprehensive peace agreement that ends decades of internal wars.

This is one of the main demands of the December revolution that toppled the Bashir’s regime in April 2019.