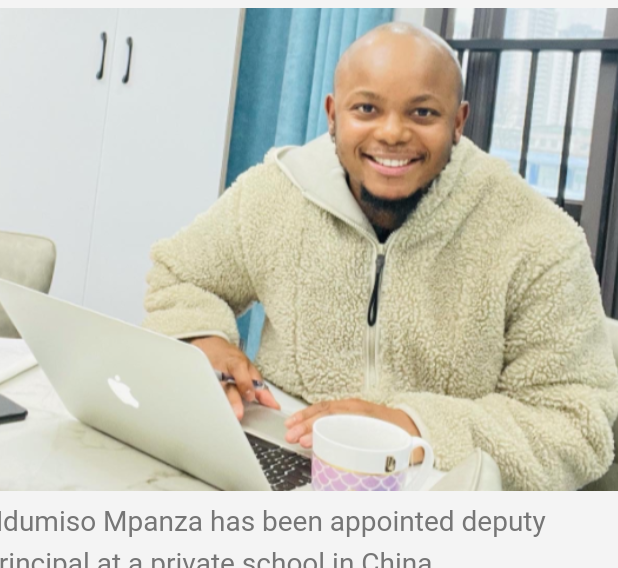 A South African-born teacher from KwaZulu-Natal who still holds his Zulu accent has been making strides in Asia’s education system, and was recently appointed deputy principal of private school in China.

Ndumiso Mpanza, 28, not only holds the high leadership position at the Interlingua School in Guizhou province, but is also a shareholder in the school.

Speaking to TimesLIVE, Mpanza said his exposure to China’s technologically advanced schools has not altered his perception that the SA schooling system remains in a league of its own.

“If I had to compare the SA system to the rest of the world, not just China but Europe, other parts of Asia and America, the SA system is by far one of the finest in the world.

“The challenge is that we need to be stricter on things such as the pass mark and implementation. However, the moment you read basic education minister Angie Motshekga’s white paper on education you get to understand her vision and where she wants to take the education system.

“If the education system was as bad as people make it seem, why do first world countries want to employ teachers from SA? If we had a messy and unprofessional system, they would definitely not want to hire us. Once they hire us, they give us high salaries,” said Mpanza.

More SA teachers are taking the leap across continents to pursue teaching opportunities in Asia.

Mpanza said for many the move was encouraged by the high unemployment rate in SA and the ability to earn more in China while saving for a comfortable return to the country.

If the SA education system was as bad as people make it seem, why do first world countries want to employ teachers from SA? If we had a messy and  unprofessional system they would definitely not want to hire us

A similar motivation pushed Mpanza to start dreaming about a teaching life abroad shortly after he started his career in SA.

Mpanza said after completing matric, he had taken a gap year and worked as a waiter and later manager at restaurants in the Ballito area. A need for something more secure led to him applying for his education degree at the University of Pretoria. After qualifying and working in Mpumalanga and Gauteng schools, Mpanza said he longed for more.

“I wanted a new challenge and growth of the mind. I saw an advert that the Chinese were recruiting teachers and I got onto my application. Within a week, I had my interview. Within three days I had a contract and I signed. Next was getting the paperwork sorted. Within the third week, I was getting ready to leave the country and I resigned with immediate effect from my job,” said Mpanza.

He has been working in China for more than two years and has made his mark and flown the SA flag high. Last year he bagged the best international teacher expert of the year award after he achieved a 100% pass rate in biology at the school in which he was teaching. Around 95% of the pupils he taught achieved straight As.

He has also landed a job promotion and was, prior to his appointment last month, given an acting deputy principal position.

“I guess they were testing my capabilities in the role because it is a heavy leadership seat,” he said.

Mpanza said his role involved more than providing support to the principal and included conducting interviews, hiring foreign teachers, giving them training and resources and developing the curriculum.

While the SA education system was rocked by the Covid-19 pandemic which saw many disruptions to the school calendar, Mpanza said China being a communist state meant the government played an integral role in the country’s fight against Covid-19.

“Giving 100% power to the people will sometimes have effects that are negative. In China, when the government said everyone was being quarantined, it was like that. But at the same time, they didn’t tell you to quarantine for 14 days and then leave you like that. Once they had provided the instruction, they provided water and food and ensured your internet and television cable service was paid. We were well looked after.

“In SA, they had an injection of R500bn, took loans from other countries but where did it all go? That was meant to provide assistance to people. But because of corruption, it did not happen that way. Corruption played a part in the rapid spread of Covid-19 in SA. China was the opposite,”  he said.

China was also well prepared to handle Covid-19 in schools.

“Schools were given proper support in terms. Classes were online, students were given tablets and teachers, which is the most important part for me, were given training. The government didn’t just instruct teachers to give classes online. They were trained on new software and systems. In 2019 December, when the news broke, 30 days after that there was a programme rolled out to train teachers on the new software. Teachers were trained for about 60 days were then asked to go through the trial stages,” he said.

Mpanza’s long-term plans include returning to SA where he hopes to impart the skills and knowledge he has picked up in China.