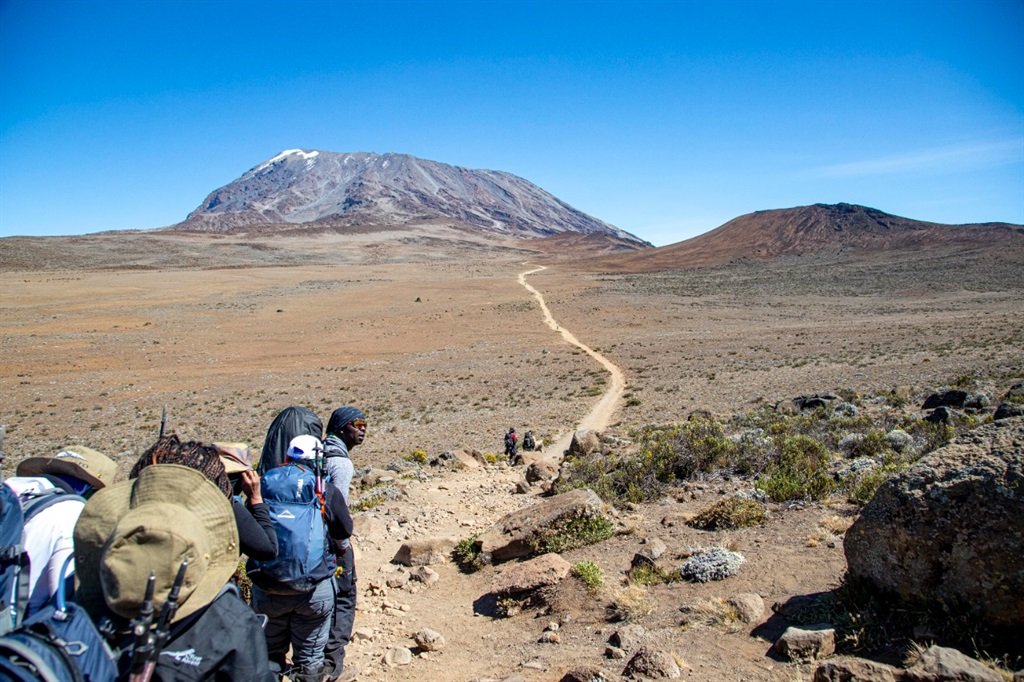 The climbers, forming the second Trek4Mandela superwoman group and led by accomplished mountaineer Sibusiso Vilane, followed the oldest and most established route to summit Kilimanjaro in Tanzania.

The programme, founded by the Imbumba Foundation, seeks to address period poverty faced by many girls in South Africa and the rest of the globe by providing sanitary towels, puberty education and menstrual hygiene support to adolescent girls.

The Marangu Route, meaning “a place where the water streams” in Swahili, is well loved by tourists and, although described as “the least arduous”, can still challenge experienced climbers.

Mount Kilimanjaro is a dormant volcano with three volcanic cones named Kibo, Mawenzi and Shira. It’s the highest mountain in Africa and also the highest freestanding mountain, towering at a colossal 5 895 metres above sea level.

The group included South African women from all walks of life, who undertook the challenge to raise awareness for the Imbumba Foundation’s Caring4Girls Programme, which aims to give a voice to young girls, instil dignity and foster confidence.

Caring4Girls was started in 2012 after founder Richard Mabaso overhead a conversation between his mom and niece about menstruation, which to this day is deemed taboo by many.

Mabaso has summitted Mount Kilimanjaro numerous times and Vilane has done so 32 times.

He decided to open the conversation to become more inclusive and the mountain climbers are a key source of funds. The most recent climb started on 5 August and the group summited on Women’s Day.

The Imbumba group make sure the climbers are ready for the summit by doing regular training weekends in the Drakensberg throughout the year and making sure participants climb regularly in their prospective provinces.

In the Western Cape, the group focussed on the Platteklip Gorge walking route on Table Mountain and the group in Johannesburg used the Westcliff Stairs for training. It is also compulsory for the climbers to take medication to help with altitude sickness, and this gets dispensed by the doctor that accompanies them on their route.

On arrival at the main entrance, climbers learn their first and most important Swahili phrase “pole, pole” (meaning “slowly, slowly”). This is a friendly reminder to take it nice and easy, and is a standard greeting from passing guides and porters. The slow pace helps climbers to acclimatise and is kept all the way to the top at Uhuru Peak, one step every two to three seconds.

Making way for the Porters who carrying no less th
Making way for the Porters who carrying no less than 20kg each from Mandara Hut to Horombo on Kilimajaro. The average porter will climb Kilimanjaro between 3 to 4 times per month, many of which is their only source of income. Porter commonly say “Jambo!”, meaning “Hello!” when walking past.
Adrian de Kock
Before the climbers start the ascent, they watch as porters and chief guides weigh and pack for the journey of five days. The porters carry the climbers’ duffel bags, packed with each day’s clothing and toiletries, weighing no more than 15kg. Each porter carries 20kg in total – this includes all the water and food for the journey.

The only female porter in the group, and single mom of three, Mary Daniel, 42, was no exception. She has conquered the mountain around 15 times each year for the past three years, a job that helps to support her family on their small farm.

Tears of joy and pain

The climbers start off with an 8km hike through the tropical rain forest from Marangu Gate to Mandara Hut. Above the tree tops, the climbers had a few encounters with blue monkeys, the last animals spotted aside from the ravens that follow all the way to the last camp.

The accommodation is made up of wooden cabins, some of which even have en-suite bathrooms and much-needed solar panels. Internet reception varies, but the climbers did have the odd chance to communicate with loved ones on the way. Climbers are served meals specifically aimed at building strength and stamina, while one climber’s birthday was celebrated with cake.

After dinner, climbers sat around sharing stories and drinking copious amounts of ginger tea, which helps with altitude sickness.

The next day was a 12km hike which included the climbers’ first glimpse of the mountain. The third day, also known as a rest day, is a time to help climbers acclimatise and reflect and sees the participants walking 10km from Horombo Hut up to Zebra Rock. The rock is predominantly a lava cliff and the stripe pattern was formed when mineral-rich rainwater flowed down.

The guides on the mountain are well acquainted with South African climbers.

One guide, 50-year-old Prosper Evord Mwami, who had been climbing the mountain for more than seven years, has picked up some Afrikaans along the way, including well-known sayings like “Lekker, lekker soos ’n krekker” and “Bakgat”, from South Africa climbers, including Francois Pienaar the former Springbok skipper.

On the fourth day, climbers make their way from Horombo Hut to Kibo Hut covering a distance of 10km through the Alpine Desert habitat. With the end in sight, Vilani took the climbers on a short hike up the summit.

“From tonight things are changing. It’s a game of two, it’s you and that mountain. Tonight is no longer about guides or me. This is your mountain… it’s your time to step up to the plate to fight your way to the top,” Vilani said during his pep talk with the team.

The trek to the summit began at 22:00, and each climber carried about four litres of water with them. They were advised to sip from the water every few minutes to prevent it from freezing inside the containers in the below-zero temperatures.

As the sun rose, climbers were greeted by the magnificent Mawenzi mountain, with Kenya on the one side and Tanzania on the other.

As the climbers summited the peak a few hours later, there were tears of joy and pain as many reflected on the journey women have taken in the fight for their rights.

Trek4Mandela project manager Sina Moyane said, through the Trek4Mandela programme and corporate sponsors, they had managed to empower 1.5 million girls.