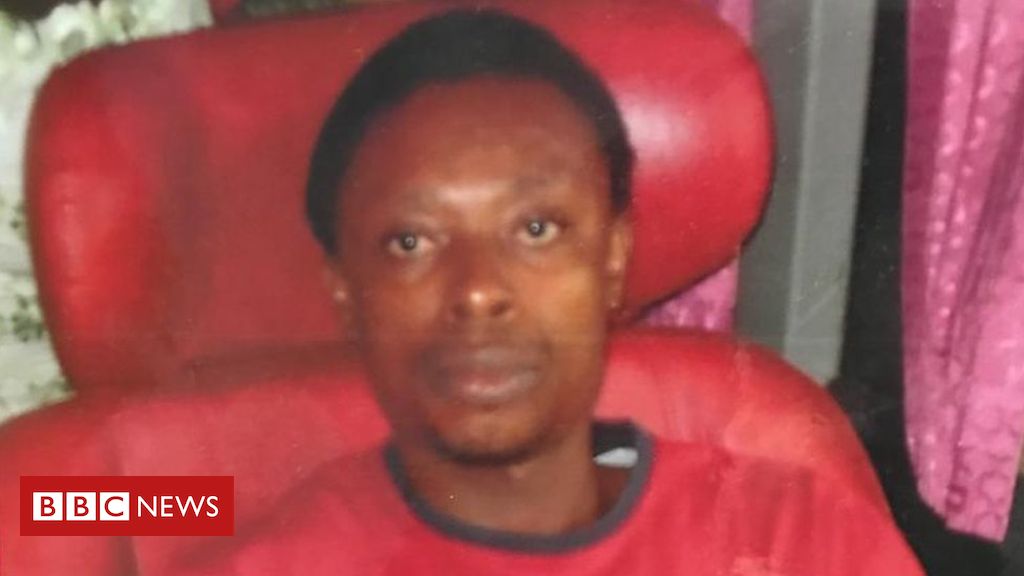 A mentally ill man died from dehydration, malnutrition and hypothermia “in plain sight” at an immigration centre, an inquest found.

Prince Kwabena Fosu’s death at 31 was partly due to “gross failure” by agencies at the centre, the jury said.

Mr Fosu was left in an isolation cell for six days without bedding while he suffered from a psychotic illness.

The Home Office said the standard of care had been “unacceptable” and new safeguarding steps had been introduced.

The jury at West London Coroner’s Court found that procedures to protect vulnerable detainees at the centre were “grossly ineffective”.

Agencies running the centre and its healthcare failed to recognise, monitor and respond to the worsening condition of someone who was unable to look after himself, they found.

Stripping the bedding and mattress from his cell without any lawful written authority was an indication of the “casual approach” of centre staff to Mr Fosu’s welfare, the jury said in its conclusions.

Speaking after the inquest, prisons and probations ombudsman Sue McAllister said it was “inhuman and degrading” for Mr Fosu to have been “segregated, living naked in a room dirty with faeces, urine and uneaten food” with no justification or review of the isolation.

Mr Fosu arrived in the UK from Ghana in April 2012 on a valid business visa, but it was cancelled at Heathrow Airport.

He appealed but in September 2012, his appeal was rejected. In October, he was arrested: a passer-by called police after seeing him walking naked on a road in Kettering, Northamptonshire.

At Corby police station, officers said he continued to act bizarrely and kept undressing, but medical professionals said he did not need to be sectioned.

CCTV footage from within the station recorded him being told: “You’re going to an immigration centre. They are going to look after you. Yeah?”

Six days later he was dead in a filthy isolation cell at Harmondsworth Immigration Removal Centre.

At the centre, healthcare services were in “chaos” after the previous provider had been “sacked” the year before, a healthcare manager told the inquest.

A nurse assessed Mr Fosu in five minutes without seeing his medical notes, later telling the inquest she had done a “completely inadequate assessment” and was “out of her depth”.

Mr Fosu was seen by a cellmate to be acting oddly and talking to himself in the mirror. When approached by staff, Mr Fosu assaulted one of them and had to be restrained by at least three officers.

Labelled as being disruptive and placed in segregation, Mr Fosu had no mattress or bedding and lay naked in his cell.

The jury heard evidence that suggested he barely ate. Records showed that he drank a sip of tea and he appeared to sleep for only 45 minutes in six days.

Detention centre staff records referred to him shuffling on his bottom, talking to himself in a language people couldn’t understand, defecating in his cell and throwing food.

Staff told the inquest they thought he was protesting about his removal, but no-one asked him about his behaviour.

Because he urinated in his police cell before his transfer, he was labelled a “dirty protester”.

The inquest heard that there were five layers of subcontracting in the provision of healthcare for detainees.

The Home Office contracted the running of the centre to GEO Group UK Ltd, which contracted healthcare to Nestor Primecare Services Ltd.

It in turn contracted the recruitment of doctors to The Jersey Practice – a GP surgery in west London – which used a locum agency, Beacon Care Services Ltd.

GEO staff showed a “casual approach” to his welfare when they removed his bedding and mattress, which contributed to his hypothermia, they concluded.

The jury said the failure of Primecare staff to effectively provide healthcare to Mr Fosu was “inexplicable”, while the GPs showed “insufficient professional curiosity”.

The Independent Monitoring Board, which was at the centre to monitor standards, was “ineffective and inadequate”, the jury also concluded.

Detention centre staff repeatedly said at the inquest that they expected healthcare staff to identify problems with detainees.

The jury heard that Steve Scott, head of residence for GEO, had told an investigation into the death that he thought at the time that Mr Fosu was a “prat”.

Mental health nurse Lesley Dube said he could not remember seeing Mr Fosu but had written in detention centre notes that he had no mental health issues.

He told the inquest he had not carried out a full mental health assessment, nor was he asked to.

During Mr Fosu’s time in isolation, he was seen by four family doctors, who were unfamiliar with all relevant detention centre rules and could not recall seeing Mr Fosu face-to-face in his cell.

Two of those doctors made no notes about him in the GP records, while the other two noted he had declined to be seen but did not assess whether he was well enough to make that decision.

The BBC has learned that three of these family doctors have since been referred to their regulator, the General Medical Council.

The jury also found that staff at Corby police station “failed to react to Mr Fosu’s challenging behaviour” and re-refer him to medical staff.

It also concluded that opportunities were missed by the station’s mental health team to fully look into Mr Fosu’s medical background and history, “resulting in an inadequate mental health assessment”.

The Home Office conceded it had failed Mr Fosu with “tragic consequences”, the jury heard.

Philip Riley, director of detention and escorting services in immigration enforcement, said at the time staff did not have sufficient training or know how to manage detainees with potentially complex mental health issues, adding that the centre was severely short-staffed.

A Home Office investigation identified learning opportunities on detainees in segregation and food and fluid refusal policies. A key failure identified had been healthcare and Home Office staff not seeing Mr Fosu in person.

Responding to the inquest’s findings, the department issued a statement in which it offered its “deepest condolences” to Mr Fosu’s family.

“The standard of care Mr Fosu received was unacceptable, and we must never allow this to happen again,” a spokesman said.

“Since Mr Fosu’s death we have increased the number of staff in immigration removal centres, improved how detainees are managed and safeguarded, including the introduction of the Adults at Risk policy and increased monitoring of vulnerable people in detention.”

The Crown Prosecution Service had decided to charge GEO Group UK Ltd and Nestor Primecare Services Ltd with breaches in health and safety legislation but the charges were dropped in 2018.

Since 2014, healthcare in removal centres has been commissioned by NHS England.

But lawyers and charities working with detainees told the BBC they were still seeing cases where centres do not recognise the seriousness of mental illnesses and failings like some of those in the case of Mr Fosu recur.

Mr Fosu’s father, Prince Charles Obeng, told the BBC it had always been his son’s wish to come to the UK.

Now he is buried in a south London cemetery alongside three others, his father was told. There is a plaque with his name marking the grave, but Mr Obeng wants the government to pay for a headstone.

At his grave, Mr Obeng tells his son he prays that God will give him a better place to stay.