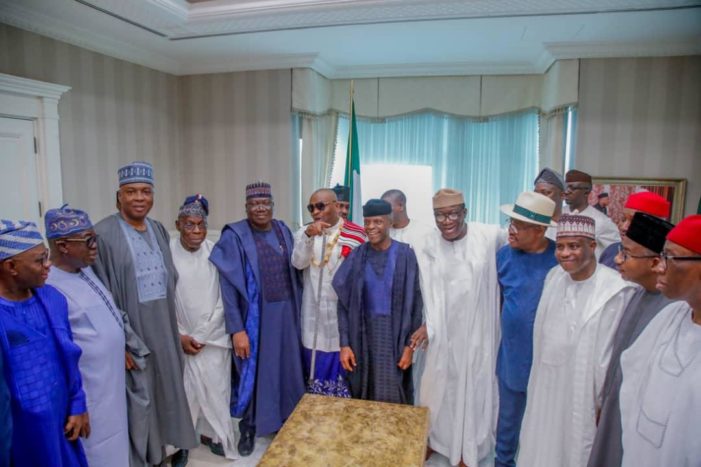 Other Governors that attended the service were Adegboyega Oyetola of  Osun, Seyi Makinde of Oyo and Nyesom Nwike of Rivers States, respectively.

The President of the Senate, Ahmed Lawan, and immediate past Senate President, Bukola Saraki, were also at the event.

Members of the Federal Executive Council, service chiefs, clergies and traditional rulers also put in appearance including the Emir of Kano, Muhammadu Sanusi.

In a goodwill message, Osinbajo said that the late Nkanang did not only spread the gospel but mentored many people.

“Papa was in his life time, a legendary teacher and headmaster who taught and mentored thousands of students many of whom are here today to celebrate his life and times.

“But his greatest legacy will be his faithful and prolific spreading of the gospel of Jesus Christ through the Qua Iboe Church.

“He planted several churches not just in this state and environs but also as far as the North Central zone of Nigeria through the great work that he did.

“It was clear to all that not only was he a teacher and a mentor of men, he was also a spiritual leader and father to many,” he said.

In a tribute, Gov. Udom said he was overwhelmed and felt loved by quality of and level of turn out which cut across political, religious and ethnic divides.

He said he was grateful to all those who came to commiserate with him.

Udom said that his father distinguished himself in his endeavours; impacted positively on his children and left legacies worthy of emulation.

“My father was a man of character, man of substance, a disciplinarian, a mentor and inspiration.

“Papa, we will never forget you; your memories and legacies,” he said.