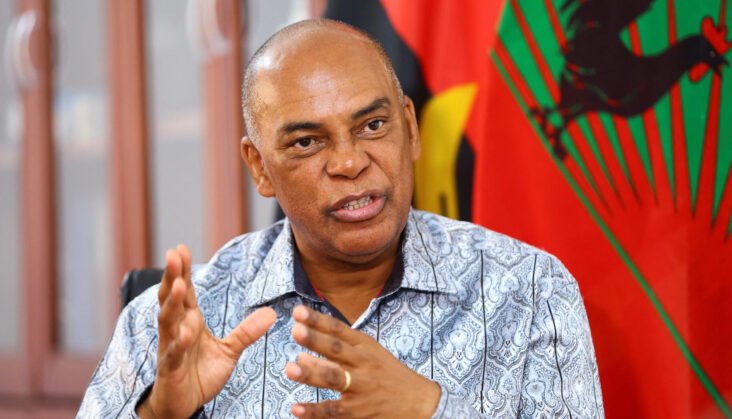 The Movimento Popular de Libertação de Angola (MPLA) has been in power for almost 50 years, winning 61% of the vote in the last national election in 2017. This election will be the country’s fifth general election since multiparty democracy was established in 1992.

Costa had an unconventional beginning, training as an electrical engineer before serving as a lawmaker and the Unita spokesman. In 2019, he became the party leader, and many have attributed the party’s rising success to his leadership.

Now he says that Unita wants to change the constitution to “empower state institutions” and change the presidential election process.

“We will reduce the powers of the president so he can’t be like a god in the land,” he says.

Unita has uncharacteristically excelled this year: In May, an opinion poll by research company Afrobarometer showed the MPLA leading Unita by just seven percentage points.

In an interview on Sunday at his office in the country’s capital of Luanda, Costa Junior said: “The amount of real foreign debt is not known. What we have is the stated debt, and even that is not small.”

Lourenço’s supporters point to the mess left by the previous Dos Santos administration.

The country has been hard hit by the global economic downturn sparked by the Ukraine conflict, which has resulted in rising food and fuel prices.

According to the finance ministry, the country was in $62.5bn of debt as of January. The economic implications of the pandemic led to protests and clashes in the country as issues, such as the rising cost of living, widespread corruption and the alleged misuse of emergency funds, angered the public.

Bloomberg estimates Angola’s foreign debt at $1.75bn, whilst Costa Junior has promised that Unita will keep the nation’s external commitments, including the $19bn the country owes to China for infrastructure investment to build roads, hospitals and trade links.

The country is Africa’s biggest recipient of Chinese loans, having received $28.4bn in 2016.

Although Angola has improved considerably since 2015 in Transparency International’s Corruption Perceptions Index, with the economy simultaneously recovering from a five-year recession, the organisation still gives it a classification of 29 out of 100.

The country has tried to retrieve the billions of dollars that former President Jose Eduardo Dos Santos’s family stole from public coffers and hoarded overseas.

Under current President João Lourenço, the economy has recovered from a five-year recession and its currency has risen 23% against the dollar this year, despite continued allegations of corruption.