Africa: Ideas – With a Dose of Persistence – Make the Impossible Achievable 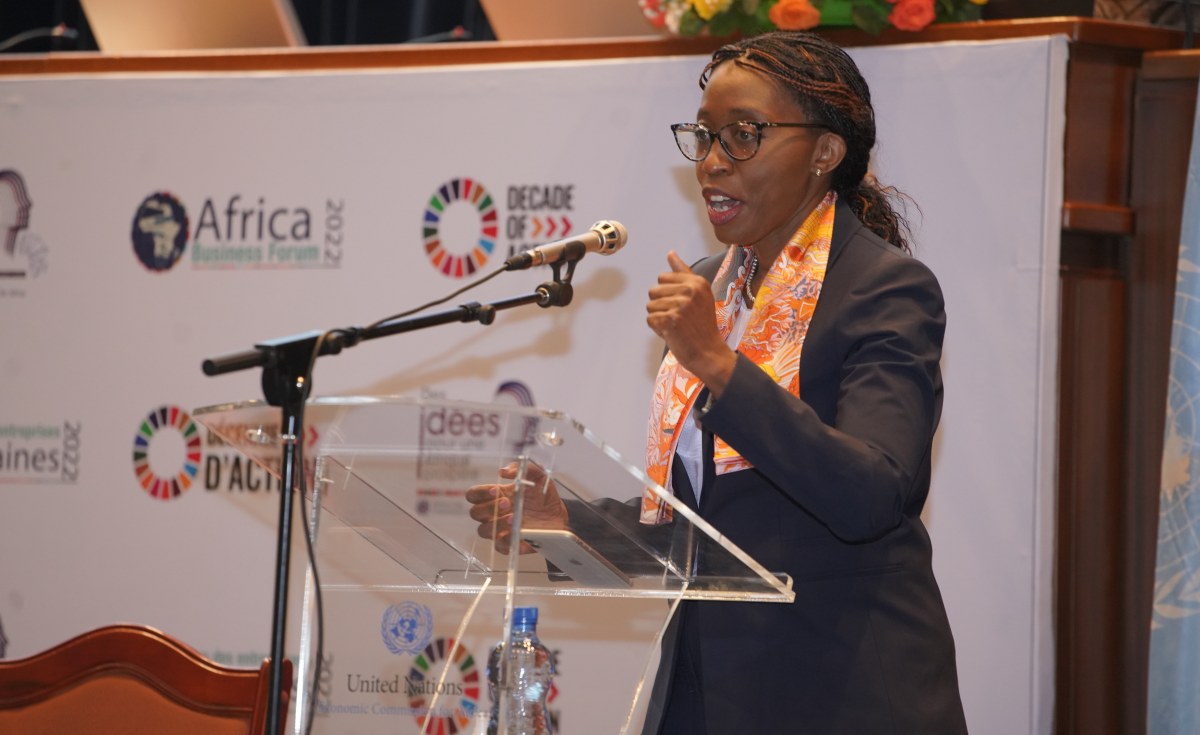 Addis Ababa — Dr. Vera Songwe today announced her departure as United Nations Under-Secretary-General and Executive Secretary of the Economic Commission for Africa at a virtual town meeting for ECA employees and partners. In this guest column, she reflects on her tenure at the UN agency that is devoted to economic and social development across the continent.

Africa has faced an unpredictable world and lived through events once seen as improbable. Volatility continues to reign. The continent’s future has been threatened by the pandemic, the war in Europe, and a general rise in global geopolitical tensions.  Within Africa, a new resurgence of coups and wars and increased terrorist activities have made already complicated situations much more difficult.

Navigating this Black Swan world during my tenure as Executive Secretary of the United Nations Economic Commission for Africa (ECA) has been both a challenge and an immense privilege. It has truly been a unique time at the helm of the continent’s premier economic think tank. As I come to the end of my leadership, I am grateful to the incredibly professional women and men who have been with me on this five-year journey. There was never a dull moment.

The ECA has successfully built more capacity, helped formulate more robust policies, designed new and innovative solutions for development finance, fast tracked regional integration solutions and has successfully been a leading advocate on issues of critical importance to the continent – from the Global Financial Architecture to climate change. Partnering with member states, and with continental and global institutions, we have achieved tangible and measurable results.

The ECA staff has grown from under one-quarter women to 44 percent in the last four years.

The ECA ideas to action mantra has deepened and re-invigorated our focus on results.  A more diverse work force contributed to our achievements as we moved from 23 to 44 percent gender balance between 2018 and 2022.

The war in Ukraine reopened the scars created by the Covid-19 pandemic by putting historic pressure on food, fuel and fertilizer prices. The ECA estimated over six million more people risked falling into poverty on the continent. Most governments had run out of fiscal buffers for subsidies. I was privileged to be part of a five-person team working under the leadership of United Nations Secretary General Antonio Guterres to help find a solution to the problem.  We flew to Moscow, and over several weeks negotiated a deal to re-integrate Ukrainian grain and seeds and Russian grains and fertilizer into global markets.

The United Nations facilitated a deal that has seen the first decline in global grain prices since the Ukraine war began.

The initiative signed by the United Nations, Russia, Turkey and Ukraine has been game changing – a Joint Coordination Center was created to facilitate safe transportation of vessels through the maritime corridors of the Black Sea. We also worked with the United States and the European Union to ensure provisions were made to safeguard grain trade. Less than three weeks after the signing, wheat and cereal prices were back to pre-war levels, delivering huge relief to governments around the world and their populations. The United Nations provided the only olive branch to date in this war. The ECA team is proud to have been part of the solution.

Covid-19 represented another threat to Africa’s people. Vaccines were the magic-bullet response to the pandemic, but Africa was shut out of the market. Under the leadership of South African President Cyril Ramaphosa, with African Union (AU) special envoy Strive Masiwiya, the Africa Center for Disease Control and the Afreximbank, the team at ECA and I worked nonstop for months to secure the first full procurement of vaccines for Africa by African countries. We set up the African Medical Supplies Platform and, later, the African Vaccines Acquisition Team – building institutions for Africa’s future and economic autonomy.

A panAfrican effort has positioned Africa to produce its own vaccines, after being denied equal access to Covid-19 preventions.

In the same spirit, the ECA worked with the African Union and Rwandan President Paul Kagame to advocate and establish the African Medical Association. Today, the continent is building the institutions it needs to source, produce and trade vaccines. Further, the ECA team proposed a protocol adopted by the African heads of state and government which requires that 30 percent of all procurements by global health agencies are sourced from Africa. This is a crucial take-off condition if vaccines and other health products are to be sustainably manufactured on the continent. Lessons from this experience are being used to address the food and fertilizer crisis.

In the spring of 2020, as Covid-19 ravaged economies, many finance and budget ministers had an impossible job. The pandemic shut down economies, wiped out productive activities and brought already low taxes to historically low levels. Africa was confronting its first recession in a generation. Debts were ballooning.

I recall the urgency and heavy weight of the moment. We needed to act with speed and resolve to formulate policies to build resilience. At ECA, we quickly convened the African Finance and Development ministers and designed a strategy we all signed onto, calling for measures to provide rapid economic relief to countries.

We were aligned, as a continent, on policy. Armed with this rare moment of consensus, the ECA and finance ministers and leaders, with our partners, successfully lobbied for and obtained USD 33.7 billion in Special Drawing Rights (SDRs) as well as a G20 endorsed liquidity plan – the Debt Service Suspension Initiative – which delivered an additional 13 billion dollars of liquidity to countries.

This provided economic and social support to all our nations during the pandemic. I’m really proud of the African Finance and Development Ministers group, which has continued to convene since its creation, and has been a force for collective advocacy and solutions. Once again, the ECA was at the center of providing tangible solutions when they were most needed.

Unlocking barriers to trade within our rich continent will be transformational. The African Continental Free Trade Area (AfCFTA) holds the promise of full integration and free movement of goods and services among the 43 countries that have signed and ratified the provisions so far. It has been a real privilege for me to lead the effort from the ECA and to work with the African Union and the Afreximbank teams under the leadership of President Mahamadou Issoufou of Niger. Enormous progress is being made on the ‘rules of origin’ negotiations.

With the help of the ECA and the Africa Trade Policy Center, 24 countries have finalized their national competitiveness strategies. To monitor progress, we developed and launched in 13 countries, along with the AfCFTA Secretariat and UN Capital Development Fund, an index to monitor cross-border trade.

The AfCFTA opened a new era of partnerships with the private sector. We launched a pharmaceutical initiative, followed by the battery precursor initiative with Democratic Republic of Congo and Zambia, showcasing the game-changing effect of the AfCFTA on the continent’s economies through value addition.

While Africa showed fortitude during the crisis, it has also demonstrated innovation, energy, dynamism and development during more productive, peaceful and predictable times. Structural reforms were our priority.

Moving from frameworks to implementation is Africa’s challenge. To accompany the continent’s digital revolution, ECA launched the Digital Center of Excellence to work on data improvement, digital Identity, e-commerce, and the Internet of Things.  The ECA team wrote the African Digital Strategy, along with the African Union, approved by Heads of State and Government. We worked with the Republic of Congo to set up an Artificial Intelligence Research Center for Africa; with Togo to establish a Cyber Security Center; and developed the Digital ID program for Ethiopia and in Botswana.

With these new institutions, we believe we have laid the groundwork for action and growth. The ECA team also designed a new census methodology supporting Kenya, Ghana and Rwanda. Today, the time it takes to do a census has been cut from over three years, in some cases, to less than three months. As a result, 33 African countries have updated or are in the process of updating their census. Good data makes for good policies, and Africa is on its way to ending data poverty.

Our focus on domestic resource mobilization has seen us double revenue to GDP in Sudan and increase excise tax revenue in Ethiopia. Under the Illicit Financial Flows agenda, we worked to identify and strengthen institutions needed to halt the flight of additional resources from the continent.

After the sizzling hot summer in Europe, the repeated droughts across Africa and hurricanes in the United States, the impacts of climate are undeniable. At the ECA, we focused first on getting the magnitude of the impact right. African countries spend anywhere between five to eleven percent of their GDP responding to climate hazards.

Collectively, Africa is working on sustainable energy plans to combat the crisis of climate change.

The continent is endowed with vast carbon sinks and pools in its forest and water resources, mainly in the peatlands of the Congo Basin, which contribute enormously to regulate global temperatures. With a rapidly growing market for carbon credits, estimated in the trillions of dollars, Africa can benefit from these market mechanisms to improve revenue mobilization and build more resilient and sustainable societies.

The ECA team, in partnership with Sustainable Energy for All, is developing an end-to-end transparent market based on an African Carbon Registry. At price points of at least USD 50 per ton, African countries could mobilize over USD 15 billion per annum and generate 30 million jobs. As a transition measure, gas may remain the most efficient and cost-effective way to foster the renewable energy era. ECA successfully led the advocacy on the need for gas as a just-transition fuel for Africa – and also as a health-security issue for women who need improved cooking methods.

The past few years have been challenging for Africa and the world. The continent demonstrated resilience. As the world became more insular, Africa is learning how to build a more durable union.

I am inspired by Africa’s bold and ambitious youth. They are truly global citizens. The ECA Young Economists Network was created to honor them. We must create conditions for them to thrive on our continent.

It is with certainty today that we say that the path to a prosperous Africa is one that takes into account people, planet, and partnerships.  Now we must rally the financing needed to turn these hopes into prosperity – delivering on the Sustainable Development Goals.