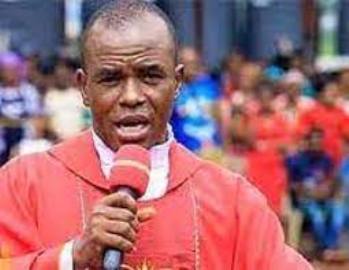 The Spiritual Director of the Adoration Ministry Enugu Nigeria (AMEN), Very Rev Fr Ejike Mbaka, has said that only the release of leader of the proscribed Indigenous People of Biafra (IPOB), Mazi Nnamdi Kanu, can lead to the end of Monday’s sit-at-home.

Mbaka said this during the Good Friday all-night programme where he lamented on the negative impact of the exercise, especially on businessmen and women.

He said: “We can not deny the fact that this sit-at-home is costing millions of money especially to business people, but we cannot also pretend not to know the solution.

“They should release our brother Mazi Nnamdi Kanu.

If he released today the sit-at-home will stop today. You can’t stop it by force; politicians tried it but it was in vain. They sit at home with their families every Monday and if they want to go out, they move with more than 20 trucks of security men.

“Anambra Government that tried to use force to stop it is feeling the heat today. So, let them release our brother Mazi Nnamdi Kanu and sit at home will stop.”

On ESN’ he said: “Since the past three years, this year is the year Enugu farmers could farm successfully.

May God bless our young men who cleared our farms from herdsmen.

“One of our priest’s large farms were messed up by herdsmen last year, he was crying, but this year he is smiling. May God bless our youths who made it possible for our people to farm again.”

IN CASE YOU MISSED THESE FROM NIGERIAN TRIBUNE

‘Officials initially offered to help but when the number of able-bodied citizens at the centre increased, they left us unattended to’
Why Ogun Tops List Of ‘Yahoo Boys’ In Nigeria ― Governor Abiodun
Police, Amotekun after criminals on Lagos-Ibadan expressway
Suspected cannibal pays N500,000 for boy’s human organs, says ‘that’s my favourite meal, especially the throat’
Court awards Nnamdi Kanu N1 billion over invasion of his home by military, asks FG to apologise
On Mazi Nnamdi Kanu, he first sang the emotional brotherhood song onuru ube nwa nne agbala oso (he who hears the cry of his brother should not abandon him).

Then he said: “He is our brother, we lifted our hands up to God to pray for his release.

We can’t run away from it, it is a situation that came up with our generation, we must face it.

“I heard the names of some people that were granted presidential amnesty but his name was not there. I wonder what his crime is. Let the Igbos who can go to request for his release, start the journey.”
https://tribuneonlineng.com/only-nnamdi-kanus-release-will-end-ipobs-sit-at-home-order-says-mbaka/