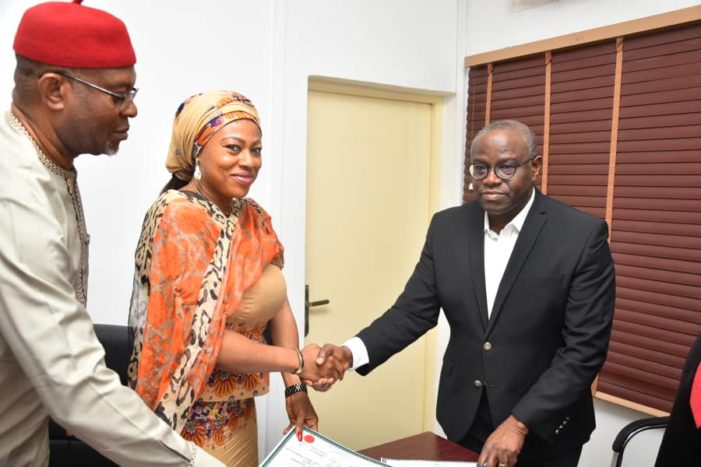 The News Agency of Nigeria reports that the certificate was presented by INEC National Commissioner, Prof. Okechukwu Ibeanu at the commission’s headquarters in Abuja on Tuesday.

Onuoha, speaking with newsmen shortly after the ceremony, dedicated her election to the people of her constituency and God Almighty, who made it possible.

She, however, said that she received the certificate with mixed feeling because of the killing that happened shortly after she was declared winner in the election judged to be free and fair, following techniques deployed by INEC to prevent rigging and violence.

“This election was a test run and it became a testament to the fact that when there is a will to execute a properly planned election, it is possible.

“It is a bitter tastes that after this wholesome and landslide victory, one of my strongest supporters was killed. What is topmost on my mind right now is the feeling of pain that I cannot explain,” she said.

Onuoha described the incident as a clarion call and a wake-up call to everybody, especially VIPs, and all being attached with armed security personnel, to be mindful of the actions and activities of their attached security details to make sure that they play by rules of engagement.

“There should be no indiscriminate or sporadic shooting, even in places of crowd. There are laid down strategies to control crowd.

” You have tear gas, you have pepper spray, stun gun. I think the use of gun is like the last resort. So that the lives of the people we are meant to protect are not put into danger,” she said.

Onuoha commended the police for taking immediate action by arresting the officer who was suspected to killed the victim, and commencing investigation, adding that “I believe that the true cause of that killing will be exposed and justice would be served.”

Onuoha, however, promised proper representation for her constituency, saying the people of Okigwe North were in dire need for quality representation.

“We are going to experience robust engagement with critical stakeholders that will usher in the best time for us in terms of developments, quality bills, participation in the house.

” Proper representation that will usher in inclusive governance ranging from participatory constituency projects in accordance with the earnings and aspirations of my people,” she said.

On the demand for review of the Electoral Act, Onuoha promised to given her support in the review process.

“Like I said earlier the last election which brought about my victory, I saw INEC deploying some new and innovative tactics, methods and procedures to prevent some of unwholesome practices. I think it paid off.

“Those are some of the things that could be looked into. At my inauguration into the house you will see me playing actively roles in the areas of of such debates when it comes up with the floor.

” You know it is a multi-faceted approach. It is not cast in stone. As events and time unfold, we will attack it critically considering the best interest of our people and in line with electoral best practices worldwide,” she said.

The All Progressives Congress (APC) National Organising Secretary, Mr Emmanuel Ibediro, who witnessed the ceremony, congratulated OnOnuohaha on her victory at the poll.

Ibediro said he was part of the success story as Onuoha was not just a member of the APC, but going to represent his constituency.

He said he was happy that Onuoha won the election.

“It shows that the people believe in the APC and its leaders as well as President Muhammadu Buhari and his programmes.

“The election is an endorsement that our people have fully accepted the APC, as a party to be and a party for. the future,”she said.

Ibediro advised Onuoha to keep the spirit alive by fulfilling her campaign promises to the electorate.(NAN)