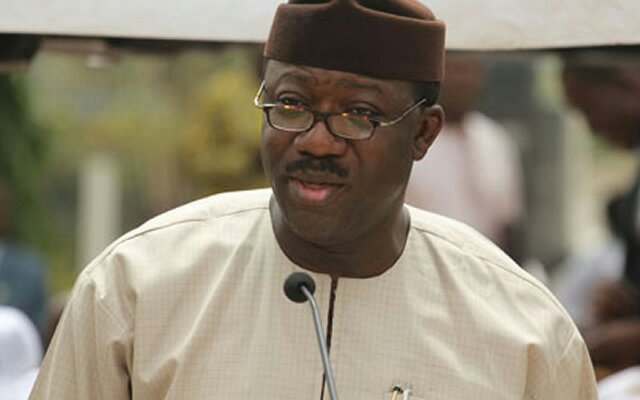 There have been rumours that Mr Fayemi was lobbying within the APC to succeed President Muhammadu Buhari in 2023.

The Governor of Ekiti State, Kayode Fayemi, has been endorsed to contest for president in 2023 by the ruling All Progressive Congress (APC) in Ekiti State.

The endorsement was announced on Saturday, during a programme organised by Olusegun Osinkolu, a chieftain of the APC, for 1,000 members of the party in Ekiti North senatorial district.

Speaking at the programme, Paul Omotoso, the Ekiti State APC caretaker committee chairman, reportedly said Mr Fayemi is competent enough to be the flag bearer of the ruling party following his commitment to good governance.

Although PREMIUM TIMES was not present when Mr Omotoso made his statement, it was reported by other newspapers present including TheCable.

Mr Omotoso was represented by APC publicity secretary in the state, Ade Ajayi, who said 2023 is Ekiti’s turn and the best candidate is Mr Fayemi.

He said Ekiti “would no longer play second fiddle in the south-west’s politics.”

“On the 2023 presidency, the time has come for president to come from Ekiti. That is why we are pleading with you to support governor Fayemi,” he said.

“Though Governor Fayemi has never said he wanted to contest, we will force him to plunge into the race, because of his competence, dedication, and loyalty to APC.”

There have been rumours that Mr Fayemi was lobbying within the APC to succeed President Muhammadu Buhari in 2023, but he has denied such rumours.

He said: “(Mr) Fayemi is never pushy; he just wants everyone around him to find peace and achieve happiness. The governor no doubt knows a lot of people and doesn’t fail to bring everybody together; he listens carefully and is sincerely interested in how everyone is doing”.

The governor’s spokesperson could, however, not be reached for comment on his principal’s latest endorsement by the Ekiti APC chieftain. Calls to his telephone number did not connect and he is yet to respond to messages sent to him.

This latest development by the Ekiti APC comes the same week that loyalists of Bola Tinubu, a national leader of the ruling party, formed a presidential campaign council codenamed, Southwest Agenda (SWAGA), and began lobbying for his candidature ahead of the 2023 presidential election. PREMIUM TIMES reported how the SWAGA team which includes ex-senators, other former lawmakers, and prominent politicians from the South-west, visited monarchs in Oyo State to lobby for Mr Tinubu.

Like Mr Fayemi, Mr Tinubu has also not formally declared that he would run for election as president.

The APC is yet to formally announce its policy for the 2023 presidency as President Buhari completes his second term in office and is not eligible to seek re-election. There have been debates on whether the presidency should be zoned to Southern Nigeria after Mr Buhari, a Northerner, completes his eight years tenure. Mr Bello has also not declared any presidential ambition.