Mobile theatres aim to stem the migrant crisis through film 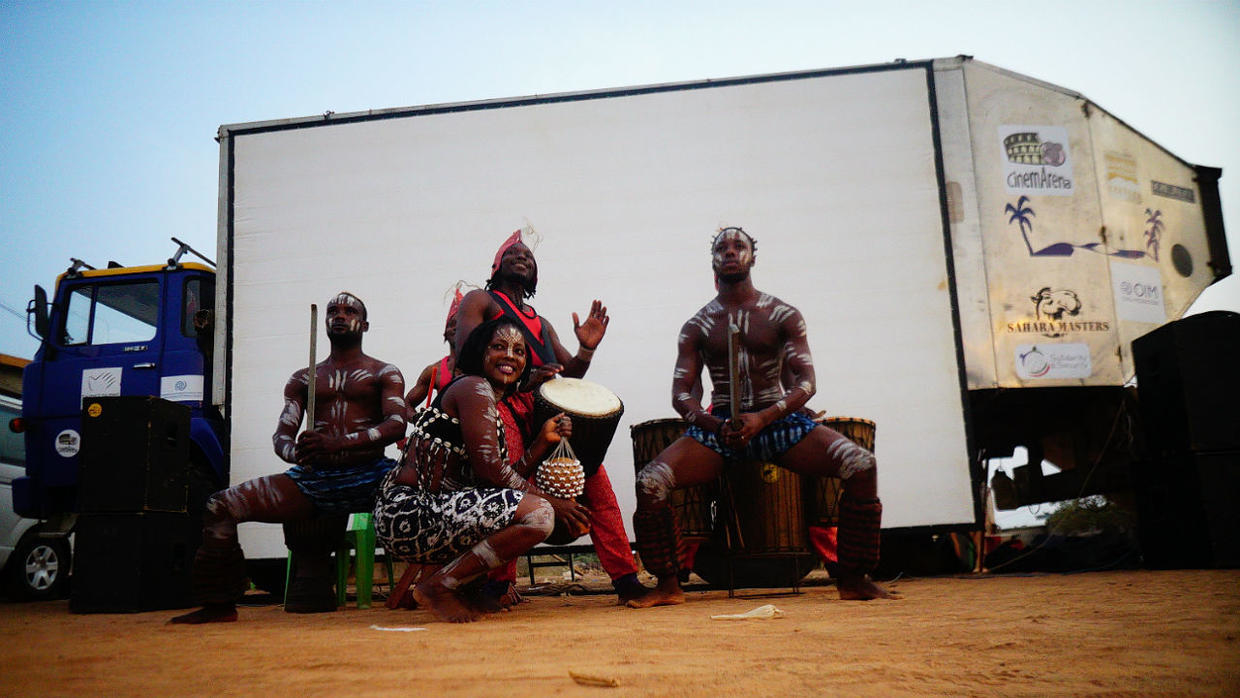 Hundreds of people gather around a dusty square in Daloa, in the Ivory Coast, transfixed by films projected onto the side of a giant truck. It is part of the Cinéma du desert project, which aims to educate West Africans about the dangers of making the perilous journey to Europe.

Children giggle and applaud as one of the cartoon characters on screen, a coxer (human trafficker), proclaims: “Quit your job and leave! People will employ you to work at the Eiffel Tower … You will become a millionaire very, very quickly.”

As the evening wears on, the films give way to documentaries featuring graphic accounts of beatings, sexual assaults and death in the desert and at sea. The crowd falls silent.

According to the UN’s International Organization for Migration (IOM), there are about 8.4 million migrants in West Africa. While most of these people move intra-regionally, significant numbers also try to reach Europe – risking their lives on a perilous journey.

Ivory Coast is the country from which the second-largest population of West African migrants originate, with 526 Ivorians arriving on the Italian coast between January and May 2018. Countless others perished before they could get there.

The Cinéma du Desert is trying to change that. The brainchild of Italian Davide Bortot, 34, the mobile cinema has moved around West Africa by truck for more than a decade. In 2009, while travelling through Mali to deliver supplies to NGOs, Bortot was stunned by the welcoming attitude of the local population.

“In every village, people wanted to invite us into their homes,” says Bortot. “To give something back, we thought about screening a movie. We stopped near Timbuktu and showed Alice in Wonderland. People went crazy and we had to keep playing films all night long.”

Since then Cinéma du Desert has covered more than 150,000km, showing films from Siberia to Mauritania. In 2017, the Italian Government asked the Cinéma to broadcast an awareness campaign about the perils of migration through a project called CinémArena. It first held 110 screenings in Burkina Faso and hopes to have screened films for at least 20,000 people by the end of its latest campaign in Ivory Coast.

Parking up in Daloa, a bumpy six-hour drive northwest of Abidjan, Bortot and his team begin hoisting a screen over the side of the truck and setting up speakers. Before long a crowd gathers. The town of about 300,000 is an important hub for those making the journey to Europe.

The evening starts with live dance performances. Shortly after, an Ivorian IOM official, Souleymane Barthé, explains the purpose of the evening – to raise awareness of the dangers of clandestine immigration.

“We are working with the cinema mostly to raise awareness of the tragedy that migrants live,” he told FRANCE 24. “In Africa, cinema is an important way to communicate because even illiterate people can be informed directly of the dangers.”

During intermission, Barthé asks the crowd what they think of the films. One man takes the microphone, stands up, and exclaims: “There are no jobs here. How can we stay if there are no jobs?”

His sentiment rings true for many in the audience. The vast majority of Ivorian migrants are young men under the age of 35. Around 90 percent of those who leave the country say they do so to find better-paying work.

Barthé estimates that projects like the Cinéma du Desert have a positive, if unquantifiable, impact.

“We have not tested the effectiveness of this project, but I think it is. People tell me that they were unaware of the dangers before watching the documentary,” he said. “In Daloa, it is often viewed by mothers, who before were calling for their children to leave.”

In 2018 the Italian interior ministry, then headed by right-wing populist Matteo Salvini, signed off on a new wave of funding for CinémArena via the IOM. Cinéma du Desert was one of a number of mobile cinemas to show films in five West African countries. The motivations of an anti-immigrant populist like Salvini may be clear, but Bortot says that does not matter.

“Even if one person gets more information to be able to think about what he is doing, it is a good thing. The main point is not to lose your life, or become a slave in Libya, or cause your family financial difficulties – the journey is always more expensive than you think.”