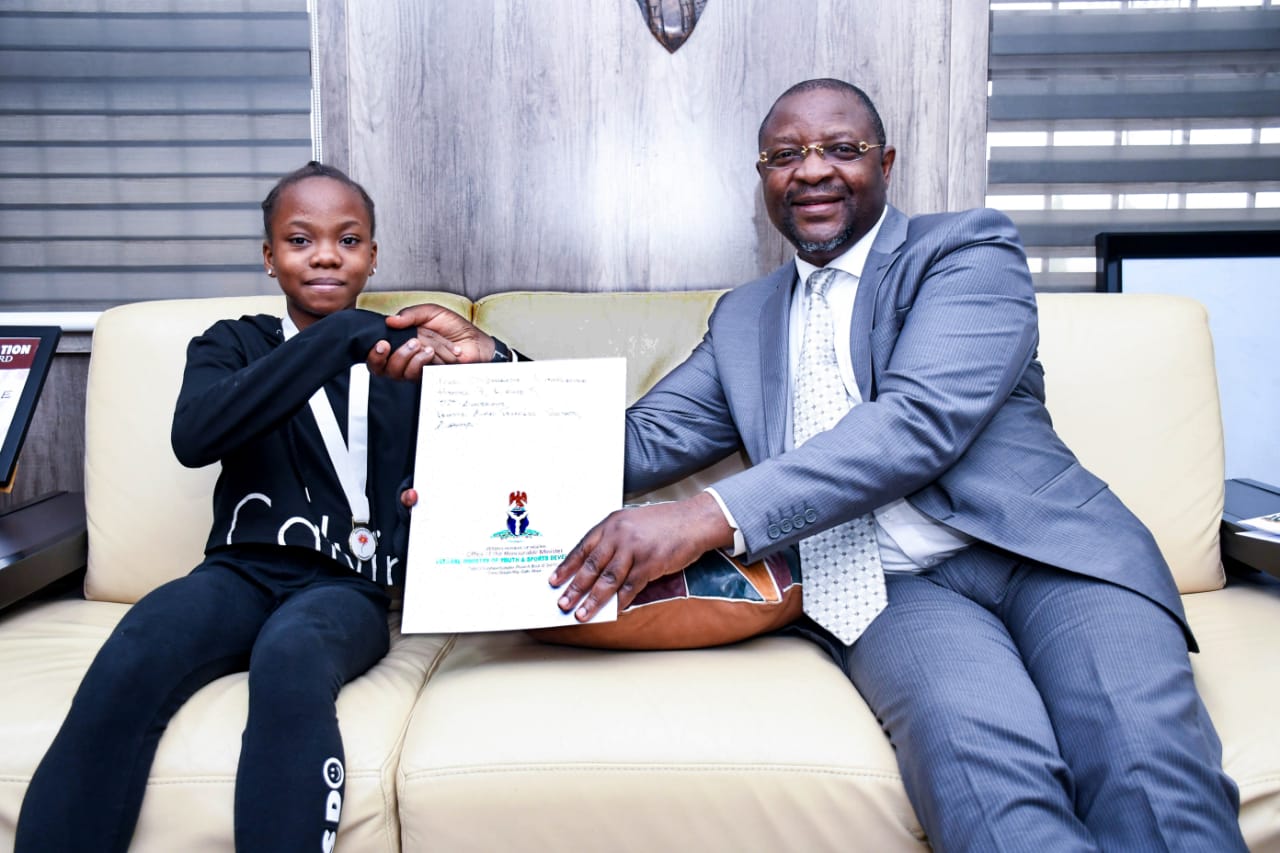 The Minister of Youth and Sports Development, Mr Sunday Dare, has presented Nigeria’s young African Gymnast, Stephanie Onusiriuka, with the sum of N250,000 and a letter of commendation, following her recent accomplishment at the African Championships held in Pretoria, South Africa,.

Dare who made the presentation Wednesday in his office in Abuja, when the young Gymnast, accompanied by her Coach and mother, Mrs Amaka Onusiriuka, paid him a courtesy visit, described her as a true Ambassador of sports in the country.

According to him, “The Ministry has been monitoring the performance and progress of the eleven year old African Champion Gymnast ever since she participated at the National Youth Games, Ilorin in 2019 where she won a Bronze medal.”

He stated further that “the Ministry was also following your performance during the Edo 2020 National Sports Festival. You won 1 Gold medal, 2 Silver medals and 1 Bronze medal, and you were adjudged to be the second best all-round Gymnast.”

While commending the performance of the young Gymnast, Dare assured that the Ministry was prepared to take her to the Olympics by the time she turns 13, just to watch the Games alongside side the young swimmer who he referred to as “the fish”, with a view to spurring them to higher heights in their various sporting fields.

The Minister added that Onusiriuka is part of the Ministry’s Talent Hunt Programme which is an initiative of the present administration.

“You are a part of our Talent Hunt Programme and the Ministry will keep supporting your international trips,” he added.

Dare also appreciated the Chairman, Airpeace Airline, Mr. Allen Onyema, who promised Stephanie Onusiriuka, free tickets for all Airpeace destinations for her trainings and competitions and called on all sports loving philanthropists to lend such supporting hands to budding talents.

He reiterated President Muhammadu Buhari’s administration’s determination to the development of grassroot sports in the country with a view to building formidable sporting teams for our nation.

Speaking earlier, the mother and coach of the promising young Gymnast, Mrs Amaka Onusiriuka, said Stephanie practices at home everyday and in the Stadium every Sunday from morning to evening.

Mrs. Onusiriuka who further disclosed that the teen has another championship at Liverpool in October, and training tour in Japan, added, “she has gotten all the necessary equipment for her training at home”.