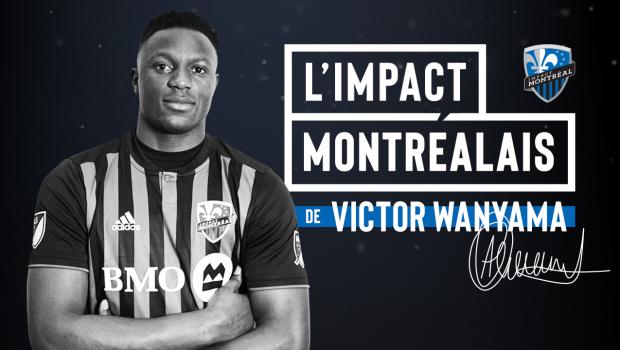 MONTREAL – The Montreal Impact announced on Tuesday that the club has come to terms with Kenyan international midfielder and team captain Victor Wanyama as a Designated Player, following a free transfer with English club Tottenham Hotspur FC. He signed a three-year contract with the club. He will join the club upon receiving his international transfer certificate and passing his medical.

The Montreal Impact previously had acquired the discovery rights to Victor Wanyama from the New England Revolution in exchange for $150,000 in 2020 General Allocation Money.

“Victor is an important player with a great career,” said Sporting Director Olivier Renard. “His undeniable experience will also help support the young players and help them progress.”

“I’m really happy to join an exciting club like the Montreal Impact,” said the new Impact Designated Player, Victor Wanyama. “MLS continues to grow every season and I’m looking forward to bringing further awareness to this team, city and league across Africa. When I spoke to Thierry and he told me he wanted me to join him in Montreal, I didn’t have to think twice. He has always been a player that I’ve admired, and I am really happy to get the opportunity to work with him and to play a part that can ensure that the Montreal Impact have an improved season and hopefully reach the ultimate stages of the competitions in which we compete. I think the Saputo family and the management team in Montreal have a great plan in place and I am hoping I can make a great contribution to the success of this project.”

Wanyama, 28, joins the Impact after playing four seasons with English club Tottenham Hotspur FC, where he registered six goals and one assist in 69 regular season games, including 47 starts, and 4,385 minutes. He was part of the team that reached the 2018-19 UEFA Champions League Final, appearing in five games in the knockout stage, starting three, against Borussia Dortmund, Manchester City and Ajax. He was dressed but not used in the final against Liverpool, last June 1, 2019. He played in 13 UEFA Champions League games, two Europa League games, nine FA Cup games and four EFL Cup games with the Spurs. He won the Premier League Goal of the Month for February 2018, following a stunning strike against Liverpool.

He previously made his English debut with Southampton F.C. in 2013, becoming the first Kenyan player to appear in the EPL. In three seasons with the Saints, he recorded four goals and two assists in 85 Premier League games, including 74 starts, and 6,515 minutes. He also took part in three Europa League qualification games, three FA Cup games and six EFL Cup games.

He started his career with Kenyan clubs Nairobi City Stars and AFC Leopards in the Kenyan Premier League in 2006 and 2007, before joining Swedish club Helsingborgs IF U21 team.

At the international level, Wanyama has scored seven goals in 56 games with the Kenyan national team, repeatedly wearing the captain’s armband since 2012. He made his senior debut in 2007 at 15 years old. He started three games in the 2019 Africa Cup of Nations and has appeared in several World Cup and AFCON qualification games throughout his career.

Transaction: The Montreal Impact has come to terms with midfielder Victor Wanyama as a Designated Player, following a free transfer from English club Tottenham Hotspur FC. He signed a three-year contract with the club.