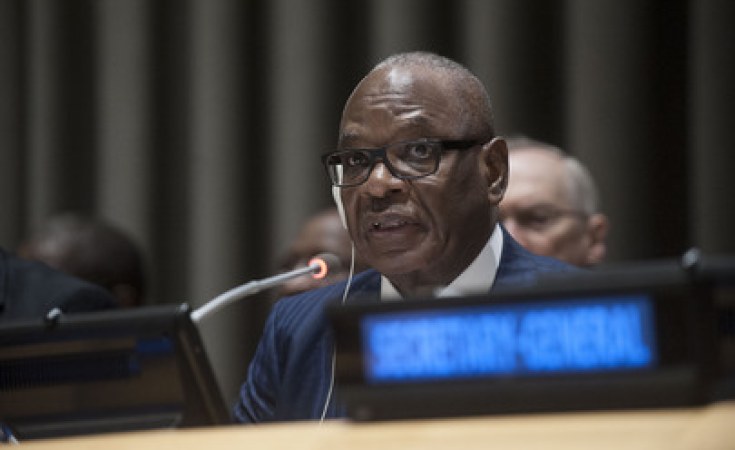 Former Malian President Ibrahim Boubacar Keita returned home before dawn, a family member said Thursday. He had been detained for 10 days by the ruling military junta that staged a coup last week.

Keita, 75, reportedly tended his resignation after his ousting.

Former Nigerian president Goodluck Jonathan, involved in talks with Mali’s military junta, intimated that Keita’s release was a signal that the junta was trying to “meet some of the demands of ECOWAS” to avert sanctions.

The 15-nation West African bloc is set to meet Friday to discuss an immediate strategy. The main demand is that Mali’s junta put in place an interim government, with elections in one year’s time at the latest, to restore civilian rule.

The junta, calling itself the National Committee for the Salvation of the People, proposed staying in power for three years.

It justified its mutiny because of insecurity, in part due to Islamist insurgents in Mali’s vast central and northern swathes.

The junta on Thursday released a degree signed by leader Assimi Goita that installs “provisional authority and lays the foundations for a rule of law.” It says the law is necessary given the dissolution of the National Assembly and the government.

In a parallel incident on Thursday, four Malian soldiers were killed and 12 wounded near the town of Konna, near the Niger river but some 600 kilometers (400 miles) northeast of the capital Bamako, said Mali’s army. Reinforcements had been sent, it added.

The 13,000-strong United Nations peacekeeping force MINUSMA in Mali, which includes German units, said its leaders had visited Keita at his home on Thursday.

On Wednesday, the International Organizatin of Francophonie — representing the world’s French-speaking nations — suspended Mali, pending a visit by a delegation.

From Mali’s capital Bamako on Thursday, the French news agency AFP reported that for many Malians communal life was “little” changed.

The only major change had been a curfew, imposed from midnight to 5 a.m. but, it added Bamako’s streets are “invariably deserted” and few have “any money for late-night merrymaking,” given Mali’s meagre informal economy.

In contrast, Mali’s neighbours, fiercely opposed to Keita’s ouster, had closed their borders and halted financial and trade flows.