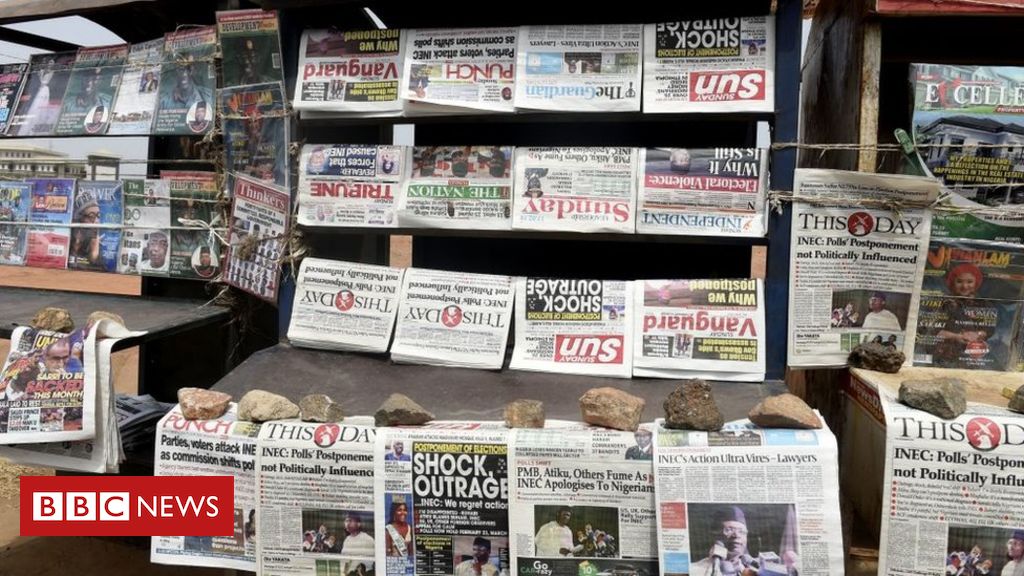 In our series of letters from African writers, Nigerian novelist Adaobi Tricia Nwaubani reflects on the impact that fabricated news stories can have.

It described how David Oyedepo, founder of Winners’ Chapel, and one of Nigeria’s revered and influential religious leaders, allegedly threw a tantrum at the US consulate in Lagos after he was refused a visa.

According to the story, the bishop was “obviously flustered”. It quoted an unnamed source as saying that the religious figure had “immediately sent for his bodyguards to get his phones so he could make some calls”.

In a country where religious leaders are celebrities, and their every action or inaction scrutinised, the detailed story quickly went viral.

Comments on, and criticisms of, Bishop Oyedepo’s alleged behaviour poured out.

But there was one problem; the ThisDay story turned out to be completely false.

“False news alert,” the US embassy said in a widely published statement, referring to the alleged visa row.

“If you have seen this manufactured item in the media, help defeat this misinformation by communicating to everyone that it is completely false.”

A spokesperson for Winners’ Chapel also released a statement, saying that the bishop had a valid US visa, so there was no need to have visited the consulate.

A few days later, ThisDay published an apology, then suspended the journalists responsible for the story.

“The two deputy editors failed to follow the well-established traditions of carrying out the necessary checks and confirmations expected of personnel of their status in a sensitive story of that nature,” the management said.

After the outrage at the original story came the disgust.

“How could such a sensational story, about such an influential figure, have escaped the attention of gatekeepers at such a high-profile organisation?” people asked.

The received wisdom was that while a certain recklessness is to be expected of stories published on social media, an established newspaper ought to be more responsible.

If only this was a one-off.

Working as a journalist in Nigeria is tough – even getting officials to confirm basic details can be hard. In the face of this, many maintain high standards.

Nevertheless, that is no excuse for malicious fiction to be presented as fact, as is too often the case in some newspapers here.

Writing in his 2013 autobiography, state governor Nasir el-Rufai described an incident that took place years ago, when he was the mayor of the capital city, Abuja.

“I came into my office and saw something that looked like a small tortoise on my seat,” he wrote.

“This was supposed to be some voodoo curse meant to scare me… I just removed it, settled down and started working.”

But this was not the end of the matter.

Mr el-Rufai continued: “The very next day, one Nigeria newspaper, the Daily Times, had a story about how I came into my office, saw a tortoise, and collapsed, and had been flown out abroad in a coma…

“My [head of security] wanted [the reporter] arrested, but I did not see any sense in that.”

People I know have had incredibly dangerous lies published about them”

While government officials, like Mr el-Rufai, usually have at their disposal state forces they can use to vent their frustrations on offending journalists, the average Nigerian does not.

At various times, people I know have had incredibly dangerous lies published about them, and the best they could do was phone around to all their friends and well-wishers and assure them that the stories were completely false.

Suing for libel would entail expensive litigation and drawn out proceedings.

Thus, Nigerians continue to endure the laziness of journalists willing to publish rumours picked up in bars and beauty parlours.

And the dishonourable nature of those who, in exchange for lucre, plant unsavoury stories calculated to embarrass the payer’s enemies.

There is no suggestion that this happened in the case of Bishop Oyedepo.

In April 2012, the message carried in one of their video releases had been distorted in some local media reports.

In response, the jihadist group took direct action and bombed two newspaper offices, including a branch of ThisDay.

While claiming responsibility for the carnage, a Boko Haram spokesperson said: “Each time we say something, it is either changed or downplayed.”

Journalists should not live in fear for their lives if they get something wrong, but they should be very careful about making mistakes.

Life is hard for reporters here. At least 19 journalists and bloggers were arrested in Nigeria between January and September 2019, according to Amnesty International.

That is troubling, and the government of President Muhammadu Buhari definitely needs to improve its record on freedom of the press.

But at the same time, some people at the helm of journalism need to improve their record on fact-checking.

There should be no place in the newsroom for tall tales.