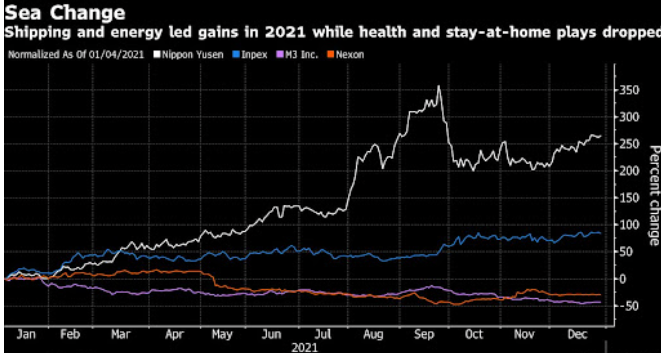 Reopening plays led gains in Japan’s equities market this year while 2020’s pandemic winners like healthcare and stay-at-home stocks dropped to the bottom.

Shipping stocks topped advancers on the Nikkei 225 Stock Average, and commodities-related groups were among the best performers on the Topix. Drug and video-game makers tumbled meanwhile, and market titans SoftBank Group and Fast Retailing also ranked among notable decliners.

Looking ahead to 2022, JPMorgan is bullish on automakers, saying their earnings should recover as supply-chain problems fade. The broker also likes real estate on a boost from rising domestic inflation, while it sees a capex recovery benefiting machinery and IT services, strategists including Ryota Sakagami wrote in a November 30 report.

Here’s a look at some of the most significant Japanese stock moves in 2021 (year-to-date share moves shown in brackets):

Reopening economies have lifted crude futures by about 50% this year, which has in turn helped shares of energy-exploration firms including Inpex.

A rebound in travel and tourism helped drive demand for Citizen’s watches and Nikon’s cameras, while the latter has also benefited from expectations for further growth in its chip-related business.

While Tesla may be the biggest headline generator in the electric-vehicle space, Japan has a couple of EV plays that have quietly rivalled the US giant’s advance this year. Toyota Motor’s electrification push should drive sales at its largest parts affiliate Denso, while Fuji Electric is seen to have a competitive edge in EV power chips.

Healthcare was hit hard as investors started to look beyond Covid-19. Last year’s biggest Nikkei winner M3 was this year’s biggest loser, as the market dialled back bullish forecasts for its online health-related businesses. Pharmaceuticals was the worst-performing Topix sector, and Chugai tumbled the most among the major drugmakers after a nearly fivefold gain over the previous four years.

Masayoshi Son’s company is Japan’s most-direct proxy to the sell-off in Chinese tech giants amid Beijing’s regulatory crackdowns. On top of the plummeting value of its investments in companies including Alibaba Group and Didi Global I, SoftBank was also hurt by a six-month pause in its supportive stock buybacks.

Nexon led game makers as people returned to their offices and schools, in addition to issues with Chinese regulatory approvals. The return to more normal lifestyles was also bad news for food-delivery website operator Demae-Can, driving its shares down 72% to rank lowest on the Jasdaq for 2021.

The Uniqlo operator was hurt this year by sluggish business in Japan and China as well as continued coronavirus flare-ups globally. It also encountered consumer boycotts related to Xinjiang labour issues and a surge in cotton prices.