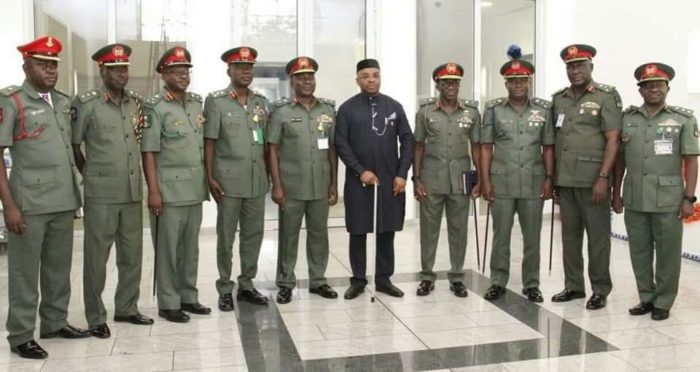 Gov. Udom Emmanuel of Akwa Ibom state has identified building of a viral economy through multilevel industrialisation for wealth creation and stemming youth unemployment as panacea to insecurity in the country.

The state Governor stated this during a courtesy visit on him by a delegation of the Nigerian Army Finance Corps at Government House, Uyo recently.

He used the occasion to thank the Armed Forces for the peace enjoyed in the Country and commended the Commander in chief of the Armed Forces and the Chief of Army staff for putting in place an effective security architecture to combat all forms of security challenges for the well being of the citizens.
Governor Emmanuel lauded the visiting army finance corps for initiating efforts to seek alternative sources of funding for its operations, describing the theme of 12th biennial conference, ‘Expanding Roles of the Nigerian Army in the Internal Security Operations, Funding imperative’ as apt given the present economic situation in the country.
He thanked the army hierarchy for the choice of the state for the conference.

Governor Emmanuel said his administration has lent support to the army and officers serving in the state, listing such support to include rehabilitation of 80 housing units for the officers at the Wellington Bassey military barracks, Ibagwa – Abak.

He assured of additional 80 units of housing in the second phase with the provision of potable water to make life comfortable forresidents in the barracks alongside other incentives to boost the officers morale in their service to the fatherland.

Earlier, the General Officer Commanding 6th Battalion Maj.Gen Jamil Sarham who represented the chief of Army Lt.Gen. Tukur Buratai, expressed appreciation to Governor Emmanuel for the support given to officers and men of the Nigerian Army to boost their morale to serve better.

He applauded the cordial relationship existing between the army and the citizens, attributing this feat to the sound leadership in the state as well as endearing hospitality of the people.

He lauded thestate government for collaborating the army for a strong security architecture in the state, noting that the choice of Akwa Ibom for the 12 th edition of the biennial conference was to further boost the existing collaboration and to key in to the investment expertise of the Governor.