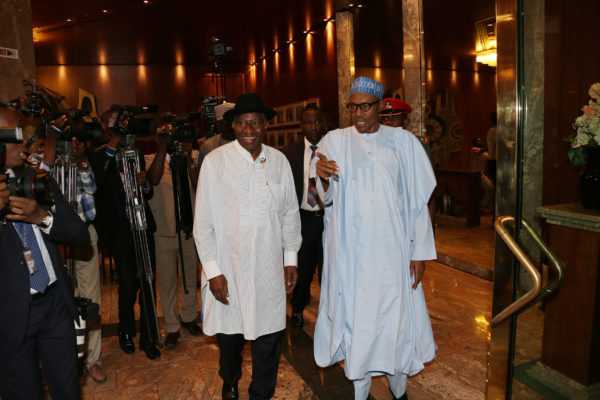 Former President Goodluck Jonathan on Thursday paid an unscheduled visit to the Presidential Villa, Abuja, where he briefly met with President Muhammadu Buhari.

The News Agency of Nigeria (NAN) reports that the meeting between Buhari and Jonathan, which was held behind closed door, lasted for about 10 minutes.

NAN reports that Jonathan’s mission to the villa was unknown as he did not speak to newsmen.

NAN, however, gathered that the former president was on a “thank you” visit to the president, who recently consoled him over an attack on his country home, Otuoke, Bayelsa, by unknown gunmen last December.

Buhari immediately put a call through to his predecessor to sympathise with him over the attack.

President Buhari reassured Jonathan of his safety and security.

During the attack, three of the gunmen were killed, while a soldier also died.