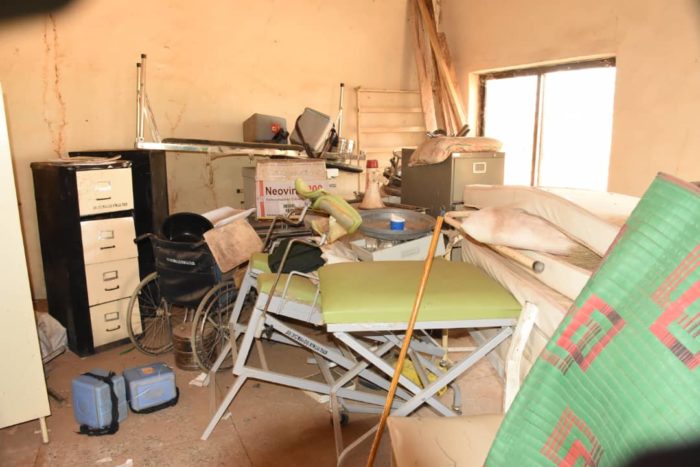 In spite yearly budgetary allocation to the health sector in Jigawa, especially for the upgrade of primary healthcare centres, many of the health facilities are in terrible state of decay.

Statistics made available to the News Agency of Nigeria (NAN), by Mr Bayoro Kyamba, Director, Planning, Research and Statistics, Jigawa Ministry of Health, showed steady release of funds to the Ministry.

The statistics released by the Director, Planning, Research and Statistics, covered 2015 to 2019.

The 2018 appropriation was N138.67 billion, while N6.7 billion was earmarked for capital investments in the health sector.

In 2019, the state’s budget was N157.54 billion, 13 per cent of the total proposed budget was earmarked for the health sector.

This consisted of N10.6 billion for recurrent expenditure and N9.4 billion for capital investments, while N2.8 billion was allocated to primary healthcare and maternal programmes.

However, checks from some of the local government areas, showed that in spite the yearly allocations, healthcare facilities, were in state of disrepair.

Mr Shapiu Saidu, the Officer in Charge (OIC) of primary healthcare centre, Tsirme village, in Kiyawa Local Government Area, told NAN that the centre was built over 30 years ago.

NAN reports that Jigawa was carved out from Kano State by the then Military Head of State, Gen. Ibrahim Babangida in 1991.

Saidu said that the village primary healthcare centre needed a befitting structure, adding that “even if we don’t have new one, this one should be reconstructed to serve the people.”

The OIC said that about 834 general patients visited the centre in October, while 454 were male and 380 female.

According to him, in September, 782 visited the centre and out of this, 230 were male and 552 female.
Saidu said that the centre has only three workers, adding that this has put a huge burden on him and the other two.

“We also need laboratory technician, the government should supply us medical facilities, you can see that the roofs have been blown off, we need equipment to safeguard our vaccines,” he stated.

However, when NAN correspondent visited Jaudi primary healthcare centre, no worker was around as at 8:30 a.m.

Most of the workers were said to have gone to Dutse, the state capital for the weekend.

Efforts by the security man at the centre to call one of the staff who lived around the area were abortive, as she was said to have also gone to Dutse, the state capital.

Some of the services the centre claimed to render are: Out Patients Diagnosis (OPD), Immunisation, Antenatal care, Referral System/Out Reach.

The building inaugurated on March 23, 2017 by then Gov. Muhammad Badaru, was in bad shape due to poor maintenance.

When NAN called Mr Abubakar Bello, the Officer in Charge (OIC), he said he was in Dutse.

Also at Garkon village healthcare centre in Andaza Local Government Area, it was under lock when NAN correspondent visited.

The windows were left opened, and a view from outside showed that the inside was replete with ramshackle facilities.

A man who identified himself simply as Suleiman was approached for comment on the status of the centre; he stated that the people manning it hardly come on weekends.

Asked if in case of emergency what the villagers would do.

Suleiman said they would call any of the staff on phone to attend to the patients.

He stressed the need to deploy more manpower to the area as well as encourage the already existing workers.

However, at Aujara, in Jahun Local Government Area, there was large turnout of patients, while medical personnel were around to attend to them.

Mr Shehu Muhammed, the Officer in Charge (OIC) said that the centre has 19 workers, plus a corps member, who is a medical doctor.

According to him, there is high number of attendees, so we need infrastructure, equipment, drugs as our drug are not enough.

“Our maternity side is very small, we need a bigger one to accommodate patients because as at now we only have four beds at the maternity ward and two in labour room,” he stated.

Muhammed said that the centre usually had between 150 to 160 deliveries monthly, adding that the large number made it imperative to have more beds and a bigger delivery room.

According to him, the state government gives N10, 000 monthly overhead to the centre.

On the record of patients that visited the centre for the month of August and September, the OIC stated that 5,638 was the general figure for August while 6,339 was recorded in September.

He said that some of them were included in the budget for upgrade.

According to him, before the end of the year, most of these facilities will be fixed.

The commissioner stated that the policy thrust of the state government on health was to ensure that every ward in the state has functional primary healthcare centre.

“We met some primary healthcare and clinics centres on ground, they were many that were dilapidated when we came in, and so we started the process of improving the facilities, renovating them to ensure that they are habitable.

“We have done so many of them, and then we also said that every ward that does not have one functional primary healthcare centre, we construct one, so we constructed additional 87.

“And that the last batch was 25 which were constructed this year and we are just about to open up those 25.’’
He acknowledged that there was shortage of manpower at the primary healthcare centres, stating that the government would address the issue.

According to him, there are challenges on our human resources, but we are doing all we can to ensure we solve that particular problem.

“We recruited 600 additional primary healthcare workers and posted them to various facilities to ensure that we bridge the manpower gap at that particular level.’’

He said that there was increase in the number of women that access facilities for antenatal care, and women who delivered on the facilities.

He said that this was as a result of favourable government policy, of releasing N75million monthly to the Ministry of Health for free maternal and child health.

“So every woman that gets pregnant should have free facilities until delivery, and any child that is under five have free services.

“This has helped in increasing access to the facilities and has also helped in maternal and child mortality.’’
Umar said that the state got $1.6 million World Bank Save One Million Lives grant, adding that part of the money had already been received.

According to him, the state government will use the money to continue to improve the health sector.

He said that the budget for the primary healthcare centres would be decided by the local governments without the state’s input, adding that the state would only assume a supervisory role.

With close monitoring and supervision, the allocations to the health sector will translate to improved services.
(NANFeatures)

**If used, please credit the writer as well as News Agency of Nigeria (NAN).