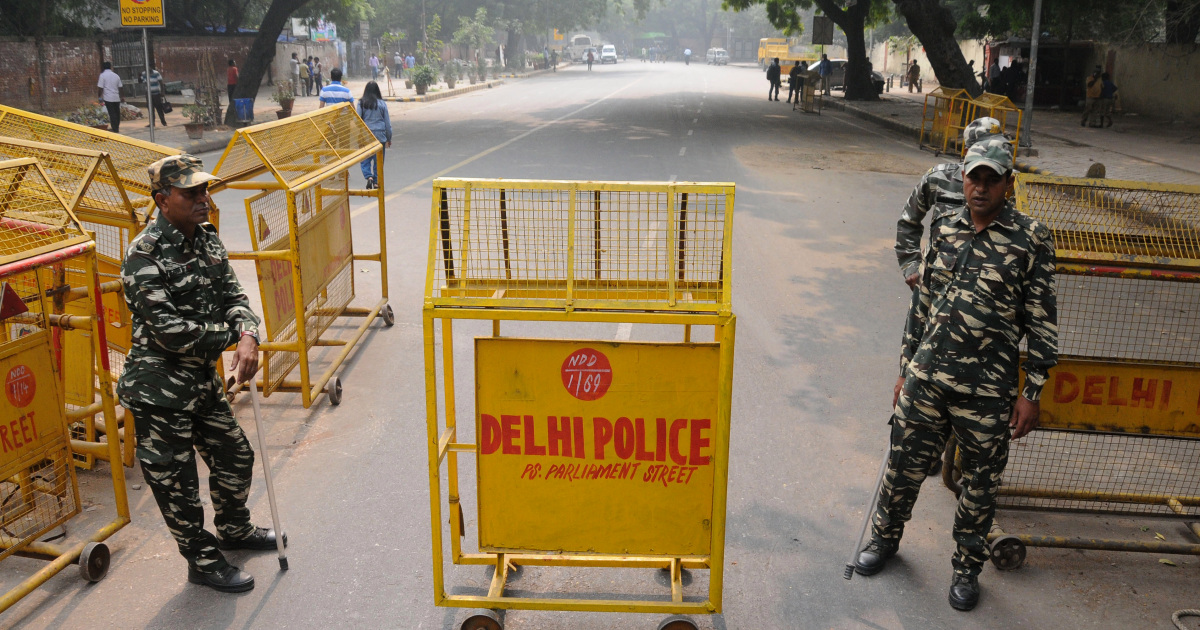 New Delhi, India – At least five people, including a former spokesman of India’s governing right-wing party, are in police custody over anti-Muslim slogans raised in the capital.

A protest, organised on Sunday by former Bharatiya Janata Party (BJP) leader and Supreme Court lawyer Ashwini Upadhyay, to demand the “scrapping of India’s colonial-era laws” turned into a demonstration against Muslims.

A mob of more than 100 people called for violence against the minority community at Jantar Mantar, a Mughal-era observatory that is a popular protest site.

Videos purportedly from the event showed a mob saying Muslims were “pigs” and calling for the “mass slaying” of the minority, which constitutes about 14 percent of India’s 1.35 billion population.

Among the slogans raised at the event were “Jab mulle kaate jayenge, wo Ram Ram chillayenge” (When Muslims will be slain, they will chant Lord Ram’s name) and “Hindustan mein rahna hoga, to Jai Shri Ram kahna hoga” (If you want to live in India, you must say Hail Lord Ram).

Ram is one of the most revered deities in Hinduism. A BJP-led movement to demolish a 16th-century mosque in the northern town of Ayodhya which, according to Hindu groups, stood on the site of Ram’s birthplace, catapulted the party to political prominence in the 1980s. The mosque was demolished in 1992 and Modi last year laid the foundation stone of a temple being built there.

A mob in the capital of this country is shouting, “Jab mulle kaate jaayenge, Ram Ram chillaayenge.”

Kindly instruct me with the curriculum of how this must be ignored.

On Monday night, Upadhyay and four others were “detained for questioning”, according to a Delhi police spokesman. The police had initially filed charges against “unknown persons” behind the event.

The event, held in the heart of the Indian capital and barely a kilometre (half a mile) away from India’s parliament building, has stunned New Delhi’s Muslim residents, who are still coming to terms with deadly riots the city witnessed last year.

In February last year, at least 53 people, most of them Muslims, were killed in the worst religious violence in the capital in more than 30 years.

The riots occurred during nationwide protests against a controversial law passed by Prime Minister Narendra Modi’s government in 2019, which grants Indian citizenship to non-Muslim minorities from neighbouring Pakistan, Bangladesh and Afghanistan.

Muslim Indians in the capital say there is increasing fear in the community because of the “impunity enjoyed by Hindu supremacist forces” in the country.

“It is happening at the behest of RSS which wants to create an atmosphere of perpetual fear and hatred against Muslims,” Mohammad Nasir, 34, told Al Jazeera, referring to the Rashtriya Swayamsevak Sangh, the BJP’s ideological fountainhead.

The RSS was formed in 1925, inspired by Germany’s Nazi party, in order to create an ethnic Hindu state in India.

“This is now almost like an everyday occurrence,” said Nasir, who lost an eye in an attack by a Hindu mob during last year’s violence.

Children as young as 10, with their parents joined the anti Muslim protests at Jantar Mantar today. Their poster reads, “Annihi|ation of Islam.”

Sahil Pervez, 26, who lost his father in the 2020 violence, says incidents like the one held at the Jantar Mantar have a “huge psychological bearing” on him and his family.

“We remain concerned about the safety of our family. We fear something worse happening with us. The situation has not improved since Delhi violence, it has rather worsened. How else did they dare to raise such provocative slogans?” he told Al Jazeera.

Shipra Srivastava, media head at Upadhyay’s Unite India Movement, which he says is aimed at replacing India’s colonial laws with “indigenous laws”, told Al Jazeera the group does not have a religious agenda.

“Some people tried to give it communal colour, but we dissociate ourselves from it,” she said.

On Friday, two days before the Jantar Mantar event, residents and Hindu groups in New Delhi’s Dwarka neighbourhood held a “Mahapanchayat” (Grand Council) to object to the construction of a Hajj House.

The government-funded building is meant to accommodate Indian Muslims before their departure on the annual pilgrimage to the Islamic holy city of Mecca.

Opponents of the plan at the meeting said the construction of the Hajj House would disturb the neighbourhood’s “brotherhood, harmony and peace” and would force Hindus to migrate by creating a “situation like Shaheen Bagh, Jafrabad and Kashmir”.

Shaheen Bagh, a mostly Muslim enclave on the outskirts of New Delhi, was the epicentre of the anti-citizenship law protests last year, led mainly by the neighbourhood’s women.

Jafrabad in northeast Delhi, another locality with a large Muslim population, witnessed some of the worst violence in last year’s religious riots.

Dwarka, where that mahapanchayat happened is home to many activists and organisations that like to protest in safety of Jantar Mantar or in Muslim areas. It’s time they focus on their neighbourhood. Try to cure the rot closer to home.

In the Dwarka gathering as well, provocative slogans were raised against Muslims, with multiple speakers even calling for mass killings.

The All Dwarka Residents Federation (ADRF), the body that spearheaded the protest, urged the Delhi government to cancel the allocation of land for the Hajj House in the “national interest”.

Ajit Swami, ADRF president, told Al Jazeera the building of the Hajj House would create “inconvenience for the local residents” and “any untoward incident can then lead to riots”.

“In our locality, there are very few Muslims. Now when Muslims go for Hajj, a single person is accompanied by hundreds of others. This would create inconvenience for the locality,” he said.

“Also, when they (Muslims) would come, they would eat biryani and chicken, which would lead to foul odour and disease outbreaks. In such a scenario, we will be forced to migrate.”

Swami said it was “not a communal issue but being turned into one”.

When asked about members of right-wing groups who attended his meeting, he said: “We did not call anyone to the protest. Several BJP members came on their own. We can’t stop anyone.”

The police in India’s capital, controlled by the federal home ministry, have been accused by rights groups of being complicit in last year’s violence.

Salute to this young reporter @anmolpritamND who despite being surrounded by a dangerous mob at Jantar Mantar refused to say ‘Jai Sri Ram’ when forced.Held his ground firmly,
When most TV personalities hv sold their profession, ds young man comes as a hope.Not everything is lost. pic.twitter.com/LDmBKQIxBK

Muslims in the city say hate speech and provocative slogans against them are being “normalised” as there is “no real intent” by the authorities to punish the culprits.

Activist Asif Mujtaba told Al Jazeera the “ease and frequency” with which such gatherings are taking place show their organisers are in “connivance” with the Indian state.

Opposition parties say the violence and hatred against Muslims are not a “fringe phenomenon” and are being “actively promoted” by Modi and his most trusted aide, Home Minister Amit Shah.

“These are not incidents that have happened in isolation. We have seen individuals associated with the ruling party not only making hate speeches and anti-Muslim remarks but also resorting to violence against the marginalised Muslim community,” Kavita Krishnan of the Communist Party of India (Marxist-Leninist) told Al Jazeera.