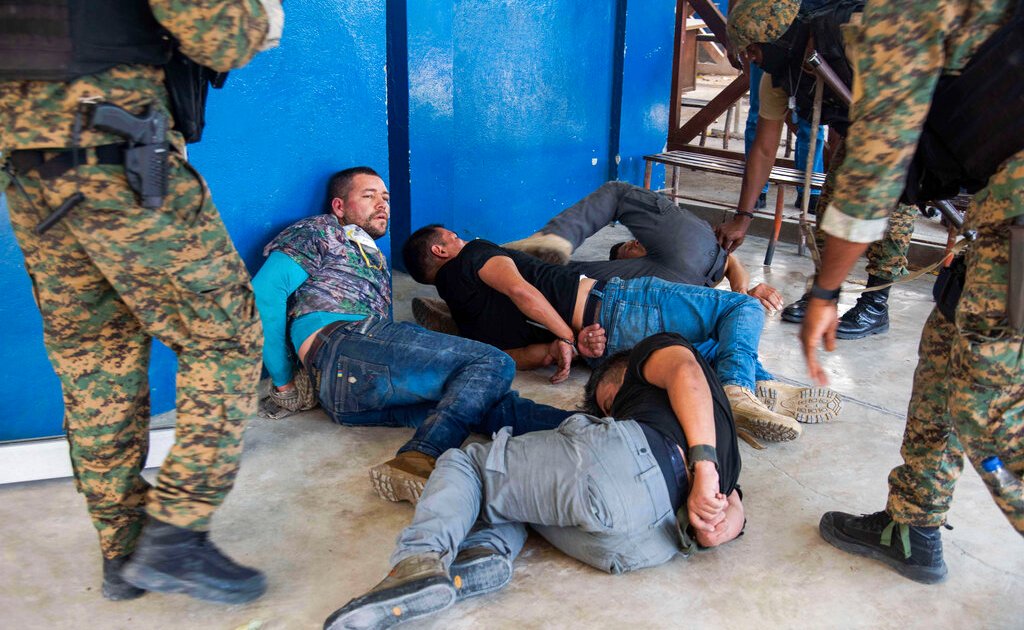 Law enforcement and intelligence agencies are probing ties of two Haitian-American men and a group of Colombian mercenaries to the assassination of Haiti President Jovenel Moise in the Haitian capital Port-au-Prince as a manhunt for a number of gunmen believed to be still at large continues.

The United States, Colombia and Interpol are joining a fast-moving investigation of the assassination after Haitian police arrested 17 members of a 28-man hit squad that Haitian police said assassinated President Moise on Wednesday.

Three Colombian mercenaries were killed and eight others were still being sought by Haitian police. The US is sending FBI agents and Department of Homeland Security (DHS) officials to Port-au-Prince.

“In response to the Haitian government’s request for security and investigative assistance, we will be sending senior FBI and DHS officials to Port-au-Prince to assess the situation and how we may be able to assist,” White House Press Secretary Jen Psaki said.

“The investigation is being led by Haitian police forces on the ground,” Psaki added.

Police paraded some of the suspects before the media on Thursday, along with Colombian passports and weapons they had seized. The head of Haiti’s National Police Leon Charles pledged to track down remaining gunmen as authorities launched an international investigation.

Haitian police identified the two Haitian-Americans as James Solages, 35, and Joseph Vincent, 55, as part of the heavily armed force that attacked and killed Moise in his Port-au-Prince home on Wednesday. Haiti First Lady Martine Moise was wounded in the attack and is being treated in a US hospital in Florida.

Haiti, the poorest country in the Americas, now has no president or working parliament and two politicians have claimed to be in charge as the country lurched into political chaos.

Colombia President Ivan Duque said on Friday he spoke by telephone with interim Prime Minister Claude Joseph to offer solidarity and pledge cooperation in the investigation.

“We offer all the collaboration to find the truth about the material and intellectual authors of the assassination of President Jovenel Moise,” Duque tweeted in Spanish.

Interpol had asked Colombia for information on former soldiers for their alleged participation in the assassination, Colombia Defence Minister Diego Molano said in a press conference on Thursday.

Molano ordered “the police and the army to immediately cooperate in the carrying out of this investigation to clarify these facts”, Molano said.

Police engaged in a gun battle with some of the suspected assassins on Wednesday at a house near the scene of the crime in Petionville, a suburb of Port-au-Prince. Eleven others were arrested at the Taiwan embassy on Thursday after they broke into embassy grounds.

New information was emerging on Friday about Solages, who had worked in his mid-20s as a bodyguard for a security company serving the Canadian embassy in Haiti, according to reports.

The two US citizens were not in the room when Moise was killed and said that they had worked only as translators for the hit squad, a Haitian judge said on Friday, according to the New York Times newspaper.

Clément Noël, a judge who is involved with the investigation and who interviewed both men soon after their arrest, said that neither was injured in the assault.

Public records show Solages, a naturalized US citizen, lived in Tamarac, Florida, near Fort Lauderdale, and does not have a criminal record. Solages has held security officer and firearm licenses, the Reuters news service and Miami Herald reported.

Solages thought Moise was “crazy” and blamed Moise’s refusal to step down from office for the deterioration in Haiti, Solages’ uncle Schubert Dorisme told reporters in Tamarac, according to The Haitian Times news outlet which posted audio of Dorisme’s remarks given in Creole on its website.

Two US law enforcement sources, speaking on condition of anonymity to discuss an active investigation, told Reuters on Friday that agencies were looking into the US connections to the killing, but declined to comment specifically on the two Haitian-American suspects.

“We further request for the Biden Administration to impose sanctions under the Global Magnitsky Act on all perpetrators who are directly responsible or aided and abetted in the execution of the assassination of the President,” according to a letter from the Haitian ambassador to Secretary of State Antony Blinken.

The US had announced a USD $75.5m grant of aid to Haiti in January and was providing an additional $5m to help strengthen the Haitian National Police work with communities against armed gangs.