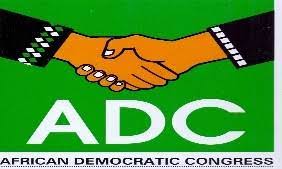 The African Democratic Congress (ADC) has accused the ruling All Progressives Congress (APC) of witch-hunt and plot to seal its national secretariat in Abuja through the officials of the Federal Capital Development Control (FCDA).

The opposition party said the ruling party was already in panic mood over its growing popularity and wide acceptability in the country which might determine the outcome of the 2023 general elections.

During the week, the ADC National Executive Council (NEC) at its Special meeting held Thursday, 25th August 2022, under the supervision of the Independent National Electoral Commission  (INEC), resolved to extend the tenure of its national officers.

But raising the alarm Saturday in Abuja through a statement signed by the party’s National Director of Communications and Programs, Barr. Ifenla Oligbinde, said some agents of other political parties, especially the APC, have started using unscrupulous ways to intimidate or blackmail the ADC.

The statement warned such “paid agents” to stop the act described as embarrassing, adding that ADC is not a commercial or business enterprise and there has not been any area designated by the FCT or Development Control where political parties can situate their offices.

“Following on the resolution by the ADC National Executive Council (NEC) to extend the tenure of National officers of the party during the Special NEC Meeting which held on Thursday, 25th August 2022, ADC has reported that the party’s steady progress towards the general elections has started ruffling several feathers.

“Some devious agents of other political parties have started using unscrupulous ways to intimidate or blackmail our party.

“Some unscrupulous persons have arranged to seal the premises of ADC under the pretense that ADC office is located in an area designated by FCDA as a non-commercial area.

“ADC is not a commercial or business enterprise and there has not been any area designated by the FCT or Development Control where political parties can situate their offices, as was done for embassies. The ADC Global Campus and Transformation Centre that serves as the party’s office, like many other political parties offices, is situated even in a more public place than most of the offices of APC/PDP.”

While warning that such intimidation will never succeed, the ADC said: “We have already dispatched a special letter to Mr. President, the Inter Party Advisory Commission and minister of FCT to take steps towards addressing such witch hunting and most repressible actions of agents of darkness.”