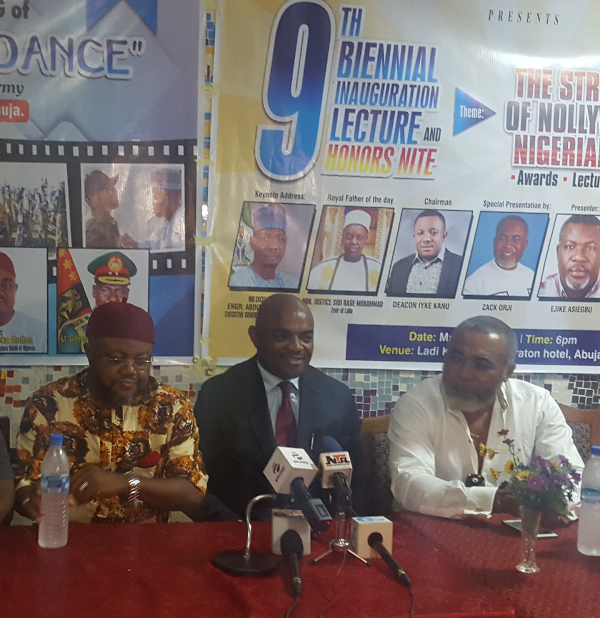 The Actors’ Guild of Nigeria (AGN) has produced an advocacy movie on the ongoing war against terrorism and insurgency by the Nigerian Armed Forces.

AGN President, Emeka Rollas, told newsmen on Friday in Lagos that the guild had resolved to encourage and support the military using their acting prowess.

“In our quest to provide opportunities for our members to thrive, we went into partnership with the Army.

“This was to produce an advocacy film on the activities of the Nigerian Army, especially in confronting insurgency and other security challenges facing our country.

“The title of the movie, ‘Operation Last Dance’, was chosen in connection with many operations launched by the Nigerian Army to tackle insecurity in the country,” he said.

The president commended media coverage of the AGN election, saying that the election had brought peace into the leadership of Nollywood.

“I wish to use this opportunity to thank you members of the fourth estate of the realm for the massive coverage of the national election and other AGN activities.

“The election produced credible men and women of repute saddled with the task of charting new cause for our guild.

“I am proud to inform you that total peace has finally returned to our guild.

“This peace is characterised by the leadership quality of the Government of National Unity headed by my humble self.

“The peace has thrown more challenges on the present elected national executive members as a lot of work has to be done to regain the lost glory and reposition our noble guild.

“The initial major challenges are to upgrade the welfare of members, create rare opportunities, improve capacity and skills development.

“Others are to articulate internal relationships, enhance full reconciliation and healing, encourage contractual practices and generally improve the livelihood of our members while making the future of our industry more sustainable.

“I spent most part of the end of last year in Los Angeles, New York, Nevada in USA to discuss partnership arrangements with relevant agencies and institution in pursuit of creating opportunities as well as capacity development for our members.

“I equally made similar visit to the British Equity. We are currently profiling our talents to major international casting agencies in UK, USA and Canada for possible international engagements.

“Also in our determined efforts to improve the health of our members, I am proud to announce to you that AGN is currently working assiduously to engage Axa Mansard as the official HMO,” he said.

He added that the AGN is organising a lecture to inaugurate the 9th National Executive Committee.

“The 9th Inauguration Lecture and Honors Nite will feature a lecture on the Strategic Role of Nollywood in the Nigerian Economy,”  he said. (NAN)